The weekend is upon us and I have limited boating news. The weather is back to being reasonably warm during the day so I hope to get out on the St Johns and do some boating this weekend, if we can have blue skies instead of today's grey clouds.

The 20th anniversary is coming next month, we will have a private dinner in the customary fashion with fine foods paired with even finer Ports and wines. Never fear, a large do is in final planning stages for 02 April. What that means is that printed invitations are going out to our friends and family which hopefully will make up for not having a proper wedding and reception back in February 1991.

The event will be held in the Astor Room at the Florida Yacht Club, there will be food and the music will be provided by Freudian Slip. We are excited to have acquired the services of such a fine band, usually we just hire a one man band like Mark Hart from  the Tradewinds Bar in St Augustine.  But our party has to be a special one and we wanted to have diverse music for dining and dancing.

By the way, Mark Hart is an incredible performer and has been a good friend to us over the years. Be sure to stop in and see him do his happy hour show, it is a wonderful way to see St Augustine. I hope this link works to hear a sample song.

As usual for me, I look forward to some wonderful weekends on the Barco Sin Vela and having fun with our friends, no matter where they be.

Please stay healthy, and I hope everyone has a wonderful Mid January weekend!
Posted by Barco Sin Vela II at 8:19 AM 4 comments:

I found this from Here.

Funny as can be... It would be great fun to cruise the St Johns on that boat. I can imagine the looks from shore. Especially tied up to the Jacksonville Landing, some self important gendarme would probably want to impress the tourists by "helping". 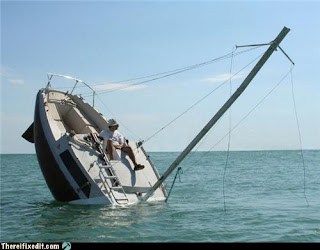 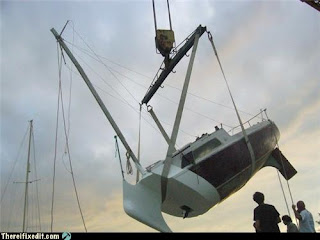 Still getting over the last week

Sorry for the long time-no-see. I caught whatever flu was going around last week which required me to stay home for recuperation, the period being from Wednesday to Saturday.

Saturday morning, I merely had a nasty cold which remaineth with me even now.

I got a phone call on Friday afternoon from John, the newest owner of my former sailboat, "Wildebeest III" (pictured above) which is now at Amelia Island getting a thorough going over before leaving for it's new home in Corpus Christi, Texas.

Only my old boat is called , "Hoydin".

The Spousal Unit and I drove the convertible car up US-1 to Amelia Island, top down hoping that the wind would help dissipate my cold, which it mostly did. That and two sudafed tablets.

I spotted the old boat while going over the bridge from Yulee. It was hard not to see the tall mast with the familiar blue sail cover on the headsail, with a white horizontal stripe midway down the roller furling. While walking down C-dock, a flood of memories came over me as I looked at familiar lines which haven't changed since I first gazed on them in 1996.

We privately commented how the boat looked like it did when we lived aboard, so long yet not so long ago.

John met us as we approached the boarding platform and we were quickly in the cockpit. I almost hoped that a couple of well fed and dearly missed Siamese Cats would soon bound up from below with welcoming yowls.

There were some minor differences; a  new solid framed cockpit cover, the cabin deck sole was solid instead of the familiar teak and holly. The heads were inop, as were the freshwater plumbing. Don't mention the wiring and battery system. Don't.

There will be much effort made to get this boat back in shape for the long cruise in the Gulf of Mexico. Not overwhelming,  just a big maintenance to-do list.

One neat thing was finding out the source of a pesky oil leak in the Perkins 4-108 motor; It was from a plugged off sensor in the lower block. That leak was a slow and messy one that I endured for eight years, and I sure was thinking about replacing the motor at one point. At least the motor is now 4.0 and ready to go.

I passed on as much info about that boat as I could; Fuel and Water tank quantities, sailing characteristics and discussed some of the repairs that had been made over the years. It was a great three hour visit that reminded me of what it was like when I was starting out on an unknown boat with little in the way of experience and skill.

At least John is in Florida where there are thousands of boat stores (And Home Depot) with parts and materials to get the jobs done. We had a very steep learning curve in London where most of the boat stores were on the Coasts. There is no waiting for supplies on the First Coast of Florida.

We went to have lunch at a bistro in Fernandina. I immediately started planning his trip across the Atlantic, recommending stops in the Azores, Portugal and Spain. I even started telling him when to leave, where to be at the times proper and appropriate for trade winds and following seas. Why, he could be in Portugal by June, travel Southward, down the coast and be in the Canaries by November. He could leave the Canaries a few weeks later and make the 20 day trip to St Lucia... Off to the Spanish Main, El-Caribe; with Voo-Doo and Hoo-Doo and all that crazy stuff. Pirates of the Caribbean!

Have we heard all this before? Sounds like I'm a broken record. I guess I get too far ahead of myself, always wanting to get out running at the sound of the gates opening. John has a lot on his plate in getting Hoydin underway and to learn how to sail her properly. So he can make his own plans and move forward according to his schedule, comfortably.

By the way, Hoydin means naughty girl. I like that.

Good luck to John and his boat, I envy him his next few years that will be full of adventure and learning. I know I would love to be on the Atlantic onboard that 1985 Morgan 43.