End of the week, nay--end of the month!

May always seems like a great month that does not want to end. You would think Memorial Day is a great way to wrap up the calendar but there is always a week afterwards to clean up the holiday mess.

I left on a long cruise (1991--USS Deyo, DD-989) two days after Memorial Day and we did not actually leave U.S. waters until June 1st. So our deployment was about seven months vice the usual (back then) six which was quite frustrating.

Time is a funny thing; When you are youngster, with mebbe less than a couple hashmarks on your sleeve, a year takes f o r e v e r to pass. Once you hit forty, a year is four distinct seasons that whiz by at double speed. At fifty, months are mere weeks. I could use a seven month deployment on a Destroyer right now. Because time on the ship is measured in the r i g h t now. I think I understand why the C.O. of the Deyo didn't mind  an extra month underway, or for that matter, the seven months we spent underway the next year doing Counter Drug Ops. To him, it was a mere few weeks of time while to us yung'ins, it was an eternity.

If I was deployed again, I would endeavor to not spend my in port evenings drinking the local beers, so as to wake up clear headed and not so ill from being over served.

Anywhoo, May is finally ending and I have paid all the bills and still have a few centimes left for the next couple weeks. Car insurance is a real burden, believe me.

Next mission is to participate in a "Trader Vic's" party, tomorrow evening. Music, umbrella shaded cocktails, ugly printed shirts? What I do just to get by... Someone has to, right?

Here is a photo I lifted from the local "Social Register" for last years event:

We will do a bit of boating in June, not sure where. It won't be far from home because the heat here in Florida will beat a person into submission after the third week of said month. It's ok, I have some stuff coming up for the first two weeks of July which will keep me out of circulation and I need to be prepared physically and mentally for the challenge.

That means no barley pops or vine ripened juices. We can wait for August, can't we? Hmmm?

Update; She Who Will Be Obeyed told me that I sounded melodramatic about July's events... No, not that big of a deal. Just getting rid of the glasses (Not Lasik) and I am a weenie about anything (like dentists!) that happens medically to include fillings and root canals. Or vision repairs...
Posted by Barco Sin Vela II at 6:35 AM 1 comment:

Perfect weekend in Northeast Florida... Temps were low eighties and the humidity was almost nonexistent!

I got underway about an hour and a half late, not bad for me since I get easily distracted. In this case I got 'joined' to a group on Facebook called HSL-84 Thunderbolts. I spent an hour eyeballing the photos and remembering my two years (I wasn't very nice back then) at that particular squadron and that is why I was late. I unjoined myself before anyone notices I was there!

Anyway, I rushed over and loaded the last bags and untied the boat from the dock. I headed North on the river to downtown and enjoyed a very uneventful ride in the bright sunshine. Right up until I was a hundred yards from the Railroad bridge, which closed in front of me. 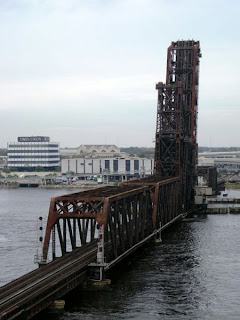 Disappointment. Curse-words uttered to the bridge were not pretty but I was frustrated at the delay.

It was 20 minutes of doing circles in the river until the train had finally cleared which allowed me on my way, pushing the tide at slow speeds.

There is a lot of history with that bridge, the first railway bridge at that site (First bridge crossing the St Johns River!) was built by Henry Flagler's company to bring trains and passengers to St Augustine, which coincidently is my goal, too! This particular span was put in place in 1925 and looks it, believe me.

I passed a sailboat and then was pretty much alone on the River as I headed towards the ocean. The tide changed in my favor about a half hour later, and I now had the pleasure of trucking along at a blistering ten knot pace.

The high speed fun was snuffed out when I got to the Intracoastal Waterway, which has an opposite tide course and I slowed back to seven knots.

About half way down the ICW we got the following tide and sped back to ten knots, but that lasted about an hour. As I approached the St Augustine airport, we were beating back into the tidal current and slowed way down.

The Spousal Unit called me from the A1A Alehouse, wondering when I was going to finally arrive? I reported that it would be another hour or so, and that I was enjoying a very slow pace on the last leg to the Bridge of Lions.

I arrived at about six p.m. and was soon tied to the dock. We commenced the weekend with some Alaskan Salmon and a Simi Chardonnay. While enjoying our evening we were lucky to watch the entire launch and staging to orbit of a NASA satellite in the clear blue evening sky. It was the finest way to wrap up a day on Florida's First Coast.

We were up early on Saturday and enjoyed a fine brekky in the morning sun. As afternoon made it's way to our locality we decided to take the tourist hike about the old town. We were on George Street and ducked into a bar to avoid the Luddite Elitist Marching Mob™ as they protested Capitalism and its ability to feed the masses cheaply. Seems that Monsanto is evil and should be stopped at any cost, despite the fact there are hungry humans in third world nations who would like a chance to be fed by Monsanto. All this is amusing to me as I see well fed, showered and clean wealthy students walk by as they try to make the rest of us change our bad ways.
Youth is wasted on young people...

So I ducked into a bar and had a Belgian Beer.

Afterwards, we left and searched out some more tourist traps for small gew-gaws to place into our plastic bag as we waited for five o'clock and the Tradewind Bar's famous happy hour show, your host Mark Hart.

Got back around eight p.m. and called it an evening an hour later.


Sunday morning had a bit of a gravity storm waiting for me, coffee and brekkies happened a bit after eight. We had a very lazy day watching the Pirate ship take tourists in and out, with a few sword fights on the adjacent dock in between missions. It was relaxing and invigorating to just sit in the shade and watch a busy marina do its holiday routine. We never left the Barco excepting to dump a couple small bags of trash.

A sober Crew hit beddy-byes at nineish to rest up for the trip home.

Up and at-em happened at zero six hundred, I cruised down the dock to use the marina showers while the Spousal Unit used our facilities. The tide was changing and we needed to get away rapidly to take advantage of the favorable currents. The result of which was that we made it home in about seven hours.

And we did get to see some Manatees and dolphins!

Later On: But of course, the Railroad Bridge closed as we were approaching downtown. No curses this time, we had been lucky to have the tides with us and it was a most beautiful day. We'll take the good deals and minimize the small inconveniences that are meaningless in the long run, right? 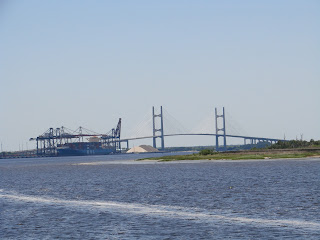 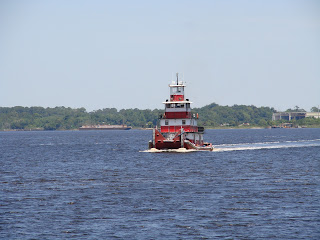 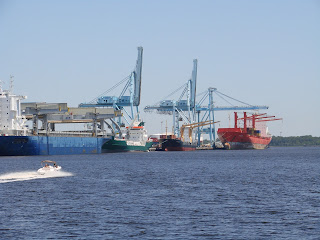 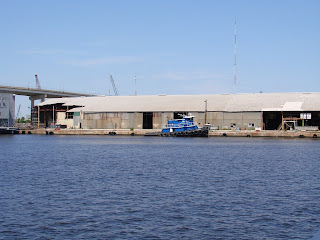 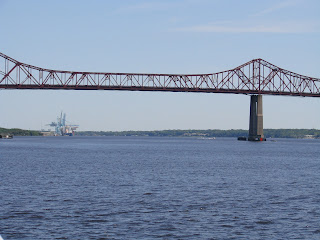 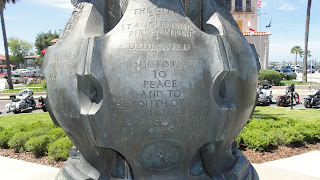 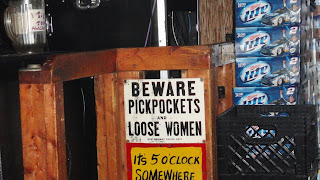 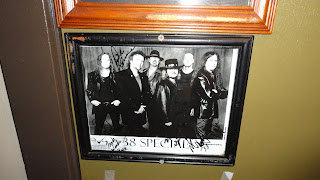 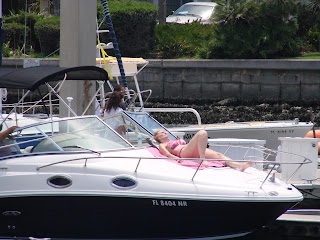 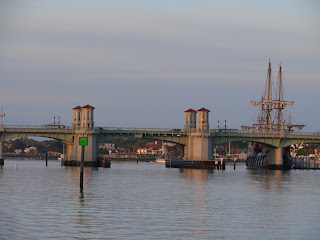 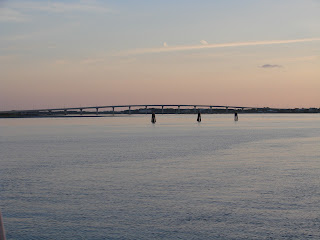 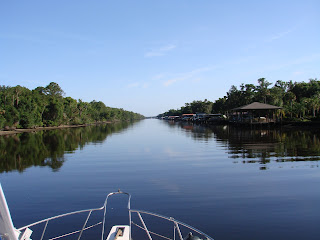 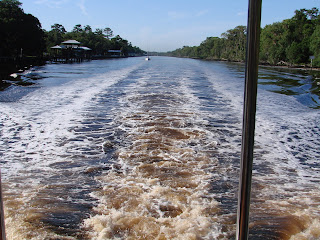 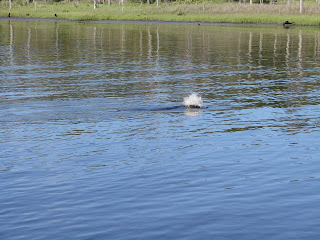