By the Cement Pond...

We celebrated pre-new year's eve/evening by ruining the diet I've been following religiously for the past few weeks. I did this by eating pizza and having some beer in flagrant disregard of Dr Atkin's rules for creative dining. Afterwards, I closed last night's victual debauchery with an evening under the stars, setting by the pool warmed by fire along with my favorite partner in crime!

That tall mug on the little table is mine, filled with a delicious Sierra Nevada Pale Ale poured freshly from the keg. The Spousal Unit is not dieting and does not partake in barley pops, so she prefers grapes that have been smashed and left in a dark place to brood... alone, in a bottle.

Fast forward to now;  Thinking the worst about my recent behavior, I checked my tonnage when I rose this morning and found I lost a pound! She Who Will Be Obeyed also checked hers and reported the same so now we have decided that we should write the definitive diet book called, "The Pizza and Beer Diet; A real world solution to your weight loss angst".

Who's with me on that title? The book will practically write itself!

Someone has to have fun, ok? My recently passed friend, Buck, would be reading this in Portales now (freezing his skinny butt off!) and would comment about this matter and be in full agreement and possibly add some bit of wisdom from his years of having pursued that same objective.

So go out (or stay home), make yourself an enjoyable moment today and I hope all of you who read this remain in good health and cheer.

Next year is gonna be the best!

The morning fog was lifting so I decided to bring the Barco to Lamb's and get a diesel fill up. Fuel was down to $3.15, so I thought I would get a couple hundred gallons.

Untied the Barco and everything looked clear so I was underway, solo. 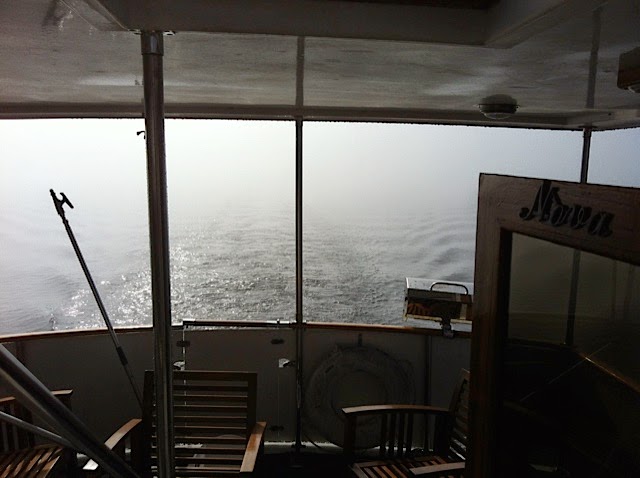 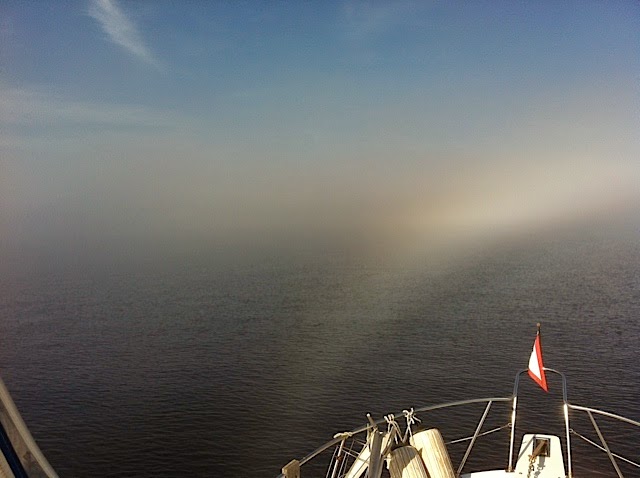 I left the Yacht Club and entered some thick fog. I sounded my horn which was a surprise to the anchored fishing boat I passed in the soup.

Slowed the boat to idle and continued North at five knots, doing a prolonged blast on the horn to alert anyone nearby. I did hear some small outboard motors, but never saw them. They heard me, though.

After about fifteen minutes I made a turn to the southwest to enter the Ortega River. I did not see the bridge until I was about a hundred yards away, and  the fog completely lifted as I passed under the bridge. A few moments later I was pumping fuel at Lamb's and was lightened in the wallet by about $802 bucks. It was a great ride back.

Barco is now ready with about 400 miles worth of fuel, let's go boating!

Beautiful Floriday, outside. Went for a lunch trip to St Augustine and enjoyed a fine Greek meal at the restaurant next door to the Catholic Church.

This is a photo of an Australian Pie Shop which is next door to the Greek joint. 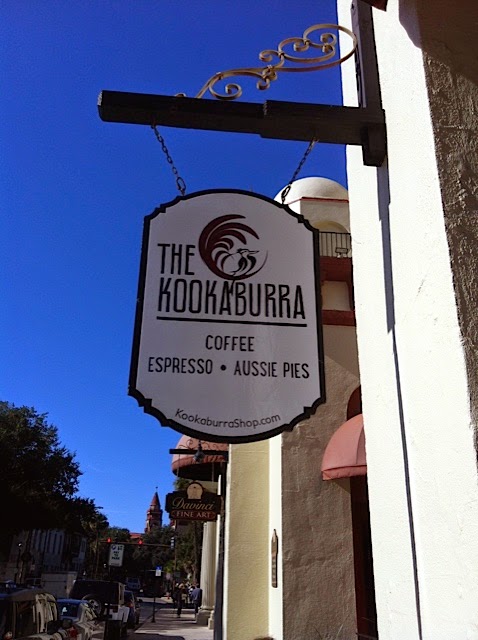 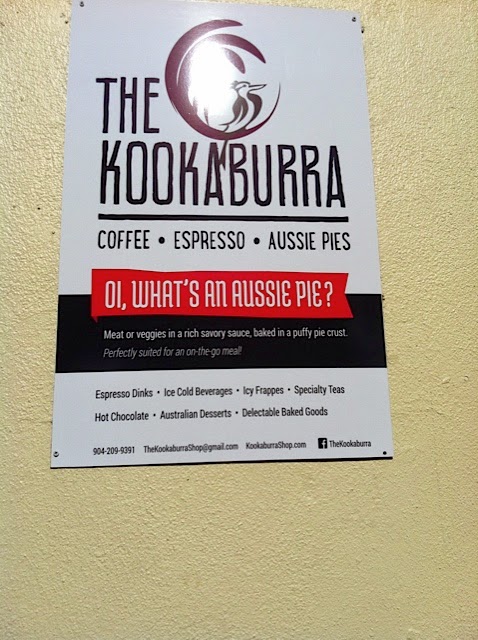 Aussies LOOOVE their pie shops. I've never understood the whole thing about pies, but I don't care for pasties, either. Meat pies are not my idea of food.

Check out the blue sky! So after lunch we drove North on State Road A1A to U.S. 90, made a left and headed home. Nice little road trip along the beach.

Have a great weekend!
Posted by Barco Sin Vela II at 11:51 AM No comments:

Christmas Eve. (Not the blonde woman in Walnut Creek)

Much action in the Barco house; cakes, banana breads, fancy foods and a dinner engagement will fill our 24 hour period!

This photo depicts a part of Beveridge Reef, one of my favorite places on our wonderful planet. At the very minute the picture was taken... This was back in August of 2010 aboard a CSY 44 called Beaujolais...  I was facing Mike, skipper of Callisto (Who took the shot while perched atop his mast). To give you some perspective, I was on the bigger boat on the right and seated in the cockpit under the green awning. This all happened in Beveridge Reef, an atoll about five days to the west of the Cook Islands. We anchored there for four days until our beer and wine ran out. As usual, click to embiggen. 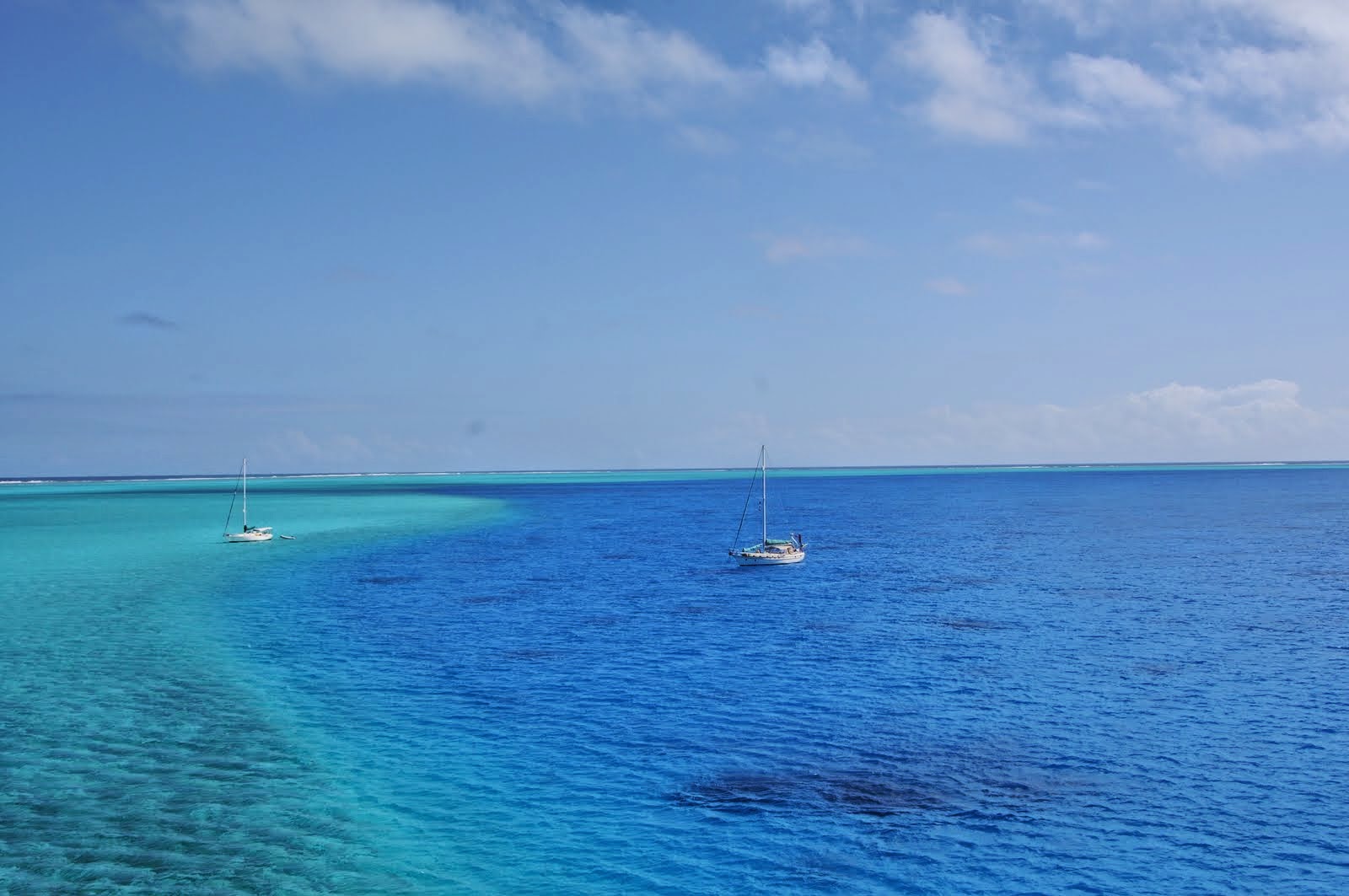 There were three boats in the whole reef and we were literally in the middle of nowhere, anchored in 40 feet of water protected by a coral reef, barely. We all had a wonderful time spending an evening on each boat sharing spirits and potent potables.

I'm posting this because it is cloudy and miserable outside, and I'd rather be there enjoying warm breezes from the east and the bright sunshine that the tropics endure daily. Besides, isn't nice to go back to our happier times?

Someone might recommend we start a Kickstart campaign to get this ship afloat? I need about $900K and we can be there in six months. Arrrgghhh!

The winter solstice is a time to review how lucky we are to have our loved ones close by us and to remember those who cannot be by the hearth and heart. Give a thought to those in the sandbox who would rather be home rather than fighting barbarians who would destroy our way of life.

We at the Barco Sin Vela are hoping you all have a healthy and happy Christmas and Boxing Day.

Back again, for the heck of it.

Nothing really to note, the weather is as rotten as Florida weather can be, about 62 degrees and rainy. Good thing I don't really care about shopping, because i don't even want to go out.

'Ceptin' to cook the chicken on the grill. It is roasting as we sit here and write/read.

The next Barco trip is planned for the weekend of the 17th, in which we will plod on down to St Augustine for an RO3N. I expect to make up for all the beer I haven't been drinking this past three weeks.

The only thing I have accomplished recently was an electrical course that was provided by the good folks at the U.S. Power Squadron. Did you know that I am an Advanced Pilot in said Power Squadron, too?

Soooo, I begin the next phase, known as the Junior Navigator?! course on the 20th of January. They will take three months to teach us how to use the Sun with our sextant to do a Noon sight. If I'm good, they will let me take the next course. (I did all this stuff 16 years ago and we did it in one course instead of two) Power Squadron does things differently. And if I want to take the course I have to do things slowly and in the manner of that fine organization.

Dislikin' rules. That. Would. Be. Me!

After the trip in January, there is the hope of going South again for a Keys run. This can happen if I can gather a small crew to come along on that fantastic voyage, maybe looking at two or three weeks underway. March, sometime. All depends on crew. Shows how much I am caring about the upcoming course.

The chicken came out perfect. She Who Will Be Obeyed, Mao and I enjoyed a very moist and justly roasted bird. I chased mine down with water, just like the cat since we are on the Wagon, lately.

It's nice to go to bed and wake up feeling the exact same way... Tired.

Still got the 'Exile in Portales' on my mind. Gonna be a long time wrapping my head around the fact that Buck is gone. I'm not moping around, just noting the void in the web-o-sphere.

Carry on out there, hoping every one stays safe and dry!

I know it's been a while, again.

Much has been happening here at home and abroad, at least personally. My close Blog friend Buck took a trip elsewhere and will not be coming back.

I guess we all have to face that final day, he knew it most and mentioned it a few weeks back in a semi-serious manner. I suppose we all get the word of finality, sometimes we accept it and acknowledge that message, sometimes we don't.

Buck Pennington was an Air Force retiree living out his days in Portales,  New Mexico and he ironically called it an exile's existence. His blog covered many subjects, most of them fascinating and easy to read. His favorite stuff to chat about were his two sons (Active Duty in the Navy and Air Force), Buck living the good life, cigars, booze and finally, the Red Wings. Here is the title of his blog


EXILE IN PORTALES
IF A LIFETIME CAN BE LIKENED TO A DAY, THEN THIS IS HAPPY HOUR!

As for me? We are doing exceedingly well. The kegerator is full of premium beer, the wine locker is abundantly stocked and I have my favorite person hanging around with me, helping me serve the cats.

Buck always expressed his envy for all the blessings I enjoy in the present, and that he was vicariously living through my not-so-humble stories. He always commented on my posts and was ready with encouragement for me to continue with this blog. Buck would be the first to comment on this posting and probably say something like, "Welcome back, I hope to see more postings!... or "Suck it up, bovine excrement happens...!"

I hope he has found exactly what he hoped to find in the end.

I know Buck was Air Force, but that seemed appropriate.


P.S. Maybe I will have more to say in the near future. Happy Christmas and holiday season, to all my reader(s)!