I will be leaving this morning (in six minutes) to go to my version of work. No, really.

First up; Go to the Barco, untie and head over to Sadler Point for fuel and to have the bottom wiped of slime and barnacles. Fuel will be pricey, looking at about three hundred gallons of carbon gushing number two diesel for our hungry Perkins motors.

I will be lying low starting next week. My right eye will get fixed up followed by the left seven days later. This means for the two weeks I will have the old timer goggles on which will make me look... special. But the net result will be 20/20 distant vision and only light weight reading glasses instead of the windshields I currently enjoy.

Way too much fun, right?

The word for the day is, "Hobart".

Yes. I will be there in seven weeks.

But first, work. I will try to get word back on this site later on.

Have a great Friday!

Just got back home, the rain is starting and I made good on all the day's tasks. Diesel prices are much lower, $3.69 a gallon vice over $4.00 last time. We needed new zincs to be installed so the haulout cost a hundred bucks. Not bad, everything is back in readiness and prices were less than expected. So much for my pay this evening, it all goes to the boat.

I had a leisurely ride back to our home berth, the winds picked up from the west while I made the turn into Pirate's Cove so it was a bit sporty pulling into the berth by myself. There were some minor adjustments to be made to the air conditioning system (I bled air out of the cooling water lines) in the hot engine compartment and I was glad to be successful in that endeavor, too. So we have coolness onboard the Barco and I still beat the weather home.

I read about that sailboat missing in the Tasman Sea. They had left New Zealand for Newcastle, Australia. I sailed to Newcastle a couple years ago and can say that the last night out there was extremely bumpy and I was a bit worried. Hoping those folks turn up safely.

Have a nice weekend!

Slim Whitman, a local resident (Middleburg) and well known yodeler has passed on to the Summer-fields, yesterday.

In the London Daily Mail, he was quoted as saying his singing career which was well chronicled in late night commercials, ..."Helped pay for the fuel in his boat".

I always thought of Slim as a pretty cool singer who was not in any regular rotation on Country-Western radio, who had built quite the career in the 50's and repackaged it in the 70's and 80's on late night tv. In the past ten years, I have noticed his large Huckins cruiser, aptly named "Slim", on the river and near downtown Jacksonville. During the 2005 Superbowl, we were waiting for a bridge opening next to "Slim". I called on the VHF and asked the skipper if he (Slim) was onboard, and received an affirmative. We made sure to wave vigorously at Slim and his party, with great smiles to greet them. They seemed nice and waved back, acknowledging their public.

Slim Whitman is/was regarded well in the Jacksonville area, where we seem to have more than our share of locally based musical talent. Billy Powell's house is about three hundred steps from my home. (He passed away in Orange Park but his Confederate Point house is still in his name)  I think the musical talent of NE Florida residents must come from the water here, or at least be inspired by life in some of the great neighborhoods here in Duval County. Whatever, it's all nice here.

Slim Whitman made it to 90 years, which sounds like a good run especially if you happen to be a sort of celebrity. Celebrities seem to habitually drop into an early grave, don't they?

Stuff be pilin' up and I am a disorganized, grabasstic, lazy puke. And that's just my good side!

Took the Barco to the Six Mile Creek, again. It was perfectly warm and relatively dry weather so why not spend a hundred bucks of diesel to eat some less than palatable food. I really like the Crab Shack because of their wonderful dock which is free for those boaters who dine in the restaurant. Problem is that the food is either really good, or not. It depends on luck and possibly the angle of the moon/sun interface of that particular moment in time. Or just whether the cooks give a particular darn about your food order, I don't know. The server gave me a blank stare when I described the wretched condition of our meal. They don't care and on that evening, neither did I. It ain't worth the effort to educate the staff, they aren't going anywhere and the job they hold is the best one they can hope for, barring a lucky marriage or winning the lottery.

I attribute my charitable feelings to the pitcher of Stella Artois Beer which cost me $7.00.

Even though I am whining about the miserable food, I still return to the Outback Crab Shack in St Augustine because I have faith that the food will be good next time. Plus I make sure to avail ourselves to the wonderful dock on Six Mile Creek which is always fun.

A few photos of the trip down. One notable view is of the Space Shuttle liquid fuel tank that is at the old Green Cove Springs Navy Base. 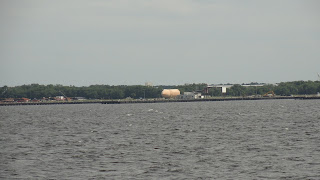 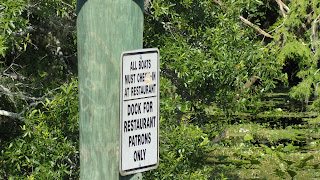 Good time was had despite my dinner experience. It will be better in a couple months.

On Monday, I was tasked by a nice lady in Gloucester, England to drive to Port Orange and inspect a motorcycle. They were doing the purchase via Ebay and they wanted to get eyes on the bike to make sure everything was as it was described.

A mere hour and a half trip in the family truckster and I was there. 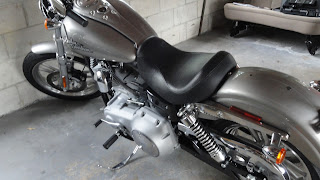 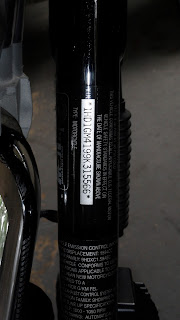 Really nice 2009 Harley Dyna-Whatever. 1971 miles on the counter and the bike is in brand new condition. $8500 for the deal which I find to be incredibly reasonable and I passed the news on to the buyers back in the UK. The motor isn't even broken in!

Lots to do this week. Hope everyone is happy out there, keep on keepin' on!

Survived the first named store.(STORM!!!) So what's next?

The first sorta storm went by practically unnoticed yesterday, but the hullabaloo from the news stations wouldmake you  think we needed an ark to get by! Not.

Just a bit of rain was all it was. In fact, the rain and winds are stronger today from the normal afternoon thunderstorm which gives a more thorough drenching and keeps our lawns and gardens watered. The weather news is just a diversion to keep us from noticing any more scandals coming from the cess pit known as Washington, D.C.

The Mom J. Cat had a yellow light bothering her on her car's dashboard, yesterday. So I spent a couple hours meditating on an uncomfortable chair at the local car repair place while they replaced a couple sensors and helped me lose a bit of weight off of my rear quarter. Now the car is UP and can perform its tasks without annoying lights and buzzers to dazzle the driver.

If your car makes any annoying sounds, just turn the round dial immediately to the right of the steering wheel to the clockwise and the annoying sounds will go away. I promise.

No plans for the weekend have been made. I think it's supposed to be rainy but that's normal weather in Summertime Florida, always subject to change. At least it's a bit cooler after the rains, so no big. In other news, I visited the Barco a few moments ago and turned the cooling dials to the "operate" position and checked the fuel levels. We have about 150 gallons of diesel in the tanks, enough for fifteen hours of unfettered freedom on our waterways. One never knows... I have a feeling we will visit the club tonight and habitate onboard after the dining rituals.

Keep up the fine morale out there, it only gets better, right?!

Enjoy your weekend, everybody!!!