Well, Buckaroos... Greetings, again.
Captain Big-shot  here reporting almost live about the expedition to the center of F-L-A in the sultry heat of the Sunshine State onboard our favorite river conveyance, Barco Sin Vela.

There was really nothing planned, nor intended about this entire 32 hour quest, we have been neglecting the ole girl for way too long and felt we needed to knock some cobwebs off and move some petroleum through the twin Perkins engines. See, we have only taken the Barco out  on the water, maybe five or six times since November 2016. Criminal negligence, if you ask me...

Anyway, Friday we came up with the idea of heading Southward to Hontoon Island State Park. This little trip used to take over fifteen hours from our previous home in Jax but now it would only cost about seven hours on the St Johns. We be figgerin' to crooz sutherly until da dinneh be ready, right? Ok, the weather looked pretty good and what the heck, let's go!

Literally, we threw two small bags together and hopped on the boat and left. Just a case of bottled water a bag of cherries and some potato chips for sustenance and our exposed skin sprayed with sunscreen to protect us from the blazing sun... We were off.

First thing I noticed was how dirty the Barco had become in our three month absence. I felt a bit guilty about that and what was I gonna do about it? We could either be cleaning the boat before we left-- or just get to some boatin' and ignore the glares of our fellow river travelers. (I did get to cleaning the plastic windows of the flybridge enclosure for safety) Oh, I also sprayed the Sundeck sink area with bleach cleaner, so we had that going for us, which is nice.

We passed the Seven Sisters islands and found ourselves whizzing by Welaka at a scorching 8 knots which was quite satisfying to the Barco Crew. We celebrated by cracking into the many plastic water bottles which were there for our refreshment. The time to Lake George was about three long hours and we were relieved to see a very placid lake under the growing cloud masses.

The Lake Crossing took about an hour and we were able to cut in between two large thunderstorms with nary a drop landing in our faces. This was a good thing because storms can really ruin your day, as you all know, so it felt a real victory to miss the heavy winds, waves and rain. Another pleasing thing is that thunderstorms are a form of real air-conditiong which improves the livability of a Florida Summer day to almost comfortable. Ok, it was pretty nice, too...

We got through the Astor No-Wake Zone and and were well along our way to Lake Dexter and the rest of the smaller St Johns River which rolls through the Ocala National Forest. The only other boaters present were biker gangs of Jet Skis whizzing by us and jumping our wake. The Police were a very visible presence, too. Every corner we turned we would see a Police Boat lurking around and ensuring the good behavior of all vessels traveling the River. I don't know why they (Polizei) were out in force, perhaps there was some Jet Ski Club event that they were monitoring. There were hundreds of those almost annoying buzzing-boats heading towards Sanford. 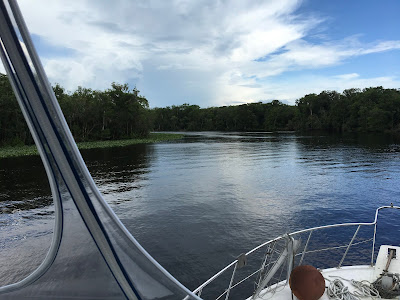 The weather cleared up and we arrived at Lake Beresford just in time for 4:20 celebrations, we hopped into the rain locker, cleaned up and shifted uniforms to glad rags so that we were presentable for a dinner with the local Yacht Club Commodore.


The Yacht Club feted us with the finest Filet and Lamb Chops, Andretti Cabernet and various other potent potables over the course of the evening. Taps was held at 2200...

0730 we were up with coffee and the Sun preparing to get underway at 0745, we slipped our lines and  headed back North...

Beautiful clear skies and a river free of Jet Skis... Of course, this couldn't last all day.

The trip North was uneventful until we made it about three miles from home. S-e-r-i-o-u-s thunderstorms closed in on us and we zipped the flybridge enclosure and tried not to touch any metal objects for fear of lightning zapping us. Visibility dropped to virtually nothing as we were completely drenched in a rain that was enveloping us in a wet and noisy roar combined with the high winds associated quality thunderstorms. It was a couple of sporty hours from Buffalo Bluff to downtown Palatka and the rain reduced to "annoying sprinkle" when we arrived at our home berth. We tied the Barco up, removed the empty water bottles and other trash and departed to the Barco Landing. Mission Complete, 14 hours were spent in transit both ways and it was indeed, a lovely cruise.


After getting our gear off the boat we headed home to clean up and go back out for dinner. About an hour and a half later we were greeted with very clear skies, cool weather and a swarm of dragonflies! The dragonflies eat mosquitoes and gnats so I think the stormy weather brought out predators and prey. Victory goes to the dragonflies, I didn't see any biting bugs...

...In a while, crocodiles. Barco Out.