The escape from the J.O.B. happened at the crack of four o'clock, I shot out the door and strapped myself into the 560SL and launched with a destination of homeplate.

Got home about ten minutes later and began preparations for the usual dining fare; Ribeye steak (medium rare) and a bottle of our finest Cab.

The plan was to do some errands on Saturday and Sunday, prepping our home for the rush of guests that will come at the end of the month.

After dinner we relaxed with the tv and retired for the night at 9:00PM.

Up and at'em  came early Saturday, I worked out in the gym and did a walk around the neighborhood in 34 degree cold, marveling at how winter had returned. But no worries, we had bright sunshine and the hope of temps rising to 75 degrees for the afternoon.

We went to the store got some photos printed and were done with errands by 10:00AM, so the Spousal Unit called for a road trip.

Her Uncle was in St Augustine visiting for the month. Why don't we cruise the family truckster down for the afternoon?

We were off like a shot heading down I-95 doing the speed of heat. No real goal or destination, just get to the Oldest City and make it up from there.

We were in the downtown by 11:45 and searching for a parking spot. It seems there was some festival  going on so all the lots were F.U.L.L., we drove in  circle for an hour but were unable to find even a pay lot. Finally, we drove towards the Fort and pulled in to a tour lot. It cost us $43.00 to park, we had to pay for a trolley tour that is good for three days, just so we could get the "free" parking. Oh well. Her Uncle only comes down once a year, we can give them the tickets so they can trolley about for the next three days on us.

We met up with Uncle and his wife at the festival. Seems they already had the trolley tickets, too. They rode the trolley from their resort to downtown.

We cruised around the Lions Club fair, ate crappy fried seafood and enjoyed a couple beers, all for a good cause. It was one of those Artsy Fair things, so we walked about and oogled the stuff that was for sale, wasting an afternoon.

After the festival, we walked over to George Street in the old town center with a goal of finding the oldest Tavern for Sangria and Beer. 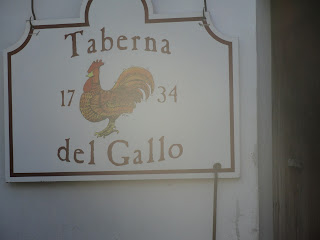 One of the really nice things about St Augustine is that history is all around and most of it is free of charge. The Taberna Del Gallo is one of those freebies that is quite satisfying. The Staff wear period outfits and pour Spanish wines and run the place as it has been for 350 years. They had Samuel Adams Cherry on tap.

We took our drinks out back and enjoyed the warm afternoon surrounded by Coquina walls of the original city. There was musket and cannon fire to punctuate the quiet as salutes were set off. 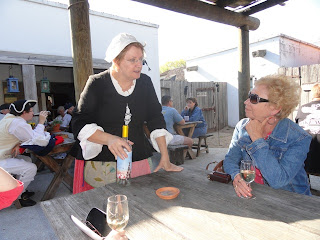 The bartender came out to get her bottle back from us, we complimented her on how nice the Tavern was kept. She explained that she is a History Professor over at Flagler College and that this was a part time job with the State. It seems the State of Florida owns and operates the Tavern.

We got a brief history lesson as we sipped our drinks. 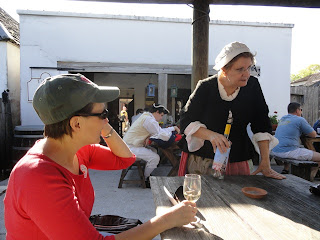 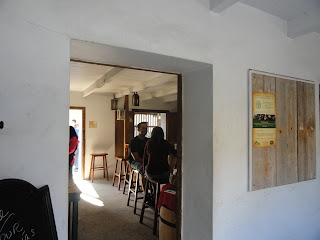 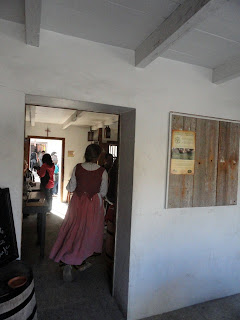 Soon it was past 4:00 and we needed to send the Uncle and his wife to their bus ride to the resort.

We went in search of lodging, because I had enjoyed four beers over the course of the afternoon, I was not going to get a DUI for driving home. We stopped at the Best Western; No Vacancy. In fact the Clerk said it was unlikely we would get a room anywhere near downtown because of Bike Week and other events going on locally. 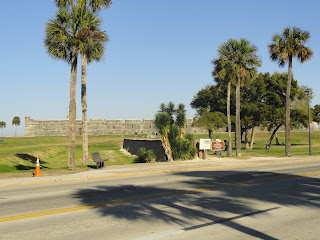 "You're only staying one night, right?"

I replied, "Yes. Especially at those prices."

I justified the expense by thinking of the costs of a possible DUI. A couple hundred bucks is nothing compared to loss of life, injuries and even worse; Loss of License and Insurance!

We were assigned to the Secret Garden portion of the Casablanca Inn. It was somewhere out back and they gave me a map.

The suite was incredible! Old wooden floors, beautiful Persian carpet and best of all, tucked away in a garden courtyard. 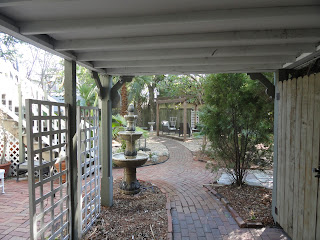 Since we had no luggage, we ran out the door and headed for the Tradewinds Lounge for some music and fun. 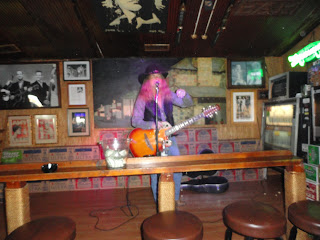 We were spotted and recognized immediately by our old friend, Mark Hart.

Ten years ago, we arrived in St Augustine onboard the Wildebeest III, after completing our Trans-Atlantic trip. Then as now, Mark Hart was doing the one man show.

We have hired Mark two or three times over the years, and he is always quite the gem as a performer.

After his show, we chatted a bit and promised to make plans to have him work another of our parties.

The next stop was my American Legion Post, right next door.

I have maintained my membership of Post 37 since 1994, but nobody knows us. That wasn't going to stop us, we were on a roll!

We hung out for another hour, or so and the low food level light came on. We headed over to a Greek restaurant for Gyro Platters.

After stuffing ourselves, we took the doggy bag and headed back to the Casablanca Inn. I gave a homeless guy our leftovers. I hope he enjoyed it as much as we did!

Stopped by the Martini Bar at the Casablanca and we split a bottle of Champagne and called it a night. 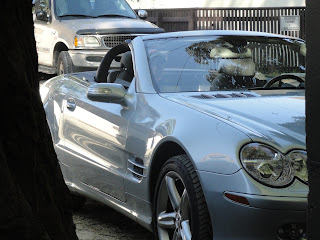 Sunday morning came, and we went to Anastasia Island for brunch at the Beachcomber bar.

We had a nice lunch at the beachcomber eatery and then bid a good bye to the Family and had the
top down, took the long way home through the North Florida forested state highways.

It seems the State of Florida owns and operates the Tavern.

That's the sort o' socialism I can get behind. But I'm thinkin' those period outfits prolly get REALLY warm by the end o' the day.

Ya did the right thing by stayin' the night, no matter the cost. Nice weekend!

You are right, better to repent of overpending than having to really be sorry. And it was fun!