We departed the hotel and headed in a Northerly direction looking to find our way to Patriot Point and maybe a Fort Sumter Tour. With the top down, of course.
Got over the bridge and pulled into a  Visitor Center and waited our turn to ask the pertinent questions like where, how, how much, etc. After waiting 15 minutes for the family in front of us, we decided to wing it on our own.
Headed down the road about a quarter mile and we came up to the USS Yorktown/USS Clamagore Exhibit.
Active Duty in uniform get in free. Us retiree's get the two dollar discount and as you can see below; Recognition. Military
Woo-hoo! I'm almost somebody!
﻿

Really nicely done Museum. We had a nice time. Spousal Unit was feeling her ankles, so I went aboard the Submarine alone. I have a few photos to upload in a bit.
Cruising around the Yorktown was like any other Carrier, except not as crowded. I recommend anyone on the West Coast visit the USS Hornet, which is permanently moored at the Carrier Pier at the former Naval Air Station Alameda (My old base!). There is cooler weather and it's in Alameda.
Not that Charleston is so bad, quite the opposite; Charleston is nice.
Anyhoo, we traipsed around the hangar deck and admired the A-1 Spad, Hellcat, Corsair and more than a few other historic aircraft that are in wonderful condition. We did hike up the ladder to the Flight Deck and wandered around the modern aircraft; Phantom (Done in Marine colors on one side Navy on the other), SH-3 Sea King (An old airframe I spent five years working/flying in), S-2 "Stoof with the Roof" early AWACS, F-14 Tomcat (in work paint job), S-3 Viking, EA-3 Skywarrior, F-18 Hornet and maybe something I'm not remembering. I do have photo's coming up when I get home...
Another of the attractions was a flight simulator that charged about  $5.00. I didn't bother, let the chirren have their fun.
She Who Will Be Obeyed was having some ankle issues, so we cut the visit a bit short. We wandered off the ship and I wandered aboard the USS Clamagore (Old Diesel Boat built in 1945). I think the Sub was a real treat, it was pretty much left in the same condition as when it was decommissioned in 1975. There were some ships binders which still had the dates done up with "FY 1973 OPTAR" "FY-1975 Personal Gained/Lost/TAD" and so forth.
There was a moment in the galley, I was letting some youngsters get past me when an older Dude, wearing a USMC hat asked me, "Could you ever serve on this?"
"Nope. Too small." I replied. "I was on Tin Cans..." "The Submarine Sailors of WWII lost over 25% of their personnel, gotta hand it to them for being able to live and fight in such tight, nasty conditions."
That was the end of our discussion. Amazing stuff. The width of the boat at it's widest (inside) is about 16 feet.
Barco Sin Vela is 13 feet wide.
After leaving the Submarine, we wandered back to the HAL-3 and Vietnam Navy experience. While walking to the grassy area, we were treated to the sight of one of the employees plowing head first with a golf cart into the Vietnam fence.
Walked around the con-ex boxes and huts and came up to a beautifully preserved HAL-3 Sea Wolves UH-1.
There was a plaque with the names of the KIA members of HAL-3. I told the Spouse about the many members of HAL-3 who remained in the Navy later on and that I flew and served with many of those folks between 1980 and 1988. Particularly, there was one fellow by the name of CDR Quick, whom I flew with during my WESTPAC cruise of 1983. CDR Quick would tell stories about Muc Wa and flying with the Sea Wolves in the Southern portion of South Vietnam. (I could mention more names but that would just be name dropping...) I will mention a notable enlisted fella; "Gunny Guthauser". That Dude had 72 air medals. We young enlisted Aircrew folks had mucho respect for Chief Guthauser.
Sorry for digressing onto my own weak memories...
Anyway, walking around the Vietnam exhibit in 100 degree heat with the sun beating on us kinda gave a bit of taste of what those good folks were going through (Minus the mortars and being shot at) for their 13 month tours.
We stopped over at the Ships store and bought a hat for the Spouse and went our way in peace.
The Roadster turned right on Highway 17 and we headed to where the road would take us. This time we were aimed at Sullivan's Island. The homes looked like high cost beach houses, we headed towards the water to see what was interesting.
We came up on a Historic sign; Apparently, Sullivan's Island was the main shipping receiving port for humans being dragged from Africa to their new homes on Plantations in the South.
Oh, that sort of port. Not a nice history, is it?
Well, we went over to the National Park Fort Moultrie. Paid our $5.00 and wandered into the fort.
This was a nice place to be. It was one of the Forts that fired on Fort Sumter (About a mile away), it was $5.00 and we could wander without children being underfoot!
Fort Moultrie was active from the early 19th century through the end of World War II.
After tiring ourselves on the berms and walls of the Fort, we hopped back into the Roadster for the trip to the North Charleston Embassy Suites which was right next to the Performing Arts Center, where the concert was due to begin at 1930. We arrived and checked into our very nice Suite on the second floor, had some snackage in the courtyard and retired to relax in our nice room(s).
PHOTO DUMP!
﻿
﻿ 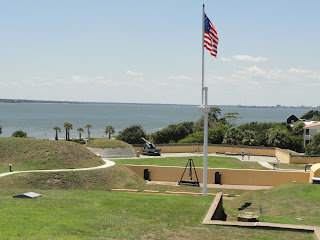 We left for the Concert about a half hour before it started, our hotel was in front of the Performing Arts Center, about a 150 yard walk.

The Concert was better than I can describe! Elvis Costello is a Master Showman who worked really hard to make the audience be involved with the show. There was a twenty foot spinning wheel with songtitles, Elvis would invite a couple of people to spin the wheel; If they drew a joker, the Request Light would flash and the spinner could make a request for any song they liked.

After the song choice was made, the spinner would be invited to have a seat at the "Society Bar" and have a glass of wine while the Star sang the song choice.

Ah, not so fast... While the song would play, a Lady came out behind the stage who would ask the Fan's to step into a Go-Go Cage where they would have to look silly dancing to the song(s). In the case of one of the spinners, they were up there for a four song stretch.

Great fun! Here is a review of the concert.

There is another Concert Scheduled for Jacksonville in September. If we aren't traveling, we may go again.

Have a great weekend! 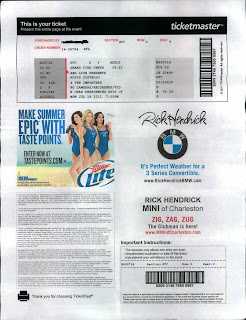 One of the Big Names™ of Naval Aviation

One of the great names in American history, actually. Perot didn't do the admiral any favors back in '92.

GREAT pics! I liked the link to Patriot's Point, too.

If you're still in Charleston I can recommend Melvin's BBQ (locations in Mt. Pleasant and Folly Beach Road), and a trip out to Wadmalaw Island to visit the Firefly Vodka distillery is a lot of fun. They specialize in Sweet Tea Vodka and a dozen other varieties of vodka, bourbon and rum. Don't miss the straw market in downtown Charleston and the Saturday morning market at Marion Square (fresh Beignets available!)

Bob, you are the Master Gourmand. I wish we knew about the beignets... but we ate mostly at the Charlston Place. We are home now, we meandered back to Jax via Hwy 17. Thanks for coming back by!

Buck; You are correct about VADM Stockdale. One of the American Greats, period. "Fighter Pilot Philosopher", too. Have a nice weekend!