Back to our sorta epic voyage;

We had a nice northerly breeze pushing us along at about five knots, the seas were manageable. A helmsman must pay close attention to the passage throught the water, you can be going West on a heading of 270 degrees magnetic, but your passage over the ground could be more like 200 degrees and even though you are looking at unobstructed water in front of you, your boat may be about to hit land on your left!

So this meant hourly positions being marked on the paper chart, each little circle having time, course and speed listed next to the mark. Just in case we lost GPS, we could quickly come up with an estimated position and never be more than a mile or two off.

That rocky coast of Brittany be not your friend, especially at night.

The ferries were zooming in and out of Roscoff, heading to and from the UK. There is nothing like a little action to keep one awake and on the toes avoiding the hazards of being an unseen 43 foot dot with ferry's the size of city buildings approaching, moving at 25 knots. Awake I was!

Finally, the sun began to rise and we were approaching the channel between Ushant and Brittany

A black sailboat was passing us about a half mile away, to the North. Why, we know those guys from St Katharines Dock! It was a sailboat from New Zealand, and they spotted us, too!

We got a VHF call, and they passed on the weather situation and told us we should continue our trip and bypass Brest and make for LaCoruna, Spain. The weather was to be smooth for the next four days making a crossing of the Bay of Biscay a safe and easy passage. "Go, while you have the chance!"

Back in the day, cellphones did not reach the shore. The weather is NOT broadcast on VHF in Europe, like it is here in America. Oh no. The British (Who are not open to change and improvement) still broadcast the "Shipping Forecast" on LW radio. Just what is LW? It is between AM and FM, and you must have a special receiver (Which I did NOT) and tune your radio in at some weird time, like 1212, 1812, 0012, 0612.

I am wrong. I just went to the BBC weather site and here is a quote;

If you miss the forecast especially about your area? Hard Cheese. None for you, and all that.

At those time indicated, every seafaring Englishman has a pencil and pad, and they will transcribe the forecast in their best shorthand. No repeats! Better get it copied right the first time, dirtbag.

The weather is forecasted according to areas, each has a unique name like "Tyne", "Dogger", "Trafalgar", etc. Here is a diagram of the areas: 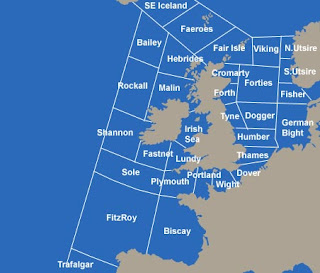 Evidently, the BBC has caught up with the times and they publish the forecast online.
Awfully nice of them, right? At least today's Mariners can get all the info with no mistakes via computer. Here is a quote for today's weather;

And now the Shipping Forecast issued by the Met Office, on behalf of the Maritime and Coastguard Agency, at 1130 on Thursday 08 October 2009.

The area forecasts for the next 24 hours:

To a European, it all makes sense. To an American who wants it all, now!, not so much.

Sooooo, we get the word to continue our passage to Spain. Only we planned for Brest, and our scheduled crewman, Chris, was supposed to meet us there for the Biscay crossing. Chris was paying for a ferry trip to join us and it would not be nice if we left him standing in the Port with no idea where we were.

We made the turn to the South and we noticed that we had caught the current flowing towards the Rade de Brest. Hauling the mail, it seemed, we were doing about nine knots over the ground. Whooo hooo, this was fun!

About five miles from the entrance to the Bay, we noticed other boats passing us to the West, heading North. They were waving and trying to get our attention.

"oh, look. How friendly, they are waving to the American boat!" I cheerfully said.

"I wonder what they are trying to say?" the Spousal Unit asked rhetorically.

Just then, our speed dropped to about two knots. The tide had literally switched as we pondered what the situation was.

And we could not turn to the South East without being pushed quickly towards the rocky shore.

We raised up the main and tightened the jib and increased the throttle to the max speed of 2800 RPM, tacked quickly to the West. This made us go on a course of 300 degrees, away from our destination.

There was much head scratching and quiet cursing, we had planned to be at the Rade de Brest for the tide to be flowing IN. That was apparent to us, problem was that there was an offshoot of the tide that was flowing to the NORTH, and into our face!

We headed out to sea, planning our next tack which should bring us further South.

We made the tack and tried to head 150 degrees. We just could not make any Southerly progress, and there was a huge set of rocks blocking the entrance to the Bay.

Frustrating. Now we knew what the people were trying to communicate to us. They were teling us we should have began our approach further out to sea, and not hugging the coastline.

We tried three times to make the course and get to the right of the rocks. No joy.

This was now into the third hour of this and we were both getting fatigued. We tightened the sails on the final tack and ran the motor up to 3000 RPM and went INSIDE the rock, with as much angle as possible, in case there were any shallows.

Slowly we made it to the rocks, slid inside and made it without touching bottom. Too cool, and saved again!

As we passed the rocks the current grabbed us and we flushed into the Rade de Brest like a toilet. 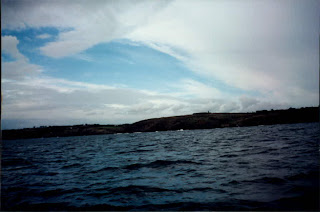 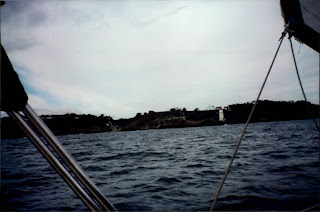 It was about fifteen miles to go, the breezes were right and it was a grand sail. Should have taken us three hours to make the port, but it only took an hour. Hauling the mail, I say!

Once there, I called the port and they directed us inside the visitor dock. We tied up and made the mile and a half walk to check in to the Marina.

They had gone home.

So we walked back to the Beest, gathered up our shower equipment, found a sympathetic Anglais speaker who gave us the lock code to the Showers, and we even brought some Franc coins (Because the French don't believe in "free" showers) so we hoped for hot showers and a warm dinner to help bring us down from the adrenaline rush.

We went into the gender specific bathrooms, found the shower. I hopped inside, took off my clothes and glasses, tried to put the five franc coin into the meter box for the water.

It only took tokens. To keep the thieves at bay.

Put back on the clothes and met the Spousal Unit outside. She had the same experience as me. She was so angry, she began to just cry out of frustration. I do not handle tears very well, I would rather a hot poker stuck in my eye than have She Who Will Be Obeyed cry about anything.

We hobbled our way back to the Wildebeest (Her ankles were giving out and she was in arthritic pain), I pulled the stored gear from our bathtub and filled it with hot water and suds. Our hot water heater only held five gallons, so I had to heat up water with the stove, filled the tub up to chest high, got her a glass of white wine and left her to soak the frustration away.

I made Shipwreck casserole:

I took a shower and off to bed. Chris will be here in a day or two.

We were docked on the end, on the long dock to the right.

There will be fun and disappointment coming right up. Also, more photos. 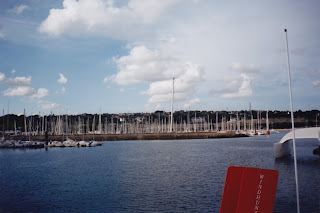 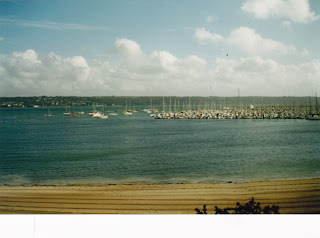 UPDATE: Big hello to Denise, Janice and their Mom. Welcome aboard the Barco Sin Vela! We sail oceans AND rivers around here. Be sure to comment anytime. 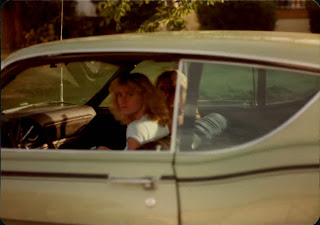 In my 1968 Ford Torino Fastback

UPDATE 2: I found a site that explains more fully, the evolution of the UK Met office weather reports on the BBC. I did not realize the popularity of the four weather broadcasts a day on the LW Radio, and how people who didn't have a maritime reason still enjoyed the broadcasts! Read the link if you are interested, or don't. I'm just makin' the info available.
Posted by Barco Sin Vela II at 5:27 AM

I do not handle tears very well...

Nor I... which seems to be a common failing with our gender. I would do just about ANYTHING to avoid tears from any/every woman I've been close to. It just freaks me right out.

You seemed to have God on your side in the first stages of this adventure...

Thanks, Buck!
Please don't misunderstand my last tale; We were in no real danger, at all. It was just looking like we would have spent a few more hours bucking a tide had we missed the flood into the Rade De Brest. As for that rock, it was about a quarter mile offshore, the charts kinda indicated deep water, but nothing definitive. I saw other boats transiting that passage, and I stared at that situation for a good twenty minutes. If we "touched" for just a fraction of a second, I would have spun the boat and reversed course.