Cherbourg and the departure to Guernsey

We tied up at the Port De Pleasance marina and checked in. Brought our entire bag o' identification papers, passports, receipt of check out from last port of call, ownership papers for Wildebeest III. The Marina staff spoke Anglais, so we were in.

This tall ship was parked across from us, I would say the scenery was pretty cool, nautical and all that. 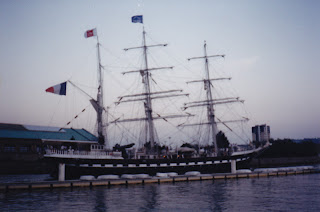 That afternoon, we walked around town getting a feel for the local stores, restaurants and most importantly; The Bars. Back to the boat for an early evening, we slept like logs until sunrise. Had our coffee and pastries, feeling quite satisfied with ourselves.

About 0900, there was some motion on the water. A motor boat was pulling a line of "Optimist Prams", which is a small sailing dinghy used to teach children how to sail. These kids were about six years old. We thought they looked like little ducklings following the mother duck. But make no mistake; these kids knew how to sail. We considered American Helicopter Mom's, and how there was no freakin' way an American kid would be allowed to sail a small boat without the obligatory team of Lawyers following each boat.

What a great way to learn about self reliance and problem solving. 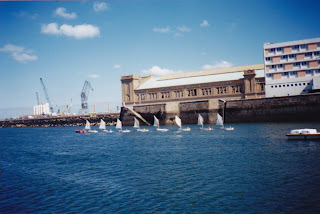 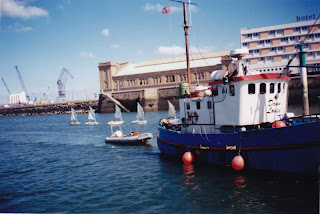 There was a little excitement that afternoon, I heard a call for help outside and found a sailboat trying to dock in the one vacant spot behind us.

It was a Beneteau 36, and the motor had apparently crapped out on approach, so they were trying to sail up. Good luck with that, the wind was howling in from the North and the boat wouldn't stop. I motioned and yelled for the skipper to drop the headsail as I tried to keep them from ramming us. The Beneteau stopped, but was starting to turn from the wind blowing the hull. Other boaters from the dock came to our aid and grabbed lines and pulled the sailboat safely to its dock with no further damage. The Skipper invited us aboard for beers and wine to thank us.

Turns out that this type of boat had a fuel tank pick up that would not allow the motor to pump fuel if the boat was at any angle. Pain in the butt!

The next morning, we were underway again, for St Peterport in Guernsey. As we approached the Alderney Race, the winds were out of the East and the water was still flowing from the West, so we had about eighteen foot waves which were sharp and steep. For about and hour we bucked into this mess, with water breaking on the pointy end of the Wildebeest. At about twenty minutes from the Race itself, the tide shifted and the seas began to calm, we motorsailed around the corner and began heading South in very smooth seas. The air temperature was about 75 degrees and the winds were about twelve from the East. Glorious weather! 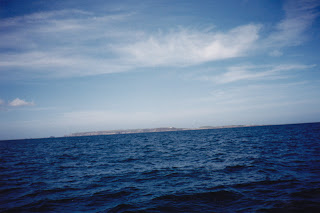 Soon, we could see Guernsey, and also the other channel islands. We were definitely enjoying this beautiful day on the water.

We began making preparations for entering St Peterport, we had out charts and guide books ready, and we started making our approach. 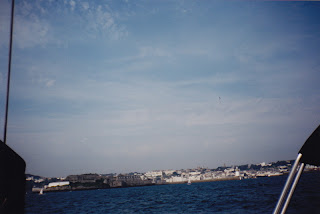 We noticed a catamaran that was behind us, they seemed to be following precisely our course. 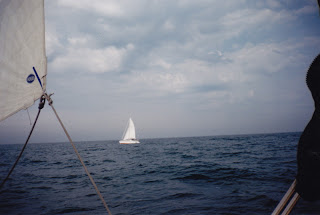 This was an opportunity for fun!

We watched this boat slowly following, and I decided we needed to make a sudden 90 degree turn to the East, as if we were avoiding a rock.

Sure enough, at our point of turn, the catamaran mirrored our course change!

I did it again; Yep. These guys are stupidly following us.

We tied up to a mooring ball and awaited the harbor lock opening. We got inside the port and tied up to the quay. The catamaran pulled up behind us, and I asked innocently, if they had any charts?

"Nope!" "We were hoping someone would know the way in!"

It was four hippy surfer Dudes. They literally had gotten hold of this boat and were supposed to sail to Barcelona, Spain. They hoped to do some surfing and maybe some skiing when the winter came. Their only navigation tool was a GPS and an Esso Road Map.

I made the skipper walk with me to the Chandlery, and we bought him a "Reed's" Cruising Guide for Western Europe, and instructed him to buy charts.

We really got to liking these young men, they only wanted the chance for fun and adventure, and just wanted to get out there to get it done. They were also very polite and could put away any excess beer that we happened to have.

Locally, we got to know a St Peterport Lifeboat skipper who was so happy to meet us that he took it upon himself to show us the Peterport Pubs. He was involved with a sailing charity and he hoped we could make a sizable donation to youth sailing. I had to explain that we were quite poor, the boat may look "wealthy", but the crew ain't.

I changed out the fuel filters and did minor maintenance, then we spent an afternoon setting up way points for our next destination, Brest France.

We left with the tide on the third morning, ready to another overnight cruise. The weather was incredibly good, and we headed Southwest with our Catamaran buddies astern, following us.

About an hour and a half out, we got a radio call from the Catamaran, they were heading back to St Peterport for some malfunction. We never saw them again. 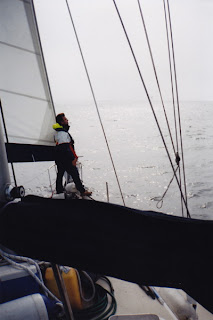 We noticed dolphins following us. The were Siamese Dolphins! Take a look at the coloring, and tell me they are not Siamese! 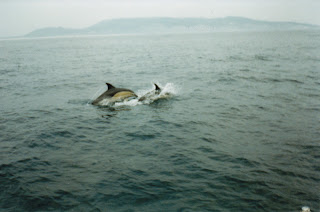 We took this as a good omen, because we really liked our Siamese Kitties who were safe in California.

We continued our sail through the night. Again, there was fatigue, but all systems were running reliably, and we were able to handle the boat safely. This cruising business was starting to shape up. But a trip to Brest was not just a little jaunt. It was the longest journey ever attempted by the Wildebeest and her crew. We would have to enter unprotected Atlantic waters and go into a Bay.

Their only navigation tool was a GPS and an Esso Road Map.

Which is probably the way I would approach sailing, which is also why I DON'T. Good on ya for showing them the proper way!

I'm lovin' being along for the ride, Darryl.

Thanks, Buck. We could have used some more crew, if only for the conversation.

I definitely want to be you when I grow up.

On New Years Day 2009 we went to Monterey Bay (CA) and went whale watching. We were blesed BIG TIME and saw a pod of like 100 dolphin in the morning sun. Majestic is what it was!

Do you say Brest or Breast, France???!!! Got my attention...sorry...I must have some sailor blood in me.

LL; Thanks. I have yet to grow up, in the vein of that old Buffet tune, "I'm growing older, not up".

JG; Brest; It's not just an awesome name: It's a lifestyle! The Beer is pretty good, too.

The dolphins seemed to find us from France to St Augustine. They would jump behind us to get our attention and then commence with playing. Some of these mammals would be with us for days, and they provided some great moments.