Off to Figueira da Foz

We had about 65 miles to cover so we were underway just before sunup. The ocean was incredibly calm, but after the butt whippings we had enjoyed in the past couple weeks, we were very reserved. I had the main and head sail up and motorsailed with the trusty Perkins 4-108 chugging along. We were doing a respectable six knots and were surprised to find ourselves entering the little bay while the sun was high in the sky.

Dolphins were our escort the entire trip and it was truly nice out. The breeze was warm and the sun bright and we were almost lulled into complacency, but not this time!

I did a security check several times and found that water was entering the boat (Still!) and this time, I could see it seeping in around the rudder post.

Interesting. Berthon Boatyard had replaced the rudder gland packing, and they did not tighten the assembly back. Incredibly lucky that we did not lose the rudder during the violent ocean motion we had in the Bay of Biscay. Easy enough repair, all I had to do was tighten the five inch nut. Should be simple, right?

I did not have a pipe wrench capable of turning this nut.

So now I spent my time agonizing about the water entry and closely monitoring the bilge pump's operation and the levels of water.

This is just another example of having a boat yard do work and kicking us out without doing a proper shake down cruise with the list of repairs. Just to see what is broken or unrepaired.

We arrived at about 1600, and we slid into the little marina at closing time. Our friends the "Vikings" spotted us and with loud whoops of welcome, they guided us into an available berth and grabbed our lines. Totally cool arrival!

I stole these pictures from 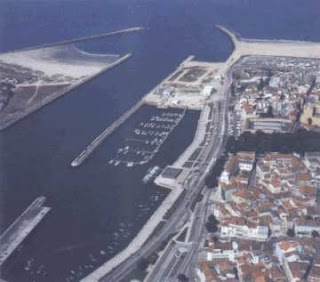 
Over sunset cocktails we swapped yarns of our journey since Brest. The Vikings had an engine failure about twenty miles out of the harbor and used their ten foot dinghy with a 7.5 HP outboard to tow their boat in for the last ten miles. Once in port, the lad's turned to and did a rebuild of their diesel in the ten days that they had been in Figuiera Da Foz.

Awesome! I sure wish I had a crew like this to do our voyage... can you imagine? They rebuilt their diesel in ten days!!!

All I can think of is my lack of talent and the wasted years of not being a mechanic. Oh well.

I asked if they had the appropriate wrench?

They were getting underway the next morning and, "No, we don't have the right wrench."

Like anything I do, it has to be a full production. The next morning I began my search of every hardware store in the town. Nobody had the pipe wrench I needed, and it was the next day when I found a plumbing supply store. Sixty dollars later I had my wrench and I hustled back to the boat.

I got to the rudder post and in eight or nine turns, had tightened the rudder gland.

We went to the internet cafe and checked out the weather situation; The weather forecast was not good for the next few days so we settled into a routine of waiting, dining out and enjoying the local atmosphere.

The weather forecast five days later was for the remnant of hurricane Irene to make landfall in our vicinity, so we had to batten down the hatches and secure the boat for a blow.

The marina operators came out and had all of us cruising sailboats rearrange our berths and we all met at 0900 to move about fifteen boats to more secure docks. I was glad to see a virtual NATO of cruisers all pitch in a hand so that the moves were made in an efficiently quick and safe manner. We put four line handlers on each boat with three or four line handlers at the dock to catch lines. This meant that the skipper could fire up his motor, move and be tied up in about ten minutes vice the inevitable banging around that a non-assisted boat would endure.

Like NATO, the only boat who refused assistance of any kind was a French owned Super Maramou 53', he didn't want any of us coming near his boat. Just like NATO.

Capitaine French dude did not trust the English, Americans, Danes and Finns anywhere near his bateau.

We stood by to assist anyway when he started beating his stern into two Portugese sailboats. His was the only damaged boat along with a couple broken outboards and rudders.

The rest of the time was spent enjoying the company of our polyglot fellow mariners, and we enjoyed the rains and winds down below emptying our wine lockers and beer cellars. I also broke out the video and television so we could catch up on the box of video tapes my Mom had recorded for our trip.

So every day, we would venture out to check the weather on the internet and close the evening with dinner and dessert of local Ports.

For three weeks this went on, finally the weather forecasts began to be more favorable for a two day journey to Portimao. We were bypassing Lisbon because of the delays, and we needed to make way towards Rota, Spain. Asap.

In retrospect; Figuiera da Foz was one of the best ports we visited. The cost was about ten U.S. bucks a night, and the fellowship with the other boaters was phenomenal. One such new friend was a young man tending his 36 foot Cat Boat. He greeted us in unaccented American English, and we struck up a conversation, especially because his boat had a Portuguese flag.

As we chatted, we asked where they had lived.

"Oh a small town in Northeast Florida, you wouldn't know it."

"We lived at Jax Beach."

I went on and mentioned I lived there while stationed at Mayport. What an incredibly shrinking world, we are in Central Portugal and meet Jax Beach locals.

The only uncomfortable thing we had to bear was learning about some of the local dinner choices. Dining could be exciting due to language restrictions, for example; on the Spousal Unit's birthday, we went to a nice restaurant with the specific idea of ordering steak. I was afraid that I would make a mistake and order say, "Shoe covered in Cheese", or some other ghastly gastronomic ghoulie.

The highest price steak on the menu was "Steak Especial". It may have been spelled Steack Espeziale, or some variation of that theme

Oh boy, this should be good...

Imagine our surprise and disappointment when a small sirloin comes out covered with a fried egg and a dark brown gravy covering the egg and steak?

So we scraped off the offending eggs and choke down our dinner. Another family comes in and they are from a Danish boat on our dock. They mention that they are looking forward to a steak, and I warn them about the "Especial" part. So they order the steak sans "Especial" and they get a beautiful sirloin unfettered by gravies or sunny side up eggs.

I get a surly look from the waiter for scraping off good food. No matter, off to the Casino to see our favorite Maitre D, who invites us to his bar (He was the owner of another place up the street) where we get a private tasting of his best Ports.

The three weeks was a bit frustrating, since we wanted to be in warmer weather but again, one has to take the good deals where you can make them.
Posted by Barco Sin Vela II at 8:07 AM

...one has to take the good deals where you can make them.

Yup - flexibility is the key to successful wandering, on land or sea!