Ok. Maybe South-westerly; But it was in the proper direction towards the Caribbean.

The Spanish Main. El Caribe. "Florida juts like a guiding thumb, to the islands of Rhumba and Rum..." etc.

The first afternoon at sea was a little bit bumpy, the seas were building with the winds which were from the East. There was some frustration still, with the self steering inoperative and the point punctuated by the useless hydraulic piston binding our helm.

Night came the usual time, about when the sun went down, and we divided into two watches of two. The waves made the boat bounce about and I wanted to make sure that the helmsman would be able to manage sail adjustments and any other emergent actions without having to leave the wheel. Plus, nothing like having someone there to give moral support when things look darkest.

"What's the real reason you needed two in the cockpit at all times?"

Me: "Well, I don't feel comfortable leaving the Spousal Unit at the helm alone, without me being there to take care of heavy work... Plus, I knew the "Boys" needed to have someone there for assistance."

The reality was that when it was my watch, it literally was MY watch. I would let the Spousal Unit take the wheel for short periods, but the rocking and rolling were very difficult for her ankles. For Richard and Chris? They did a half hour apiece with the resting hand taking a snooze in between tricks on the wheel.

The next morning was a bit over cast with gusty winds. The seas were a gray color with little white caps, but otherwise steady. We were settling in and we breakfasted on Hoo Hash and toast with coffee chaser. Nothing notable other than seeing a few commercial ships heading to the East into the Med.

Afternoon was approaching and the seas became more gentle with the winds dropping to eight knots. Very comfortable, main and head sail doing the beam reach thing. This was actually enjoyable!

Night time we were becoming a little weary, sleep being less than four hours between watches. I was becoming snippy ijn my dealings with everyone on the boat.

Third day was a sunshiny day, winds continued to be light and variable. During the my middle of the night turn we were approached by a commercial vessel, who did not seem to respond ot our navigations lights. SO I fired up a search light into the Pilot House. Quickly, the vessel turned slightly and passed us by. I think they were a-snooze at the wheel and our radio calls and light rustled them awake.

We continued on our course to the Canary Islands, and really weren't sure which we would go to. We figured on Gran Canaria, due to the main population center being there (Las Palmas) and the fact that Jimmy Cornell's "Atlantic Rally for Cruisers" begins there for the massive annual sailboat rally from the Canaries to St Lucia.

(Of course, the Wildebeest III missed the ARC departure window due to reasons alluded to earlier...)

The fourth morning was pretty bumpy, with winds building and us reefing our sails.

I took over the morning watch and really had to wrestle the helm to keep us on course.

That usually means that loss of helm control has occured, a MAJOR MALFUNCTION!

My favorite word came flowing forth like a river. Each sentence began with a F and usually ended with a ing or something like that. I passed the useless helm to Chris and ran below to see if we could salvage steering, otherwise I would have to set up the emergency tiller, big "if" we still had a rudder.

I was even more afraid at that moment, then all of Biscay Bay because there is no rescue off of Africa.

Ripping the mattress and bedding off of our berth, I jumped in to the steering quadrant with both feet.

Wait. What is this hydraulic piston assembly flailing about the rudder compartment?

I grabbed some cable ties and strapped the device clear of the rudder control assembly and asked for a steering check.

The wheel was now free of the terrible binding that the Windhunter piston had placed on the helm and it was actually easy to make adjustments to our course.

Good thing, the seas got even more bouncy with 15 to 20 knots of winds. But still we continued the mission. we were making good time now, about 5.5 knots and we could actually see the volcanic mountains on our RADAR, and we passed to the west of Lanzarote and Fuerteventura Islands. The day was getting better, the end was literally in sight! The Spouse and I were on pins and needles, trying to will the boat to go faster. 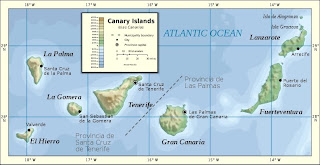 I forgot to mention that this day was my birthday, not that I celebrate this kind of nonsense, especially at sea. But what a great present to be within thirty miles of our goal and have had no malfunctions or troubles. (Forget the trivial loss of the steering system; We were going to get all that replaced in Las Palmas, right?)

It was now approaching midnight and the bay was in front of us. Normally, a sailboat should stand off shore and approach a new harbor in the morning with the sun behind us.

F*&^ that! I had channel fever, baby! I wanted ashore a.s.a.p. We had good charts, a GPS and functioning RADAR, right?

We merely had to find the breakwater, go to the East of it and head towards the channel lights that lead you to a small protected marina, surrounded by a inner breakwater.

I had the RADAR going and we all argued as to where the navigation lights were and their physical location in front. We began heading towards a brightly flashing red light only to find that it was a traffic signal on flash. Bad head work...

Finally, we found the small entrance and made a left turn to the Texaco fuel dock and it was 0230 in the morning for the logbook landing time.

My birthday present. I was touched, thinking of all the abuse I heaped on the crew and they still gave me a present. 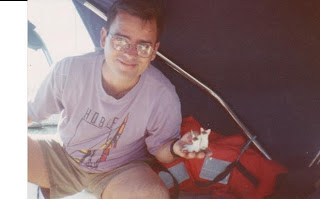 We tied up snugly to the fuel dock and settled in for a quick beer and a nap. At 0630 the Texaco people came on and yelled at me for being at the dock. We quickly took on thirty gallons of fuel and moved off the dock. We were signaled into a berth across the way, so we secured the boat and checked in properly with the authorities and and harbor. 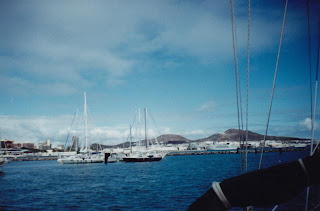 Afterwards, it was showers and Liberty Call for the crew, who vanished into the city.

The Spousal Unit and myself checked out the suitability of the Marina Watering Hole and befriended "Mohammed", our bartender host. 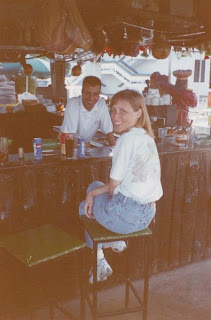 Crossed the street to check out the down town, we hoped to find the hardware stores and supermarkets. 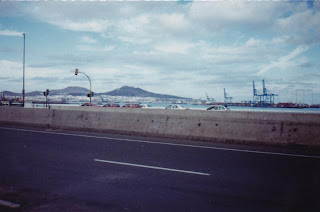 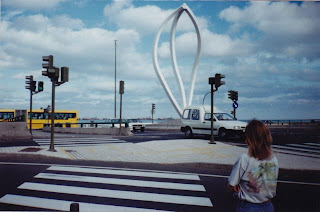 The phone calls back to London with Windhunter were as fruitless as ever, they had lied about shipping our replacement gear for the self steering. I threatened to tell the entire boating world about the uselessness of their product and after sales service. They threatened to sue us for slander.

Lucky thing we were feeling a bit more confident about not having self steering or as we call it now, "Otto-Helm", since we were well and truly screwed for that particular year. If we happened to have another ten grand, we could have had a proper Ray Marine Auto Helm 6000 or 7000, but we had no more money to spend on repairs or upgrades.

We made some small repairs and filled the food bins to the max with cabbages, apples, Spanish Tuna in Olive Oil, olives and the like. Departure for our crossing was waiting on a proper weather window; In the mean time we partied and ate well. We even had a "Mexican Dinner Night" in which we enjoyed homemade Fajitas and Margaritas. The bottle of Gran Marnier we bought for the Margaritas is only half empty and rests in our liquor locker at home, today!

After about seven days in port, things were getting a bit expensive. The dockage was about forty bucks a day, food, beverages and stress were all adding to the costs. Finally, we identified the 20th of December for our departure. It was getting very late for a good crossing so we had to take the first good weather window to move.

I called my Mom in California, she sounded a little worried but knew we would be as safe as can be. She said the Mogwai and Jellicle Cat's were missing us and she hoped the sail would be a good one. It was a short good by, and I hung up. It felt like a final farewell, in a way. I hoped there was no foreshadowing going on...

Paid off the Marina and checked out with immigration; Let's get this show on the road!

I had a song in my mind, "Barometer Soup" by Jimmy Buffett.

I just didn't want to do any of that Barrel Rolling thing. I'm serious about the music: It was really in my mind because i had to have something rolling around in my head! Later in the cruise it was mostly Bob Marley, but only after it warmed up.


The thrill and the excitement, and not a little apprehension was stirring our insides. This was going to be a big deal.

Not on topic: I want to slide this tune in just for Caribbean Soul. Jimmy in Anguilla doing one of my favorites from 1988, it got me through my Fast Frigate days on the USS Lang and the USS Gray;

And we remain rapidly reading rapturously!

I can only imagine how pissed you must have been about Otto Helm. That's the kinda stuff that makes people take up midnite firebombing careers.

Hey Buck, Aaarrrgh!
"I can only imagine how pissed you must have been..."
It was the subject du jour over the next 18 months!

There were seven or eight ARC boats who had to hand steer, just like us due to Windhunter. Nigel Calder and Jimmy Cornell (Famous Nautical Writers, one of whom actually contacted me to get my opinion of this fine product!) got involved and the Company soon declared itself insolvent and broke up. The system was a great idea and maybe someone might be able to redo this with newer technology.

They would sue you for slander? BS...like their product, no doubt.

Gene; You are correct, Sir!

At the time just mentioning Windhunter would get me started on a rant. Today? Merely amusing.