After returning to the Basse Terre Marina with newly caught tuna, we tied up, cleaned fish and prepared to head over to our friend's place to cook and eat. It was a brutal evening where we piled on a couple of bottles of Champagne on top of all the beers and wines from the afternoon.

The next day we got back to the business of cruising the shopping centers for food wine and a visit to the local pharmacy for a prescription refill. It seems in other countries, the pharmaceutical industry is not so shrouded in controls and paranoia. We needed some birth control pills since the previous six month supply had run out. The Navy/Air Force hospitals would not let us have more than a six month supply at any time. I'm sure this was for our own good, we might want to sell Ortho Novum 150 on the black market. We really tried to get a year supply, but no.

You might wonder why this is so important, after all, many women go without their daily pill and nothing comes of it.
Not so fast, with us. There are other reasons for having this pill and they aren't all to keep from having children. Oddly enough, this type of pill has other effects that are beneficial and contribute to daily good health. We really needed these pills.

Pierre-Louis takes us to a large pharmacy where they fixed us up with a six month supply with no hassle at all! In fact, a prescription was not needed and the Pharmacist wanted to know if we needed any antibiotics to stock on our boat.

I could really take life on that island!

Funny thing about antibiotics; They are treated with the same security here in America as if they were an addictive pain killer, like oxycontin.

Our country has asshole drug laws. Sorry for the cussing.

Shopping then led to a case of French wine and a case of local beer. We also went down thw wonderful canned food aisles and got a diverse selection of foods like Duck Wings (Canards), Chacroute (Sour Kraut with Roast Pork, Sausages and Ham in a white wine sauce) and a few others. It was a large car load of supplies all at very reasonable prices.

Dinner that evening was at the Marina Restaurant where we started with a Rhum Ponch, and went into entrecote beef.

Just then we noticed a mast and sailboat anchor light indicating a visiting boat had just anchored outside of the marina. Four large, loud Texans came in apparently after a day's run from Dominica. I know they were from Texas because they mentioned it several times to the wait staff.

We cringed over our meals as these louts began berating the waiter for not bringing rum punches. A French Rum Punch is a small whiskey glass, a bowl of ice and a bowl of cut up limes is placed on your table. There is also a small dish of brown demitasse sugar and a bottle of local rum.

You pour a healthy dose of rum in your glass, squeeze in about one lime (be sure to get some pulp in there!) and add a teaspoon of the brown crystallized sugar. Add a little water to keep all this liquid.

Well, these four nice tourists did not get the memo so there was a bit of loud complaining. The staff (Who spoke no Anglais) were pushing back. Finally a manager came up and explained; "Eyooow wanntted the Ponche Planteur.. No?"

Ahhh, Bach. Why didn't they just say so, no?

Every one was happy and the Spouse and I ate faster to get clear of the sociological rubble that the restaurant was now becoming. We wrapped up and using phrase book Francais, we thanked our hosts for a most enjoyable meal and bid them Au Revoir and Adieu.

The Texans took notice of our mangling of the language and we ducked out of the room before we were obliged to speak politely to them. I felt the eye burning on us as we walked the dock to the Wildebeest and I could hear this through the air, "How the hell did they get a berth in the Marina..."

By the way; I like Texas. Great place to be and live. Just that some folks don't feel comfortable in foreign places and act loutishly.

All good things must come to an end, so the Marina management asked us to leave in the next day or so. We did last checks and prepared for our departure. Next stop was definitely not going to be Montserrat or St Kitts and Nevis.

St Croix, United States Virgin Islands! It would be a two day journey, but it would be America, complete with Wally Worlds, Kmart and 110 volt AC power.

We had a sad farewell lunch with Pierre-Louis and filled up with diesel, water and made a last minute stop at the charcuterie for some fine French Sausages. We also bought two cooked chickens for the road. 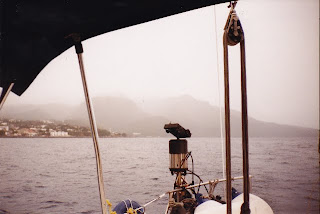 It was a strange almost foggy day as we made our way to the West to clear the island.

While these photos were being taken, I was both driving the boat and tearing into some awesome rotisserie chicken and had very greasy fingers. 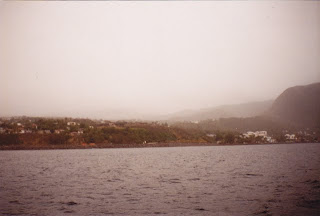 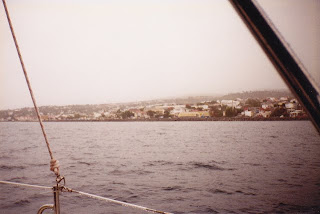 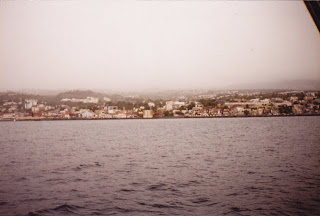 Four hours later the weather cleared and we had fair winds and sunny skies. We were on a heading of about 310 degrees and had a full headsail of wind; After five years we were finally heading to American waters.

It is the time that we celebrate our 19th wedding anniversary. Gosh, time flies way too fast when we are having fun, no?

Here is the guest of honor for tonight's celebratory dinner; 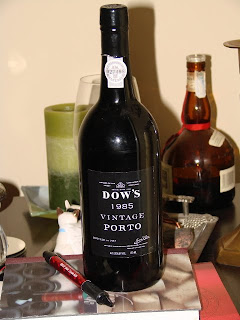 A 1985 Dow's VIntage Port which will be served up as dessert to a fine Chateaubriand that will be personally served to our table by Chef Stephen at the Yacht Club. Last year's celebration dinner was so fine that we decided to repeat the experience.

(I am typing this one handed because Malli is currently in "right shoulder-cat" mode.)

Once again I commend my lovely Lady for enduring the past nineteen years with me. Our life has been such a real joy and my only sorrow is that there may only be another forty to go. No doubt that measure of time will fly as fast as the past two decades have.

I am grateful that I get to enjoy my every day living with the sweetest gal from Kalamazoo.

Happy Anniversary! I know from whence you speak about time flying and all that. FWIW, my anniversary in the way-back was my favorite holiday of the year. Srsly.

Our country has asshole drug laws.

I hear ya about asshat Americans on foreign shores. It ain't limited to Texans, either.

Thanks, Buck. The anniversary dinner is an old fave of both of us.

The Wedding dinner was Papa John's pizza. It was all we could afford. Heh!