Move the boat before the weather comes a howling!

It was the middle of the week and I had watered and took care of our flowers in the back yard. I also put Crisco shortening on the poles holding the flowers and Hummingbird feeders. This keeps the squirrels from climbing up and enjoying the sugar water snack instead of the birds. We couldn't get a photo of the first failed squirrel, but I heard he was licking the white grease off his paws in anger, by the fence.

The Spousal Unit is now back at work in the sunroom office. While on conference calls she has the nice view of the pool and adjacent green areas and the constant company of Siamese cats. I bring her snackage and cool drinks. Her colleagues have no idea. 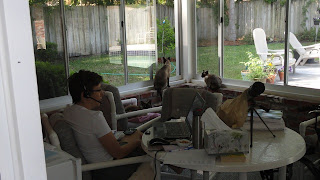 It's a pleasant place to work surrounded by nature outside, open windows and talkative cat friends.

Got the call on Wednesday afternoon saying the Barco was finished and that I could pick the boat up and take it home. I decided to do it on early Thursday since it was supposed to be the calm before the stormy afternoon. 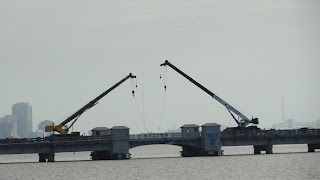 I approached the Ortega River bridge and called on channel 9 asking if the bridge was able to open. I was assured the bridge would open on request. Good thing I called early, this would not be nice if I had to return to Sadler Point. I arrived at the bridge about ten minutes later (I wanted to give them plenty of time to move people around.) Once calling for the lift, I stood off at a safe distance. After waiting for about five minutes, the Union Construction dudes got into the cranes and lifted one side of the bridge. I drank a coke while watching the action on the roadway, as the workers came out as slowly as possible. I can assure those guys that they make a lot more in annual salary than me, but they were thinking (I'm sure) that I was one of them rich-ins' out on a toodle aboard my yatch (sp. int).

Whatever. Just do your job, ok?


I was intentionally not getting upset at the wait. It's a beautiful morning on the river and I get to be on my boat. So as I passed carefully by the bridge, I thanked the nice workers for helping out. And I got the boat lined up on the channel markers, the depth is a bit skinny with silt just outside the bridge.


I had a great hour or two on the boat. I wished I could have had the Spousal Unit with me, and if I did we would have made a longer trip of it. Thursday was supposed to have some exciting weather and indeed it did. Only it was sunshine and gentle breezes vice thunderstorms and rain. Hah!

As I pulled into the berth, an attractive blonde lady handed lines to me and she asked if I needed any help which I graciously declined. You see, I have all the lines set up on the dock, all I have to do is grab them and drop the loop onto the cleats, once I stop the boat.

I did not take a photo of the lady because it would be rude, sorry.

After securing all systems I called Sadler Point and they sent the Service Manager out to give me a lift back to my truck. Great service!

As for this weekend; I have a nice Easter dinner planned for Sunday, but we will be fairly subdued otherwise. We will have Mom and our friend Phil over for big dinner, but other than that we will just have a quiet one. Hope you all do, too.

Break/Break
I spotted this video and enjoyed it, what a great idea! We Americans have been waiting for the flying cars ever since the 60's, and it's about time we get the opportunity to buy one.

Yes, I would like one of the items in the following video. Maybe the second or third year model. (One never wants to fly the "A" model of anything!) After the bugs are worked out of the flying car, perhaps I will be able to afford a used model in the distant future.


One last thing; Yesterday, April 6th was the thirty-third anniversary of my graduation from Recruit Training. Where does the time go?

I hope my fellow recruits are doing well. Even my old friend Wayne Adam Ford. (May he find peace and forgiveness)

The Spousal Unit does indeed have a nice workplace. AND someone to bring her refreshment, AND bodyguards, and Lord knows what else. My workplace was never quite as good.

That young Marine looks pretty spiffy. Has it REALLY been that long ago? ;-)

I can hardly believe the time passage, either. Or the girth growth.