The Yoopers were here when we returned from the Doctor's, around 1015. It was a 24 hour drive for them and they were ready for the pool and Florida sunshine.

After lunching on some Bubba burgers, Steve and I went to move the little boat into the garage to change the wheel bearings. The operation went downhill fast, and we were like two monkeys f%^&ing a football trying to pull the axle apart. Two hours later we left for new hubs and bearings which took three stops before we acquired all the goods.

By five o'clock we were beaten by the axle again, and we set everything down and left the project for some dinner and some revivifying beer.

We will give it another shot later on this morning, but I think we will see about getting some advice from the Boathouse trailer parts place on Blanding Blvd.

It's always something, right? But having the trouble here is better rather than sitting by the side of the interstate with no options and fewer tools. 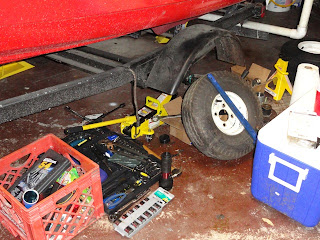 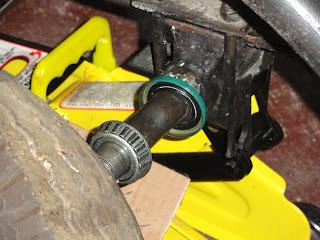 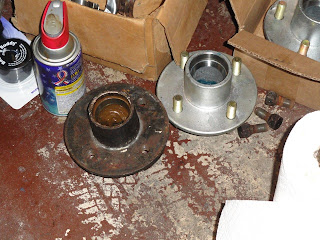 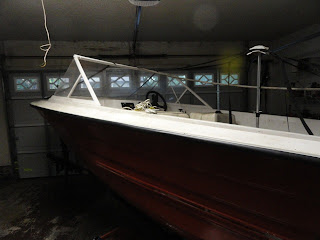 Forward, to victory!
Posted by Barco Sin Vela II at 4:44 AM

But having the trouble here is better rather than sitting by the side of the interstate with no options and fewer tools.

That is God's Own Truth.

The trailer looks like a total mess. Have the guys over at Boathouse told you what the problem is? It seems to me that the spring and axle are both starting to gather rust, which can make the whole thing difficult to pull off. In any case, the spring and the axle should be replaced every 5 years depending on how much you use your boat. So if you use it frequently, you might want to look into replacement.