Sorry for the long break.

Soooo, after the storms finally dried up at the end of June, I began sanding teak rails and preparing to refinish those rails on the Barco. I did not want to be out front of the Yacht Club with ugly bright work. The air temps have been averaging above 98 degrees which is not a good way to introduce brushed on varnish to finish that sanded wood. The varnish will dry too quickly and not be properly absorbed by the wood so a new plan was formulated on the run. I found a product from Flood (CWF/UV) that sealed, waterproofed and protected the wood from the ultraviolet sun rays. Our sailing friend Roger was nice enough to brush on a couple coats while I prepared the onboard machinery for extended running. Man it was hot in that engine compartment!

We loaded up the boat with our luggage and went to dine at the club on Tuesday night. Mom was coming by with her neighbor so there was sure to be a good time. (Three bottles of Pouilly-Fuisse with dinner...!) It was indeed, a long evening. Why not? We were on holiday time, baby!

The Barco had a plentitude of visitors for watching the fireworks that evening. It was great having three families on board with front row/no obstruction views of the fireworks display. The long and hot afternoon took a big toll on me (No, I was not over served with barley-pops!) and I was exhausted by the time the show was over and I was snoozing in the rack by ten o'clock. We were heading out to Fernandina the next morning and I wanted to be ready!

It was a beautiful and clear sunshiny morning when we slid out of our berth at seven o'clock. Off to Fernandina!

Luck was on our side and we found the railroad bridge in the "up" position at downtown, no delays for our transit.

We made it to Fernandina Beach Marine in seven hours, with an escort of dolphins surfing along side for a goodly part of the run. Once at the dock we refueled with 170 gallons of diesel and we were soon tied up for the night. After a nap in the air conditioned sleeping areas, we headed out to find dinner.

Roger was kind enough to treat us to a wonderful dinner at Joe's Bistro. Joe's is a block from the Marina and this was important because someone special to me is still a bit shaky on her ankle and does not have the range to walk long distances. But the food was great and we really enjoyed prompt attentiveness of our server. The Chef even made up a great cheese platter to go with our dessert Port.

We walked back to the boat and found that our dock was a promenade for the dating crowd. We settled back on the Barco and watched the happy couples cruise by. Until the mosquitoes convinced us to retire below in the cool air of the Barco's Salon. I do enjoy trawler living, it's so easy and comfortable!

I was up and untying the Barco before zero seven hundred Friday morning. The tide was gently heading out and we were being pushed from the dock and other boats. So why not leave, right?

First, I had to carry our trash bag to the dumpster. Regular tourist-y types were filtering on to the dock and I politely said "Good Morning" to one gent as I made my way around them. In fact, I noticed that some of those folks were worried that I might be trying to cut my way through their now forming line to the charter fishing boats.

Heh. I brought my own boat to this rodeo!

I walked back to the Barco, took off all but one line, fired up the diesels, climbed off and untied the last line and shoved us off, and I scurried back to the helm and performed a reversed 270 degree turn with our boat, turning the bow to the South a mere 20 yards from the tourist onlookers. I made eye contact with the one fellow I greeted and was most satisfied by the look of envy he glared at me.

"My boat is bigger", I smugly thought. The Spousal Unit wondered why I was laughing while performing the previously described maneuver, and after I explained the situation, the whole of the Barco Crew was feeling the same giddiness as the Skipper.

What a great way to start the trip. Off to St Augustine we were!

It was a long run down the Intracoastal. We made fair time and it took about seven hours from dock to dock. The City Marina is efficient, friendly and expensive. $190.00 for two nights, but the location is worth it. We had our post trip naps, showered and set off for the Tropical Tradewinds bar... Our old friend Mark Hart starts his Happy Hour set at five o'clock, but this time, we won't stay for the whole set. We'll go get dinner afterwards. Yeah, that's the plan!

We walked into the bar and Mark immediately called out my name and greeted us all. Not a good start, this usually leads to too much fun. There was a special guest sharing the happy hour set with Mark by the name of Jim Carrick. Oh, what a great talent... we stayed for All. Of. The. Set.

We had to. When talent is being show cased on a small stage, one feels obligated to at least enjoy it, right? (I did not know that Jim Carrick is all over youtube; Check it out for yourself.)

Jim Carrick was nice enough to briefly chat with us and we had no idea of his history. I really enjoy the great people we always seem to meet at St Augustine. We were sure to buy a couple cd's for later.

The Crew departed and were back aboard the Barco by 9:30 and I was in the snooze mode soon after. We still had Saturday to endure so we needed to be rested up!

Saturday, we had an appointment with a Sailmaker who was going to estimate a job for the Barco; We need a new Flybridge Bimini and enclosure. Lots of blue cloth and plastic windows for to keep the rain off our pretty heads and faces. Pat, from Gioia Sails was early and he was onboard at a little after eight o'clock. Good thing I had a cup of coffee and was relatively clear headed.

After the terms were accepted, Pat took a down payment and was on his way. Roger and Myself took up  a bucket and scrub brushes and washed the muck off the boat. About an hour and a half later we had cleared most of the dirt. It was now super hot and time to get ready to find a dark place to dine on lunch. We accomplished that at the Athena. Great food!

No trip to St Augustine is complete without the walk down George Street. We went direct to the Rooster Bar. Sangria and many games of "Shut The Box" were on tap with the nice Museum bar tenders in period dress who showed us how the patrons of that bar may have entertained themselves back in the early days of St Augustine.

Run on sentences always help carry me away, yes they do!

Anyway, back to the American Legion Post 37 for a couple beers and some bar snacks. Then we returned to watch sunset from the deck of the Barco Sin Vela. Our day was wrapped up with burgers served with champagne, a fine way to end Saturday. It was an early night because we would depart by zero seven hundred, with the outgoing tide.

Not much to report on the Sunday ride home; It was quiet, clear and beautiful out and we were happy to be the only boat on the water until ten o'clock. I made sausage sandwiches and Roger poured the champagne and orange juice (Bucks Fizz) which was a fine way to greet the warm sunshine.

We bucked the tide for a good portion of the day until we reached the St Johns River, and we were swept all the way through downtown and back to our dock at the Florida Yacht Club. Seven hours it took to travel and we tied up at precisely two o'clock, on the dot.

A great week, for sure. That is why I didn't post any blog entries, hope you all accept my excuse! 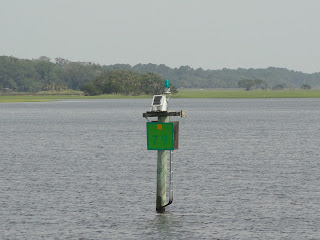 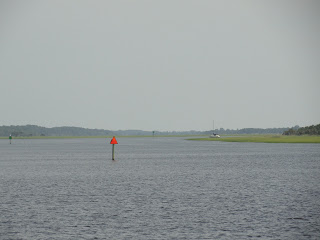 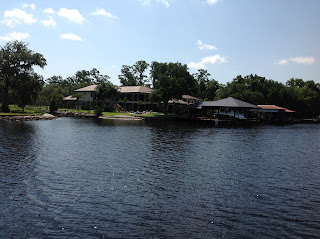 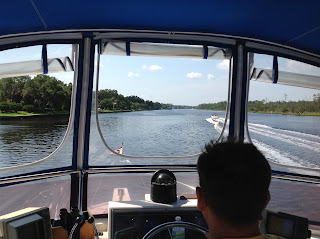 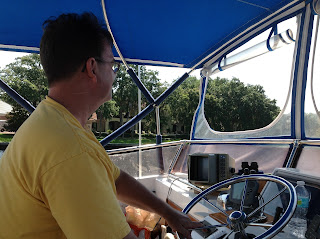 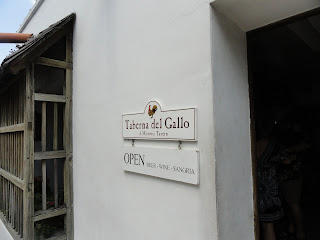 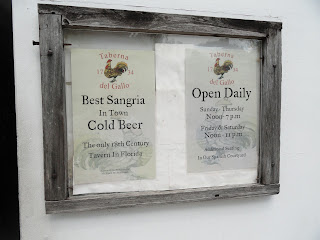 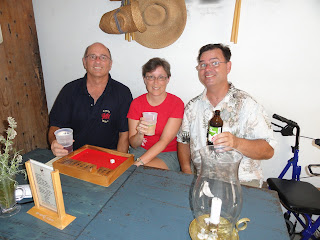 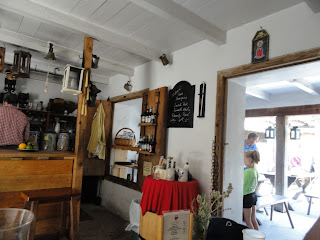 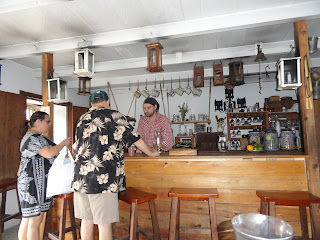 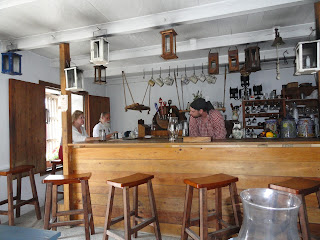 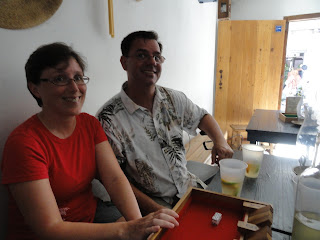 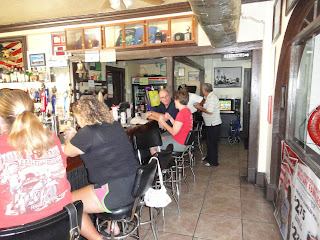 Ernest Borgnine was apparently the real deal as a person, even though he was a well known actor for so many years. What a guy! I hope I can be as spry into my nineties. (Ok, just making it to the nineties with any kind of decent health would work for me!)

I stole a link to this video from a commenter (Usual Suspect61) at Cdr Salamander's site;

You're forgiven for not posting last week and thanks for taking us along on yer cruise.

I see that Carrick guy will be in Jax in September... gonna go?