Nothing of note happened this weekend, we had some heavy rains locally, and stayed home for the most part of the two days off. There was a movie marathon on Saturday evening, thanks to Netflix.

Dined at the Club Friday night, met a nice gent from Northern California through a friend of ours from the base. Our new friend owns a recently acquired Hunter 35.5 (Mutual friend felt we should get together concerning this particular boat). We had a nice time over great food and three bottles of wine and we are now tentatively planning to participate in the Memorial Day Weekend Offshore Race to St Augustine, 25 May 2013. The weather on that weekend tends to the fair side and I think the Hunter 35 helmed by the Barco Crew and the owner would be quite formidable in competition with the local sailing club.

History: We have sailed in the Mayport-St Augustine Race 1993, 1994, and 2002. We meant to do the race in 2003 but our boat was being painted and was unable to compete. Afterwards, we moved the Wildebeest III to Fort Lauderdale for the remainder of the time we owned her and never had the opportunity to race her again.

The St Augustine race is an easy six hours or less on the water and you never really leave sight of land which makes this race good for the inexperienced offshore sailor and yet challenging enough for those who regularly sail long distances. Plus the after race party is usually quite legendary in itself...

Here are some photos I took from the Barco Sin Vela, underway offshore two years ago of the Mayport-St Augustine race which is hosted by the North Florida Cruising Club; 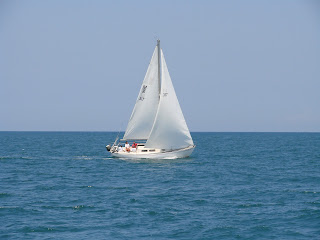 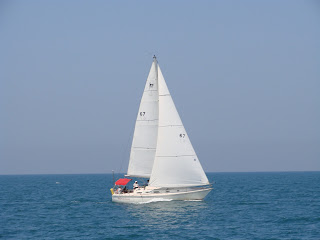 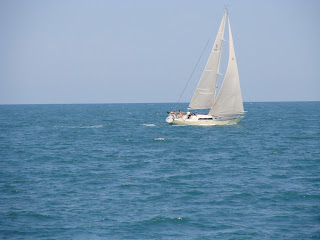 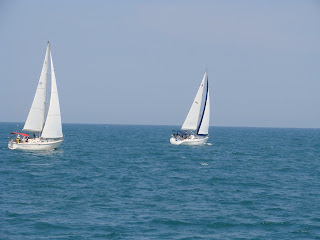 These boats pictured would be the main competition we would face. They are racing there year after year and really know the courses. There is another Hunter 35 in that club which is not pictured, not sure if they were racing in 2011. They are called "Changing Channels". When I last participated in the Mayport-St Augustine Race, (2002) we came in second place to this Changing Channels, and if we could have made it two more miles I think we would have passed them for the win. Today, I would expect that we will be lucky to just place second but there is always a chance we might improve on that last finish, one never knows!

Below is a place listing of the Cruising Class of boats for the 2002 racing season, we came in fifth overall (out of nineteen participants) for the year and our best finish was second at St Augustine. .
Note: 2002 was the last year we raced our Morgan 43.


This means we have been out of competitive sailing (Excepting Fiji racing at the Musket Cove Regatta) for the past three or four years, so it will be interesting to see if we can scoop out a respectable finish with our lack of recent experience.

One of the challenges we face right now is getting our friend's boat ready to compete. "Bubbles" (1990 Hunter 35.5) is currently in a local boatyard receiving repairs and improvements. I need to see if we can schedule a weekend of testing and training for the crew. This could be a good time to dust off the sailing skillz! 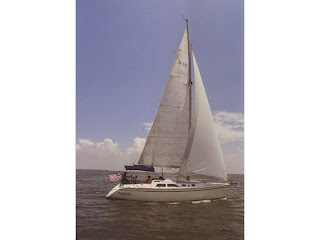 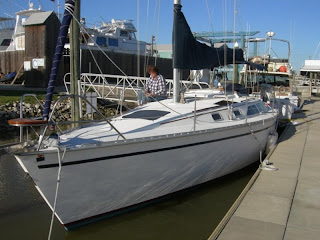 The Barco Crew will be in St Augustine for the race weekend either way. The plan is to bring Barco down on Thursday or Friday and leave her at the docks so that we have a comfortable place to stay. We can catch a ride back up to Jax to actually sail "Bubbles" offshore with the other racers. This all sounds ambitious and all, but darn it, we have to get out and about on the water, right?

Have a nice week!

* Here are a couple views of our "White Lightnin'" on her first outing (A Win!) back in May 2007 in the First Coast Sailing Association's Women's Sailing Series.  SWWBO on the helm: 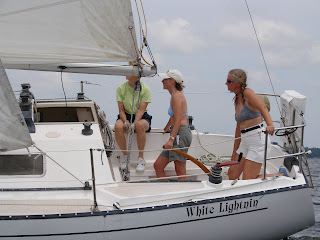 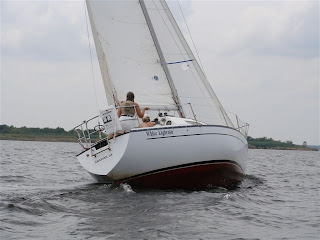 I love boating photos! They bring back such vivid memories.
Posted by Barco Sin Vela II at 6:27 AM

It sounds like Memorial Day will be pretty memorable for all concerned!

Come on out and visit!

I'm tempted... but SN1 arrives home from the desert along about that time.

Bring all your boys!