Or should I title it; My Morning Whine?

Seems I have an appointment this afternoon with my Gubmint Overseer and will have the opportunity to ask humbly for an application for my TSA ID card, just so I can respectfully request to apply for a license to work. Afterwards, I will go get my Gubmint required physical examination to see that I can do the boating thing without harming myself or others. For a price, of course. Funny thing is that I don't need a license to be dangerous on the waters. But as long as I try to make a  buck, it can only be through the benevolence of the State/Big Brother, hallowed be its name.

Perhaps I should ask Big Brother if I can also do that Troops to Teachers thing. I could live in Chicago and make over $70K a year and not have to actually do my job of teaching young people. Nope, never happen because I would not be hired due to ideologic differences between myself and my Socialist Betters. The Teachers Union in Chicago, (All wearing the Red Garb of International Communism) say that they only care about the children, intend to indoctrinate them critically, and to make a few bucks along the way. Is it not ironic that leftists want us all to live as peasants in a collective, but don't mind an above average salary while doing what they can to drag America down? Khruschev did say that we would pay for the rope that hangs us.

Meanwhile in Washington, the Overpaid Gubmint can't seem to keep an Embassy or two safe in the Middle East.  Methinks our National Ship has a steering casualty and our vessel is heading for a rocky shoreline.

In an answer to the Middle Eastern Moderates, the President thinks we should curtail our Freedom of Speech to appease the Barbaric Mobs in the hopes they won't use Their Right to Murder Us For Religious Reasons™ on us weak infidels. No one noticed that these attacks happened on the anniversary of 09/11...  A film happened to come out recently and every illiterate Libyan/Egyptian mobster (too poor to own a personal computer) happened to see that film on the internet and they get spun up in a righteous, murderous frenzy. Just. An. Impromptu. Riot.

Well, today is also garbage day, and this is the occasion that well paid City Employees come out and pick up the detritus of weekly living and make it all disappear and we get to carry the bags to the curb for their convenience. Forty years ago in Hayward, the trash guys actually walked up to the backyard gate and opened the gate to grab both cans, carry the cans to the truck, empty and then return the cans to where they lived, on the side of the house. Luxury.

Yes, I wish I could be gainfully employed as a trash guy, too. Good living, great pension and also the respect and admiration of the Citizenry for keeping our city clean.


As my morning gathering progressed, I was surprised by this big creature in the garage as I was grabbing the trashbags to carry outside... 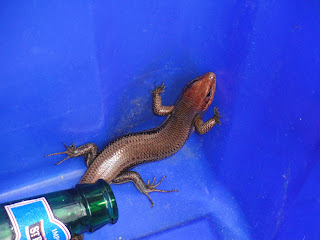 The creature could not escape the recycling bin. So I carried him outside and let him free in the yard. We have lots of bugs cruising around us so I hope he gets all he can eat and lives a long life.

Scavenging is a big business these days.

Have a nice day!

Update:
It's 4:33 and I just got back from accomplishing stuff; Got my Transport Worker Card applied for, got my physical completed and actually got my Drug Screening Whiz Quiz finished! All this in the past four hours. Mark me down as completely surprised.

I await the Drug test to return and will begin my documentation of Sea Time in earnest. I may actually have my paperwork finished and in the hands of the Coast Guard in the next ten days... Just need to finish the First Aid and CPR baloney.

Sorry for ranting up above. The news is never very good where it concerns America's safety, nowadays. Our current crop of Gubmint politicians (Especially Both Houses of Congress) rate a big fat "F" and I'm feeling a bit frustrated.
Posted by Barco Sin Vela II at 6:36 AM

Nice rant. Srsly... I use the term in the best possible way.

That's a rather large lizard/salamander/gecko.

Empty and then return the cans to where they lived, on the side of the house. Dumpster Rentals Bridgeview