Well, the last post described the frustration with batteries being stone cold dead and the lack of charging capacity. According to the Maintenance GuRu at the yard, the charger does not have poop to pop.

I would think that a forty ampere charger would have enough go in it to make 'trons travel forth and stay in a couple of batteries especially since the charger it replaced only had thirty amps.

The google sent me to various boat electrical sites and I found that Pronautic had products with very good reviews compared to my present Xantrex charger and at prices that were competitive. An order was placed on Saturday with the local West Marine for a 40 Amp Pronautic charger which would set me back $375, with my Port Supply discount. Defender had a similar product that would cost $428. Tuesday morning I went to collect my prize... The attractive Boat Consultant who made my order was not there but another young lady helped me retrieve my order. We went through the usual process of getting my payment in order when I decided to inspect my parcel a bit more closely.

We stopped the purchase process and I let the nice lady know how disappointed I was for them to have switched my order. It seems that while writing up the order part numbers got crossed and the cheapest part was ordered. I whined and complained for a few moments and went home to search online and buy elsewhere.

A call was made and there was a conversation with the boatyard about chargers and the GuRu said that it wouldn't hurt to have a charger with higher capacity and maybe that is what made the current charger fail was my system being a bit more load than 40 amps could bear. Hmmm. When in doubt, go large and over come the obstacle.

Right. I went back to the store and walked to the charger that they had in stock, a sixty 50 amp Pronautic charger which was clearance priced at $522. Only it was a 60 amp charger but priced like the fifty. Take the good deal, quick!

The Barco was brought back to the yard and the charger was installed (It's HUGE!) and I asked the guy's to replace a heater hose while they were at it.

Good thing I asked for the extra work; The heater hose was dry rotted and ready to fail. It is a twelve foot hose with most of the hose being behind bulkheads and floors. Had this hose failed I would not have seen the leaking coolant and would have wondered why the port engine was overheating in a big way, perhaps to failure of an engine component!

The bill will be in for all this latest effort this afternoon.

The Barco was finally finished at 1330, and I happily pulled out and was on the river with beautiful blue skies and warm temperatures to be enjoyed while we drove alone. 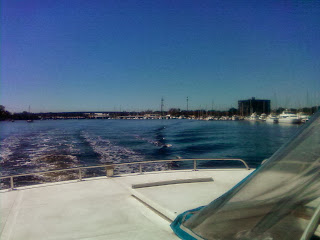 Later, I will return to Barco to do some cleaning of the topsides and readying boat for the weekend. Our next trip is scheduled to be an Outback Crabshack run at the end of the month. We will be joining the MTOA (Marine Trawler Owners Association) for a lunch get together.

Just an excuse to go traveling and simulating the cruising condition!

Have a nice weekend!
Posted by Barco Sin Vela II at 5:45 AM

Going big is usually a good ideer; I'm a firm believer in the "ya gets what ya pays for" thingie.