London to Calais and Back to Lymington 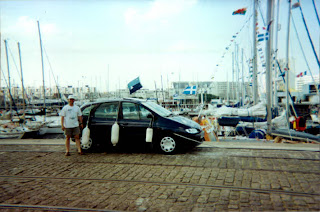 Finally, I return to talking about boating. Current events are such a drag on a person's initiative and motivation, aren't they?

There was lots to do in '99. First, at work we were still deep in the Bosnian campaigns, so we had planning work with the Ministry of Defence and our Joint Staff/EUCOM brethren in Stuttgart. I made several trips to Germany in support of our "not" war effort. Aditionally, I had to plan the trip to Calais and the transportation of kitties to California, where they would stay until we collected them.

We had paid off the boat, so all the money coming in was allotted to boat projects and equipment. We also knew that some yard work would be required (although I had no idea the true costs), I let a Little Ship Club member talk me into bringing the boat to Berthon Yachts in Lymington.

Didn't I learn anything from the time our boat was in South England (Hamble) in 1996?

Evidently, not. We planned a trip to Calais, with us departing right after dropping Mogwai and Jellicle at Heathrow airport for the long trip to San Francisco.

Out the Thames we headed, with Chris Nicholson, East Coast Rear Commodore as our crew, with the first stop in Queenborough. There was much fun and frivolity at the Queenborough Yacht club and our second crewman (I forgot his name) met us there. The normal 0400 departure came the next morning, into very windy and choppy conditions. It was so rough that I refused any relief from the helm from 0400 to 1300, after we had made it to the Calais port entry.

The charming Spousal Unit on the helm in the Thames, with the Star of the Miniseries, "Hornblower", 'The Grand Turk' approaching for a pass to port side. 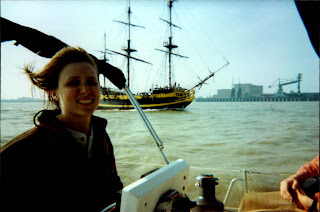 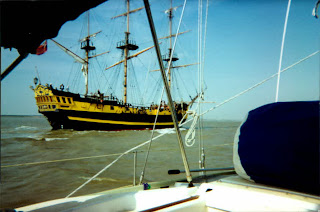 We arrived in Calais, tired but with invigorated, and Chris needed to leave to get his car back in London. After Calais he was headed to Sweden for a vacation.

The running gag at the LSC was that the senior East Coast member (Chris, as Rear Commodore) was going to all the sailing rallies via auto instead of by boat which was the expectation.

When Chris returned the next day, the crew and I conspired to get Chris to park is car on the quay next to our boat. Then we got him occupied on another boat while Jonathan and myself tied his car to the dock like a sailboat.

Oh, the entire marina came by to laugh at the car posing as a boat. Chris mellowed out when he saw that it was in good fun and that his car was undamaged. But he was a little miffed that his position of Rear Commodore may have not been getting proper respect.

The normal parties and dinners were held and we were much more disciplined, so no outrageous antics for this final visit.

We were underway for Lymington by Monday morning, 0500, following a nice tide which shot us forth like a Wildebeest heading for an oasis. The seas were smoother and thought we had to wear full foul weather garb, we were fairly warm and comfortable.

Me taking a nap on top of a chart. 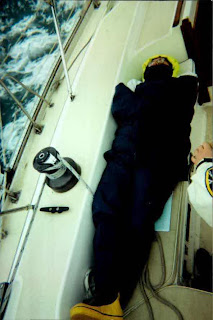 One noteworthy thing; The winds became steady out of the South, we had the sails set that we could use the small self steering unit which kept the boat on a easy Westerly course. I felt so comfortable that we turned on the RADAR and had dinner down below with no one on the helm.

Ok, I popped my head up every five minutes and kept an eye on the RADAR for traffic.

We made Lymington at about 2230 that evening. This was a fantastic, fast sail! We had planned on taking until the next morning, so this threw our plans out the door. We tied up and were on a train to Waterloo, arriving about 0130, tired but ready to face the next challenge.

The Berthon people brought the Wildebeest in and craned her out and began work on the engine as requested. They also set her up in a part of the yard which was convenient for staying aboard, which I felt was very nice of them to do. I don't think they allow people to actually stay over night while in the yard, but that was why we had friends from the club who were close to the owner of the Marina.

Meanwhile, I had two more months in the Navy and we had to stay on a friend's boat. Very inconvenient.

By this point in my career, I was totally through with the Navy. My lovely Spouse could not bear with the idea of me just walking away with my paperwork. Oh, no. That would not do at all!

Most of the retirement ceremonies were held in the basement bar of the 7 North Audley building. I had been to Captain's ceremonies, Commanders and Master Chiefs. All got the same treatment.

Bell rings the guests in, walking by "bullets" with a white rope and Side Boys. A Bosun would whistle the Retiree in.

Retiree walks in front of podium, where the Chief of Staff or his Designate (Usually an 0-6) would salute the retiree and ask him to be seated.

The Chaplain (Another 0-6) would lead the prayer and the Colors would be paraded in.

Afterwards speeches and a keg of beer with snacks would be served.

All in a room that holds fifty people and has a bar.

No. F%*$@#. Way. Was I going to do all that. I would rather walk away with a kick in my ass than go through that canned and undignified event. I had seen heroes and villains get the same "good bye".

My Lovely and Caring Bride got with Norman (right in front of me) and said that I should have a proper ceremony, one with dignity and style, reflecting our life and the future that we would soon be living.

Norman agreed and he was nice enough to call on his friend the Major, who was in charge of the Green Jackets drill hall.

Little ol' enlisted puke me, a retirement ceremony at a proper Drill Hall, off of Oxford Street in the shopping district in Westminster!!!

Free of charge.
Posted by Barco Sin Vela II at 5:53 AM

Little ol' enlisted puke me, a retirement ceremony at a proper Drill Hall, off of Oxford Street in the shopping district in Westminster!!!

Pics? There HAVE to be some, methinks!

So... I didn't know you got out of the Navy before you left Ol' Blighty. Interesting, to say the VERY least! The reason I did 22 was I didn't wanna retire at the port and hit the bricks cold... so I took a follow-on assignment after England. I'm glad I did, too... but t'is another story, that.

Thanks, Gene. Cars must be modified, right?

There are photos. And video. I looked for the pictures at lunch, no joy, but they are in the house.

The Navy did not want me to retire out of London. I could have stayed another year or so. I had to pull serious strings to be able to leave from the UK. Ordinarily, they ship you to Jacksonville and make you do all the out processing there, taking about two weeks.

Like I said, I wanted out and my plans were not to fly to the U.S., get treated shabby by an uncaring processing command and then have to return to the UK on my own dime.

I had to pull serious strings to be able to leave from the UK.

I assumed that was the case. You're the first person I've ever heard of who retired (in place) out of a foreign assignment. Srsly.