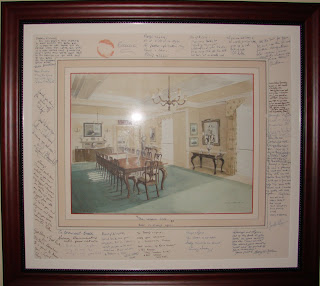 This is a Watercolor of the what had been formerly named "Queen Victoria Rifles" Officers mess. WE all had the grand idea of buying this on the spur of the moment, had everyone sign their name and box it up and mail it to Holland Michigan. We did not see this painting for over a year, and did not realize that there is a cryptic hostage note written up top, by Emma's Kiss. More on the kidnapping in a moment!

Back to the story:

We were getting the Royal Green Jackets hall on Davies Street. The only catch was that we could have as many people as we wanted as guests, but they had to have the names for the security check. Also, anyone staying for lunch would have to pay 21 pounds, and the limit of people attending would be to 26.

No problem there, as most of the guests were military. We did have a contingent of Little Ship Club people, so the crowd looked like a wedding.

In order to reduce costs, I talked the Corporal in charge of dining into letting us bring a case of Port in without paying the crazy prices that were normally charged.

I have video, but I can't figure out how to down load VHS to a computer.

Everyone showed at 1130, the four Captains were shown in and the Commander was the MC. I was given the normal roasting, then Norman Hummerstone (Representing the Queen Victoria Rifles and the Royal Green Jackets Regiments) gave a short speech about American and UK relationships, and a thorough explanation of just what a Regiment was. 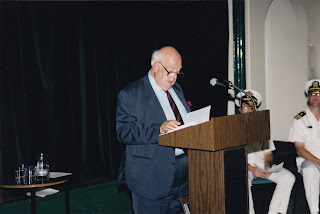 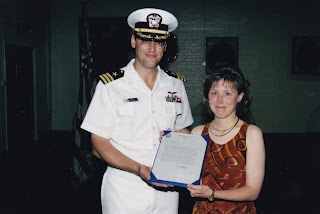 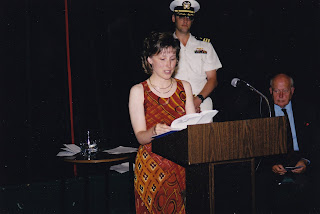 The final speech was mine. My comments were with humor, with the main points being that I had been in the Naval Service since I turned seventeen. I mentioned that I had nightmares of not being in the Navy, and I looked forward to nightmares of being IN the Navy. (I still do!)

I closed out my comments with a reading of this poem, by Don Blanding:

Mystery South of Us

Florida thrusts like a guiding thumb
To the southern islands of rumba and rum,
To the mystery-cities and haunted seas
Of the Spanish Main and the Caribbes.
Where the ghosts of Columbus and Pirates Bold
Seek the islands of Spice and the Streets of Gold.
Where the wandering phantom of Ku-Kul-Kan
Haunts the temples he builded in Yucatan,
Where the jaguars prowl and the lizards crawl
On a broken altar and sculptured wall,
Where Mayan rulers in arrogant pride
Dreamed and schemed and suffered and died.
The inlaid thrones and the sacred urns
Are filled with orchids and stag-horn ferns,
The witching moon of the tropic skies
Caresses the lips and the dead stone eyes
Of fallen idols of lust and blood
That lie in the mold and the reeking mud
Of fever-jungles The dust and bones
Of men who quarried and laid the stones
Of fabulous cities are turned to earth,
The echoes of prayers and chants and mirth
Of vanished people and priests and kings
Are heard in the night-wind’s whisperings.

Florida thrusts like a guiding thumb
To the southern islands of rumba and rum,
To the lands of mystery that lie below,
To the places I know I’m going to go.

They whistled me "ashore" for the final time and I headed out the door with my Spousal Unit and walked over to the Running Horse Pub.

Once there, all you could see was an ocean of White Navy uniforms, as my shipmates hoisted up pints in my honor, toasting my transfer to the Fleet Reserve. After an hour or so, we were called back to the Royal Green Jackets Mess for the celebratory luncheon. There were more than a few Lieutenant Commanders who tried to use their influence to get an invite for lunch.

"Look, I told you to RSVP, let me know if you were coming. None of you had any idea of the good deals I have been involved in and my connections in the Community."

You see, because I was an Enlisted cat, most people thought that I was "Just Like any other typical Enlisted Dude". Meaning that I kept to a routine of coming to work, go home and get loaded on beer. Come back to work and do it all over again.

These nice Officers never really took the time to get to know me and my career. This is why they were all stunned that I had twenty years in (They really thought I had maybe thirteen/fouteen years in) and was able to leave on half pay!

But the Lieutenant's knew. I worked very closely with a number of 0-3's and they were very aware of my off work shenanigans. This was why we had five of them present for the Lunch. They would never let a good deal pass by, especially if it involved me and the Little Ship Club. 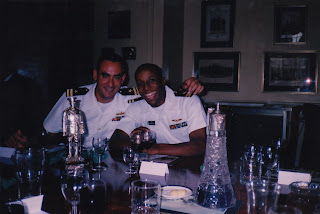 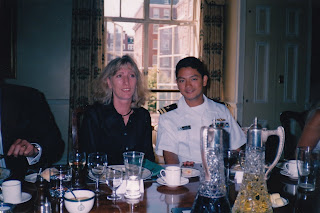 A proper roast beef was presented to us all, and the wines and waters flowed. Finally, it was time for Port and toasts. We destroyed twelve bottles of Sandeman Port that afternoon. 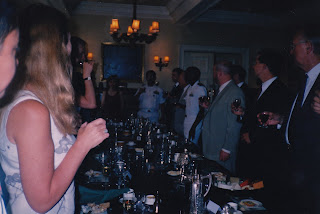 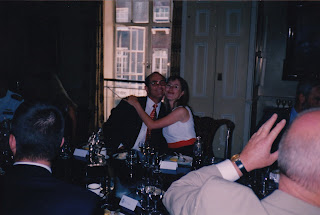 And we were just getting started!

Someone has forgotten to leave the figurines on the table! 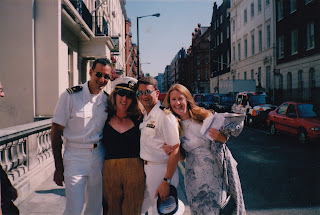 They asked us to leave the Green Jackets Mess at 1600. We moved next door to the Running Horse, had another pint and had the grand idea of returning to the Little Ship Club itself, for final cocktails. 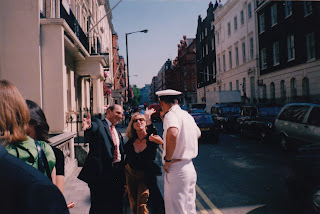 No matter. We all caught cabs and headed to the Club, where the Staff was trying to pull a fast one on us Members.

Get this; The LSC is supposed to be open on Fridays, until Eight PM (2000). THey may shut down at Six PM if there are no members present.

Well. It was Five Forty-Five PM (1745) and we twelve were present and accounted for wanting our drinks.

In our midst was TWO former Commodores, ONE Life Vice President, One very Prominent City of London Solicitor, One US Navy Commander, three US Navy Leftenants, and me.

The staff tried to say they were closing, and Norman was hearing none of it. We took the bar by force (of our personalities!) and hoisted up the drinking flag.

While all of this was going on, the Manager was arguing with Norman and Tom, one of the Lieutenant's slid over to a large easy chair and passed out.

"No matter! Keep the beers coming every five minutes, until someone pukes. Then come every seven minutes." (To paraphrase Rodney Dangerfield in "Back to School")

Finally, the Club got us to leave and we headed back to St Katharines Dock, where the
good ship "Fran" waited with a barbecue and even more beer and wine. 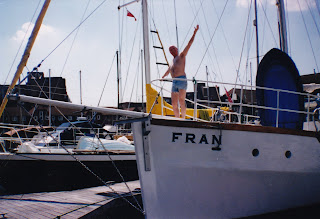 But first, Norman wanted a few private minutes with us, so we went to another pub for a couple more ESB's. The pub was an old one, one of Norman's favorites that was due to be demolished for some project. I remember two more pints with Norman and Peter, before I knew it I came to in the cab at St Katharines dock.

I stumble back to the boat and I see all of our friends from the club (Minus the Commander and the three Lieutenants) barbecuing spareribs on the deck of "Fran".

A few minutes later, the Spousal Unit rouses me out and says, "look, these people came here for you, the least you can do is sit with them!"

And with that, I walked back to the salon and sat up for another couple hours and had even more beer and wine.

What a party. The next day was "Eleven" on the hangover richter scale. There were bodies strewn everywhere. We began the clean up and my new career as a civilian.

The Lieutenant who passed out at the Little Ship Club was brought back to the building, by his drunken peers. Thusly, did our young Officer did make his way to the Command Center, where he was found by Roving Marine Guards, passed out by the door. A Security Alert was sounded and the entire building was put on Lock-Down, since a Lieutenant in whites had to have been assaulted if he was out cold in a passage way.

His career was over but he did not care since he had planned on resigning his commission in the next month.

I received a phone call from the Corporal at the Green Jackets; Someone had apparently "nicked" a sterling silver custom made figurine from one of the tables.

"How much is this thing worth?" I asked.

"About six thousand pounds, it's custom made, depicting a Queen Victoria Rifleman in WW1 attire".

There was a rapid cab ride back to the building, where I publicly chewed out those Lieutenants and threatened them in front to a very stern and equally upset Commander.

They protested their innocence and I stomped off to my office. A few moments later my boss came in and said that he had a few words with the Lads and said they would help to pay for the figurine, though he believed that they were innocent.

I went over and apologized to the Corporal and assured him that we would get that Statuette back, if I had to make everyone suffer. He was actually nice about it, he said people swiped those centerpieces, all the time! Usually, a day or so later, the piece shows up after the thief realizes it is worthless to any one but a Royal Green Jacket/Queen Victoria Rifles member.

A very strange phone call was received by me about three o'clock, Someone very close called to say "hi". I casually mention that we are missing a very important item... He admitted that he was aware of its location; I got real quiet and said, "I don't care where, or who. That Statuette gets Couriered to the Royal Green Jackets, IMMEDIATELY!" "I DON"T F^#@ing CARE IF IT COSTS YOU A THOUSAND POUNDS, DO IT NOW!!!"

What had happened, a practical joke was devised early in the afternoon. The object was carried out and hidden carefully. The problem was that we had all gotten so hammered, they forgot about the running gag until I mentioned the missing silver! They didn't know why they had that thing!

I think it is entirely hilarious, nowadays, and it was a great joke that really worked too well. The main problem with their plan was that the ransom note was written on the painting that wasn't seen again until July 2000 when we were in Michigan!

This was a legendary end to a okay/fair career.

Stay tuned for more Rock and Roll.
Posted by Barco Sin Vela II at 9:36 AM

What a retirement ceremony and party!! WOWZERS! I'm not exaggerating a whit when I say this is the "best I ever heard." Srsly.

I am SO bummed: all the pics EXCEPT for the watercolor can be embiggened. I click on the watercolor and all I get is a file name. Can you fix that? I'd love to read the inscriptions.

Buck,
It embiggen's. It is about 2Meg.

By the way, I kept out much to protect the guilty. It was literally the best party I have ever been to.

Sounded like a hell-a-cious good time with bodies strewn about! Glad the figurine got back!

Side note: If you can eat at ANY Chili's restaurant "today only"...100% of the profits go to St Jude Children's Research Hospital. JG

Ah... it works, now. And I'm not disappointed in the least. Great good stuff!

Thanks, Buck. I know that yourself and many of your readers would have fit right in at our little do. Funny enough; We can all go to London anytime and have another party. Many of the locals are still "local", and it's just a matter of 'aving time and a few bucks to make it happen.