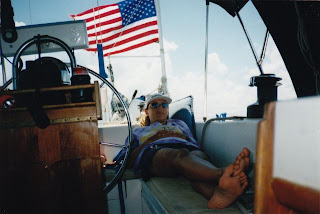 Back to St Croix;

We spent about twenty wonderful days on American soil and were sorry that we had to make tracks to the North.

I visited the St Croix Range blockhouse at Fredrikstad and had a ten minute chat with the contractors working the Antisubmarine test range. I had the right experience and clearances to work there, but there were no upcoming employment openings. I got the sense that the folks working there had no intentions of allowing an "outsider" in on their good deal in the tropics. They suggested that I go to Roosevelt Roads Naval Station and check for something there.

It just so happened that my good buddy from HSL-44 was now posted at the Tactical Support Center at Rosey Roads, so maybe he might know someone to help. I needed to lock in a job of some sort, soon. Our credit card debt was now in the range of 9K, and there was a 17K limit. I was bringing in the princely sum of twelve hundred bucks a month.

An email was sent to Rosey Roads, and a rapid reply with an invitation was enclosed, offering a place to stay for a few days at Casa George and Missy.

So we planned the eighty mile trip and were off and running late the afternoon of 20 April. We headed past Green Cay on our Starboard and rode a beam reach to the North.

The seas got a bit bumpy towards the time of sunrise, the winds had churned up some confused waves that rocked us mightily. Vieques was soon visible off to our left.

I think this is a picture of Vieques. 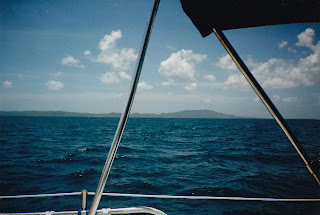 The anticipation was in the air, for sure. After all, there was a Navy Exchange and Commissary at the next stop so there would be inexpensive shopping and supplies on Puerto Rico. Not only the shopping, there was an inexpensive marina that charged $130.00 a month for a mooring. This would be very beneficial for our suffering bank accounts.

About 1330, we arrived at the Roosevelt Roads Naval Station Marina, and they were kind enough to offer us a mooring in the front row. 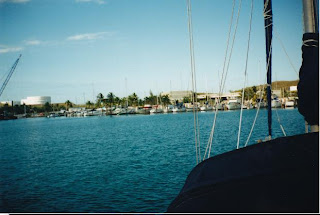 Note: I cannot share the disappointment I feel when I look at the current state of the former Naval Station. It was a vibrant place of activity and purpose. Today it looks like a vacant lot.

Another view of mooring field:

The first phone call I made was to George and Missy (They were the folks who pulled into the Metropolitan Park Marina last Saturday). George came out to the Marina and brought us to his house on Base.

There were great dinners and cold beer and wine. It was wonderful to catch up on five years with my old shipmate. George and Missy brought us out to the Chief's Club and introduced us to the Goat Locker. Many parties, barbecues and socializing was to come as we finally reconnected with the Navy. I kept running into people I knew from Mayport, San Diego and even Italy. 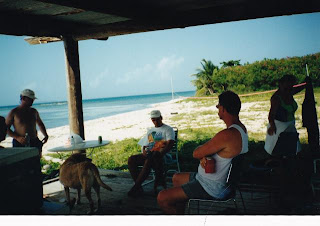 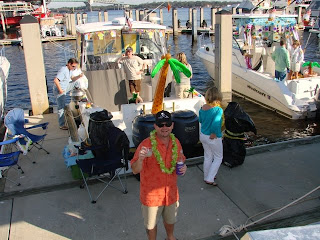 Once fully esconced in the Rosey Roads sailing scene, we joined the Navy Roosevelt Roads Yacht Club, a sister club to the Navy Jax Yacht Club. You'll never guess who pulled in a day or two later. Jack from Sailboat "Dolphin". 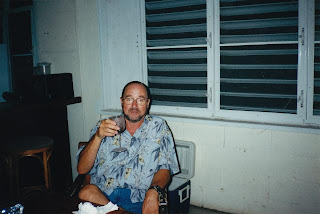 We first met Jack and Carol in Bequia, a few months back. Then we ran into them in Fort De France, Martinique. Finally there in Puerto Rico.

Jack tried hard to convince us to forget about returning home; Just go on to the real cheap cruising that is known in the Dominican Republic.

The Marina Manager clued the Spousal Unit and myself about Skippered Charter Opportunities in the area. It all sounded so tempting, but I really started itching to be back in Florida.

But first, we do some whirled class partying in Puerto Rico!
Posted by Barco Sin Vela II at 6:00 PM

Ah... I see the Chinese are on the beaches.

I also sense the adventure is coming to an end. Dang. I sure have enjoyed the sailin' and the partyin'.

Thanks, Buck. There is still a bit more but I can assure you that it was all great.

Cruising is like taking your RV across a 400 mile desert with "maypop" tires and weird ticking noises from the engine. When you arrive, you feel victorious!

Heh. I DO get the analogy. Even though the RV was well-maintained and all that there's always that lil bit o' doubt in your mind, especially when you're "miles from nowhere." And that's the kind of traveling I did... always two-lane roads, always in the boondocks (for the most part).