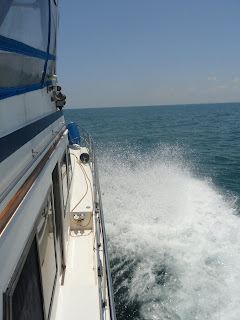 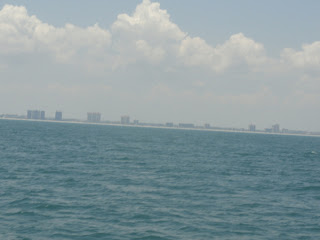 Saturday was a typically sunshiny Floriday. We were underway about 45 minutes late, but it did not matter because the weather and the tides were with us. The water was flowing out to the ocean and we made good time to downtown.
The problem was the railroad bridge. It started lowering when we got within a quarter mile and when we arrived it was down. And. Locked. For two trains. We spun in circles for the next 40 minutes watching nothing happen.
When the bridge did open we were in a busy clot of ten boats trying for the same bit of liquid real estate. Soon enough, the little speed boats cleared away and we were heading for Mayport at eleven knots, two thousand RPM on both diesels.

The water was very bumpy at the Mayport Jetties and this was because the winds began to pickup from the East which happened to be the direction the tide was flowing. Classic wind against tide; the water will begin to make big rollers which may be uncomfortable. One minute you are looking DOWN and the next UP. Easy enough for the Barco to handle, we turned South as soon as we cleared the rocks and we were in very open water.


I alluded to the sailboat race a couple days ago, and sure enough by the afternoon we caught up to about six racers. We know the folks on "Bernoulli", but because they were far enough away we did not chat with them. I did get an email address from one of the competitors, so we will send along some photographs of them underway on the ocean. 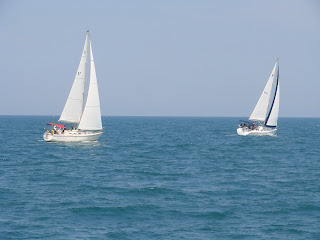 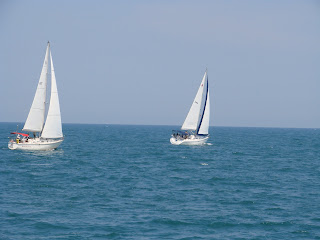 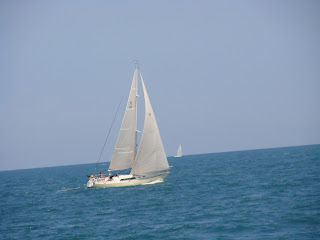 Allan, from "Bernoulli" is usually found at any and all sailing races. He brings along his loyal crew of three ladies and always have a good time, even if they don't win very often. Really nice  competitors.
I kept Barco away from the racers and had to use maximum zoom to get these pictures. Our course brought us a bit closer to the lead boat, but because they started waving and gesturing to me at 100 yards, I did not bother to take a picture and turned to the West, instead.
Being offshore, the air temperature was about ten degrees cooler than in the Intracoastal and there are no bugs. Also, since it is a big ocean, there is more room for maneuver and you don't get run over by sport fishers doing the speed of heat in tight quarters.

Soon enough, the three hours on the ocean were finished and we began the turn into the Inlet. At the St Augustine Inlet, there are NO CHARTS! The channel is a living and moving beast. Last week, a million dollar sport fisher was destroyed because they sped into the channel carelessly, striking a sandbar. Needless to say, I was hands on the throttle and wheel carefully watching the portable red and green buoys, threading our way through the surf at eleven knots.

About ten minutes later we were guided into berth 36 at the St Augustine Municipal Marina. We had a garbage bag full of water bottles and two soda's for our warm day on the water. 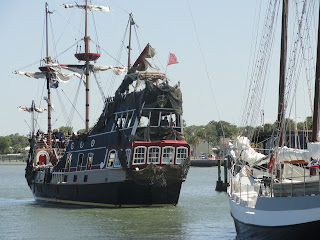 As we enjoyed sunset wine and beer, we decided to video the tour boats leaving the dock. Looked like fun! 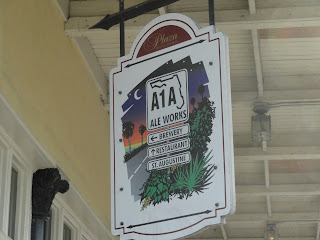 ﻿ For once, we decided to eat first rather than go to the Tradewinds. This made for a more sedate evening. WE bypassed the Tradewinds and went straight to the non-smoking American Legion Post 37 (My home post)

I love the old Florida look of this Santa Maria Restaurant. I have never visited because it looks like a tourist facility. Probably good food, but like Disney, I haven't bothered to go. 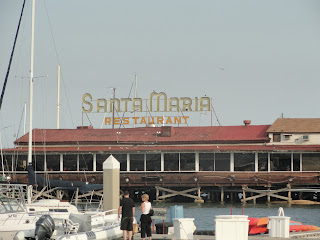 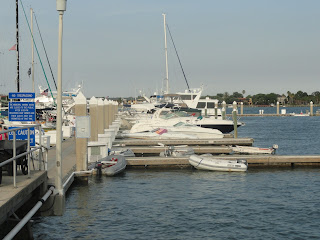 I find the birds to be fascinating. They have no problem doing their thing in front of us guests. The Marina staff dislikes cleaning up the white splotches of bird dung from the docks and boats. Cool birds, though. 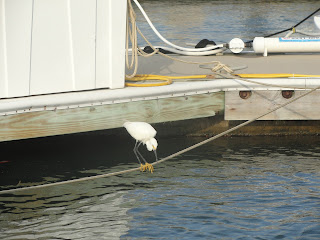 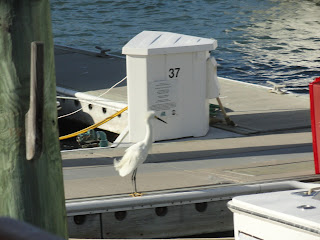 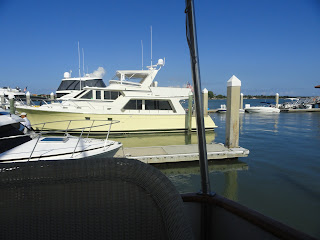 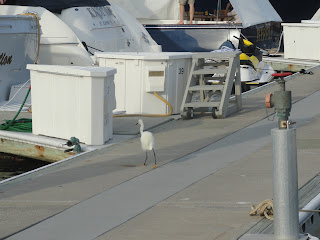 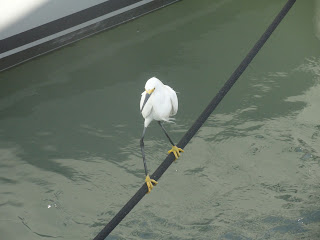 ﻿
Some more info on the Bridge of Lions; The bridge was originally built in the thirties, and the bridge was scheduled for destruction and replacement by a 65 foot non-opening span. The public got together and voted out that project and decided to rebuild as a drawbridge with the original Lions.

Locals are funny about change, aren't they? Thing is, the bridge is really quite attractive. 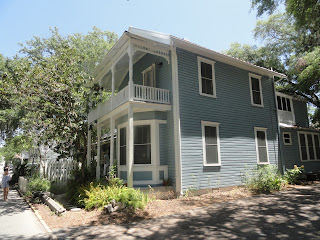 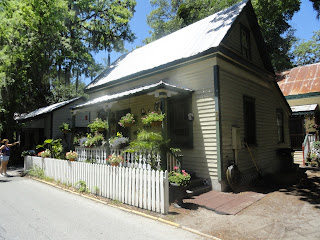 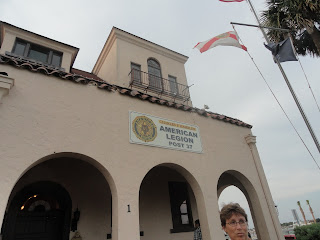 We went by the Tolamato Cemetery, the last burial there was early in the last century. They had the gates locked but there were a line of military markers with Confederate Flags for the Veterans buried there with Civil War service. One of the names I noticed was "Ponce". Like the Pacetti's, the Ponce Family is a big part of St Augustine's history.
I really like St Augustine, can you tell?
﻿﻿ For anyone who is not aware of the meaning of this table go here. It would be the reason for the season. 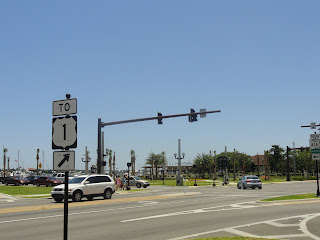 ﻿﻿﻿﻿ ﻿﻿﻿﻿
We awoke to another beautiful Sunday with clear heads and a need to walk around the town. We sook a few photos of some interesting homes and had an ice cream at one of the St George Street shops. Then we stopped by the Legion.
Ran into a colleague of the Spousal Unit on the dock, Sarah and Burt were on their small runabout a couple berths away. We invited them to have wine and cheese at sunset.
We. Had. Too. Much. Fun.
0630 I woke with a haddock flopping around in my head and we fired up the diesels and were underway about five minutes later heading North on the Intracoastal Waterway. Six hours after that, we were home.
The cats were angry with us, but they got over it.

All in all it was a most excellent adventure! Back to the grindstone...
Posted by Barco Sin Vela II at 8:00 AM

Sounds like a TRULY nice weekend, reminds me of many a weekend I spent in St. Augustine!

Old NFO; Thanks for coming by. St Augustine has always been a real favorite, ever since I sailed there on Dave Kyser's boat in '93. Going by water makes it even nicer because you have to earn your way in.

Yes K&C, there can be too much fun. I just never seem to know it until 0630 the next morning!

You do the BEST travelogues, Darryl. Srsly.

Keepin' the Legion open to the public is a good ideer. That's the only way the P-Ville VFW survives... it isn't really "open to the public" but I've never seen anyone turned away. The VFW needs the money.

Another vote for the best travelogues!

Thanks, Buck. I like traveling for those who can't get out there.

About the "open to the public", I am of mixed opinion. It seems to work well in St Augustine, and that post is smoke free. Good deal for all! Average Legion or VFW still enjoy their smokes, so I never go to my home VFW post (Life Member) since I don't care for the cigarette smoke. I don't mind if everyone else wants to smoke, They earned it.