Sunday brings the Barco crew home to do laundry and relax in the modern world of airconditioning. We stayed onboard the Barco at NAS Jax, again, meeting new people and retelling all the moldy tales of derring do on the ocean blue.
We had a bit of excitement when the thunderstorm blew heavy winds upon our boat causing same to bang upon the dock in an undignified manner. The Spousal Unit and our friend Phil deployed all the fenders in an attempt to cushion the impact, and of course, I was elsewhere getting a haircut.
The Spousal Unit was unhappy with my absence, and she glared at me as I sauntered up carelessly with the goodies from the Navy Exchange.
I began my assistance by futilely pushing against the hull as we added more fenders and settled in under cover while we waited out the winds and waves. About fifteen minutes later it was peaceful enough and we were able to hike up to the Navy Jax Yacht Club in time to watch the final moments of the Poker Rally finale. We missed the whole party!
Nothing to do but have some wine and beer and say goodbye to the other club members as they left two by two for home. That left us alone with our friend Phil.
About ten minutes after seven o'clock, the loudspeakers on base made the call for colors. We stood respectfully at attention and listened to the recorded bugle played Retreat. We stared into a bright sun which was still high in the sky...
After colors, we shared a giggle that someone was going to feel the wrath of the Commanding Officer or at the very least the Command Duty Officer... So Phil got on his cell phone to get hold of the Command Duty Officer, who happened to be a member of the Yacht Club.
About ten minutes later, a gent showed up wearing the sea camouflage utility uniform, wearing a badge of authority. Turns out he was not the CDO, but was the regional Command representative and he was very interested in getting hold of the Station CDO, if only to ask why colors played about an hour and a half early?
Ah, what mirth we felt as we snickered about how it was going to suck for whomever was responsible!
It was a gorgeous evening under the cooling Florida sky with a beautiful full moon coming up out of the East. There was a gentle breeze blowing from the sea and it really was nice to be outside talking about boats.
The main thing I was yapping about was this latest boat I spotted on Yacht World.
$39,000.
Want!!! 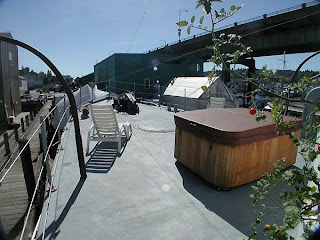 As you can see, the gun was removed long ago (Can I get one with a gun?) A more useful bubbling tub has been placed on the fore deck.
As we chatted on through the evening, I swelled up and mentioned a couple of times that if we could score that Mine Sweep and brought it back to NAS Jax, why, we would be BOATING GODS!!! motoring up and down the St Johns river, 139 feet of Naval history with a rag tag crew of ne'er-do-well retired sailors with base access, Navy ID cards and no supervision!
What could go wrong?
Getting the boat back to Florida would be the first challenge. Let's say we do make it back here in one piece, is there any other considerations?
Yes. The thing about wooden boats and warm Southern waters, they don't go well together. Wood eating parasites will soon set in and the maintenance would bankrupt us. Fuhgeddabout the fuel costs. Buying this boat would be the easy part, the financial headaches would surely come later.
If I was retired, fully, I could afford the initial purchase costs (We paid more for the roadster) but we would have to keep this nice vessel in the Northwest. Maybe cruise to Alaska every year, staying out while the Summer was relatively warm and inviting.
So much for that brief dream... Oh well. Half the fun is just looking and imagining, right?
Another photo: 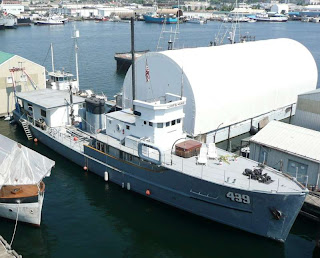 What sort of work does it need (besides the gun -- and I'm with you on that) to get it sea worthy? Usually these things are serious money pits. Engine malfunctions are all $10K problems...

PS - Just checked it out on-line. It would be interesting to know the condition of the engines and the hull (some sort of bonded survey report). It sounds as if the top deck and living portion of the mine sweep is in passable shape. My sense is that you'd need to add another $60 - $100K minimum to take her to sea. Maybe more. Details such as when she was last hauled and what they found on a wood boat are key. Just hauling a 140' boat is an ordeal. While a steel hull is not a good idea for a mine sweep of that vintage, it would be more comforting.

But I'm with you. If you could get it ship shape and Bristol fashion, you would be the envy of all who know you and all who don't.

I have looked over some of the other websites, too. It has been a commune of some sort recently. I have a feeling the propulsion system is inop and needing to be changed.

Just good fun to fantasize about owning a former Naval vessel. I would bet we could acquire an Osa II or a small corvette from the Russians for 20 or 30K.

What could go wrong?

Heh. We haven't the time to indulge in counting the ways... especially if you found one with gun.

Even a Grisha Class Frigate would be cool.