In honor of my last post, I thought I would add in some odd photos

These are from a couple years later and forward. Here is a couple from '83, flying South down the coast of California. I was a Sonar Operator/Search and Rescue Swimmer in the SH3D/H. As usual, click to bigify. 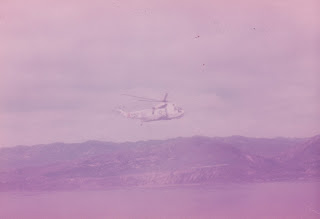 The following are the very few photos I took while in HSL-84 flying as a Radar Operator/ SAR Swimmer in the SH2F. I really disliked the time I spent in that particular squadron and was never very happy. The Sea Sprite had a less than stellar reputation among us aircrew and I know I was always ready for a crash. Our squadron was safe and we never had a major incident. In order to get out of this squadron I left the Navy in 1988. 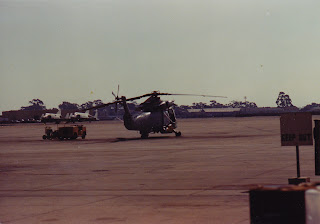 The early '90's found me in a new situation. I reenlisted and was assigned to HSL-44 flying in the SH60B Seahawk. I am in the doorway lowering somebody to the deck. 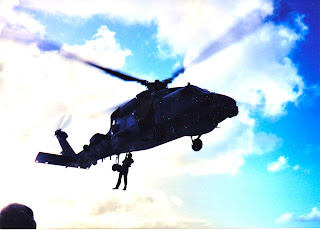 I didn't work out as much as the other guys. I used the stair machine and such. They all pumped iron and I suspected they were all a little funny. Second guy from the left was onboard the Samuel B. Roberts when it struck the mine in the Persian Gulf, back in '88. He had some really good sea stories about saving a ship. I'm wearing a Jimmy Buffett shirt.

I was perpetually annoyed, didn't realize I was having a good time.

Heh. I felt that way a lot o' the time, too. Especially up in NoDak.

I still feel annoyed, but I'm getting better.