We had a really nice dinner for eight, each dish paired with a specially chosen wine. Our guests arrived ontime at 1830, each nice person was welcomed with a glass of Francois Montand bubbly. Click to enlarge for detail. 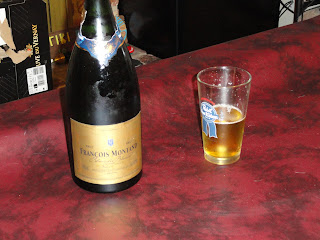 I really like this Methode de Champagne because it tastes as good as the more pricey Champagnes and it is a great value for a Magnum (1.5 Liters) at $16.99. The reason the beer is next to it is that I had just opened the bottle and poured out some and I was getting ready to go outside to barbecue the shrimp.


One does not cook over open flame without having a beer, does one?


Our first course was coming up and I had to get running to put the food out. The Spousal Unit had prepared all foods earlier in the day and all we had to do was set it out. While SWWBO was chatting with our guests I placed ten skewers of shrimp which had been marinated in fresh garlic, chopped chili peppers and olive oil.


The cool fact for this course was that I had acquired the pre-skewered shrimp at the Commissary for a buck a piece! Each skewer had eight shrimp.


I preheated the propane bbq to about 500 degrees and popped the skewers on the grate. I sipped my beer and did a sixty count, flipped them over. Did another sixty count and pulled them out of the fire. The shrimp had a very slight char on the edges and was cooked wonderfully.


I de-skewered the shrimp into a bowl and announced the first course.


But everyone was still working on the champagne! darn it, those Magnum's get the party started and it seemed that the bubbly kept a-going.


Anyway, the first course was served along with an kalamata olive tapenade which was ground up olives, anchovy, lime juice, garlic, fresh rosemary (From our backyard!) and olive oil. This was served with Panera baguettes and of course, the shrimp.


The wine paired with the first course was a Rhone Rosé. This was a special wine made up of 70% Grenache and 30% Syrah grapes. This means that the wine was not as sweet like your normal Rosé, which I do not care so much for.


While everyone enjoyed the course, I ran to the kitchen to monitor the soup and the braised beef. The dessert course was also placed in the oven to cook. Multi-tasking!


I also stayed ahead of the mess by washing pans and dishes as they returned.


The next course was the soup. Roasted Acorn Squash was the flavor, it was roasted earlier, and then pureéd with shallots. This soup was served in small bowls topped with chopped gorgonzola and crispy prosciuto bits.


The wine paired with this course; 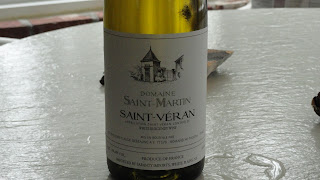 This is an excellent White Burgundy, which is kinda like a Chardonnay, except there is only a fruity flavor  and none of that Oak nonsense. Our Guests, Tom and Susan were verily impressed since they do not like Chardonnays. Pure, clean flavor which paired very nicely with that wonderful soup!


Now we are starting to run; I pulled the Braised short ribs from the iron pot earlier, so I had to rewarm the beef in the microwave, while reducing down the gravy. The gravy was a mix of cheap Cabernet with even cheaper California port, along with onions, carrots, shallots which had braised in the pot for about four hours. While getting the beef together, we also heated up the cauliflower mash (Boiled cauliflower and rosemary mashed like potatoes, only less fattening).


She Who Will Be Obeyed, our guest Jane and myself worked efficiently to plate the third course. I placed the cauliflower mash on the plate, scooped the roasted veggies (Parsnips, carrots and brussel sprouts!) onto the mash and placed the braised short ribs next to the mash and veggies and poured the gravy over it all.


The neat thing about braised short ribs is that the bone falls away from the meat so you can eat with just a fork. No knife is necessary.


The wine pairing for the Beef Course;


This was the most amazing wine, it was imported from Argentina and the Wine Bubba at Total Wine assured the Spousal Unit that it would go very well with braised beef.
He. Was. Totally. Right!
Seriously, this wine made quite the impact on our guests. We drained all four bottles expeditiously, while thoroughly enjoying the main course.
Why does a wine dinner always have to be a noisy affair? This fact was noted by all as we all tried to get words in edgewise into the table conversation!
Now the dessert course...
Baked pear and cranberry crumble was retrieved from the oven. we topped the dessert with Blue Bell Vanilla Bean ice cream. The wine paired (Pun alert!) was a Merryvale Antigua desert wine, personally won from the owner of Merryvale Vineyard last year, in a drawing held at the Yacht Club.
While enjoying the dessert wine I read a toast from the Book of Blanding. Don Blanding, that is.
Here is a little blurb from the Merryvale site. Outstanding dessert wine!

Golden amber in color from its long aging in French oak, the wine is a complex combination of nuts and orange-peel aromas. Thick and rich in the mouth, the nuts and orange-peel theme continues from the entry through the long finish, highlighted by the many subtleties from the fine brandy and time in the barrel. (500ml bottles)
$35.00  / Bottle
$420.00  / Case

Finally, we got to the cheese course. Earlier in the afternoon, some walnuts and pecans were coated in brown sugar and cinnamon and roasted for 20 minutes at 350 degrees. The nuts were plated with gorgonzola, stilton and aged gouda (Five Years and Crispy!). The wine paired was thus;

While doing the Port course, we read a couple poems from Don Blanding's book, "Floridays".


What a dinner event! The perfect amount of stunning food paired with equally tasty wines.


We cleared most of the clutter, got the plates into the dishwasher and moved to the billiards room for more loud conversation and post dinner drinks.


I had some of this;

The party wrapped up at midnight. Great fun was had by all.
Posted by Barco Sin Vela II at 10:51 AM

Dang. I'm so very hungry now. It's been years (and YEARS) since I've been to an affair such as this, and an eon since I threw one myself. Well done.

As for... One does not cook over open flame without having a beer, does one?

One most certainly does NOT.

I see how it is.....I need to come round more often! But the comute is HELL!
Say "Hey and Best wishes for a speedy recovery to SWWBO"
May have to take the new toy round your way when I get back!

Buck; Sometimes one must throw a "do". Now that you have the proper place for a "do", why not have a little get together and invite your nice neighbor and maybe some of her friends.

Bruce; We have streets named for us all over Europe. And they're all Einbahnstrasse.
Get home safe and we will do all this again. Especially after the ankle heals.

Sounds like an awesome time! Several years ago, Ken and I were invited to a friend's home for an event similar to this. It was so much fun!

Hey K & C;
All this good living started when we moved aboard our sailboat Wildebeest III back in October 1996.

You'll see... When you move aboard!