Comets on the horizon

There are a two comets visiting the Sun this week, visible to the East if you have a view of the lower horizon, about 0500. This is one of those lucky deals where NASA has a space probe in position to get some high quality images and analysis of dust spewing forth from the ice balls. I enjoy seeing a comet whenever I can because they represent long lost building blocks from the origins of our Solar System. Chunks of matter from deep space that return to the Sun, sometimes to pass and continue their journey back to the Oort Cloud from where they usually originated and others to actually impact our Sun. The last clear comet I was able to see clearly was the Hale-Bopp of 1997, which was viewable in the Western sky.

Today, the sky is cloudy so I will try again over the next viewing window which will reoccur before dawn every morning.

Before we had mass communication and electronics, astronomers watched the heavens for mystical portents or messages from above concerning the current events of the day. Comets were considered particularly important because people thought that a speedy message was being sent from the gods to us hooman beans about the screw-ups of our Rulers and the behavior of the people in general.

So... We have two comets (that were only recently discovered!) stopping by Mercury, where NASA just happens to have a space probe orbiting? Makes one say,  "Hmmm."

The weekend was pleasantly boring other than a lucky discovery of a small shop across the river which sells bulk Indian spices. We are now in possession of a fragrant collection of  those spices the likes of which only the very wealthy could have possibly held two hundred years ago. I'm talking about literal pounds of garam masala, turmeric, coriander, cumin, fenugreek, star anise and so forth. The Spousal Unit has had to transfer all spices into their own three drawer storage cabinets which has now opened up space on the counter-by-the-stove. What a mess! And we were able to gather such goodies without having to contract with a shipowner or spice caravan. 'Murica! 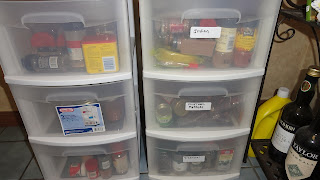 This week we have guests coming in from Michigan so the Barco home will be a-bustlin' with activity. A keg of Fuller's London Pride is inbound for our kegerator and the gathering of good food(s) begins in earnest for the Thanksgiving celebration.

Have a nice week and keep your eyes in the skies! May the visiting comets bring good luck to you readers and to us here in Florgia.
Posted by Barco Sin Vela II at 3:34 AM

A friend of mine had a Comet. TERRIBLE lil car.

I cling to the fact that they're chariots of the Gods. Then again, I also believe in Odin's corpse hall and want to die with a sword in my hand so the valkyries (not the B-70's) will haul me there.

The tooth fairy is a fraud.

But I'm sure that under the Affordable Care Act that I can keep my insurance and my doctor… I'm simple like that.