Clear skies and set to start the bird on it's journey!

To the Weber Kettle! First stop for Tom T. Turkey as he moves towards the dining extravaganza to be held not later than 1700.

The temps are in the 60's and we await Phil and the Mom unit who should be here in the next half hour.

It was a bit nippy out last night, temps dropped to the 30's. No problem for me because I had about 24 pounds of Siamese cats on me and they provide intense warmth.

Here is the view out in the backyard; 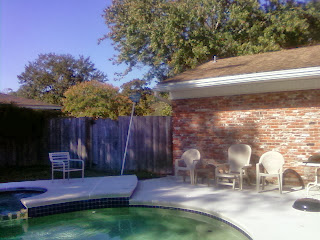 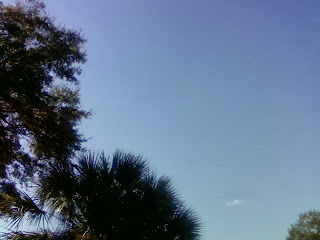 Beautiful day to cook turkey on the grill in the Southern sunshine!

Secret Santa dropped off some stuff on the billiards table. Useful items for playing some new games in the neighborhood, iffen' some of our friends from down the street want to come by and play. (I have been hearing about some sucker punch game being played which is apparently fun for all the family!)

lf to r
1951 model of something that is 32 and special. In the light she looks like a spring chicken!
1969 model of three oh eight goodness, oh my! Why, one could almost reach out and peacefully touch someone!
1965 She's but twenty two, repeats over and over.
1979 year of a twenty two that's younger yet repetitive. 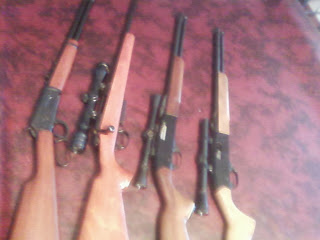 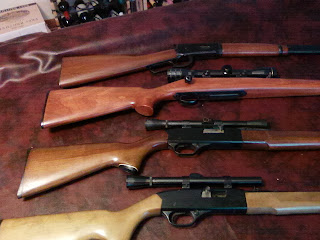 These goodies will supplement the others in our safe, which is fun and nice!

Have a great Thanksgiving and definitely have fun in a safe and sane manner!
Posted by Barco Sin Vela II at 9:48 AM

Well of course you have to play with guns on the holidays!