Anyone ever see "Weird Science"? Two nerdy kids with no chance at chicks, become empowered by Kelli Le Brock.

The scene I have in mind is these two geeks are in a Chicago Blues club, and the dark haired kid starts into a story about an eighth grade girl with large...

Sorry, I digress. I will take on the persona of "Wyatt", from previously mentioned film. (I blame River City Vibe for continuing with the Weird Science theme)

Fats, man. Lemme tell you my story, man. Last year, I was insane for this crazy little sailboat...

The dream I had for sailing started in a not-so-normal way. I was working as a Naval Reserve Recruiter at NAS West Coast, California. A newly signed up applicant told of his new hobby, sailing. He said the Navy had boats for rent and that anyone on Active Duty could rent one of these boats. Just do a short course, get checked out and voila, sail the ocean’s blue, on a 35 foot Navy rental sailboat.

Naturally, I didn’t get a chance to take those lessons. But 1986 saw me begin my earliest dreams of the ocean, especially not with any “haze gray” blocking my view. It just so happened that I enjoyed the Buffett music that had a continuous message of getting away from it all. Then add to that a sense of real dislike of what I was and what I had been doing up to that moment. I knew that I could be doing something else.

The problem was getting started.

After all, only rich people sail, right? (I'm gonna give Joe Bones a call and borrow some money.)

1989 saw me move to Jax Beach, Florida, I lived in a little apartment on A1A. I loved Buffet's album by the same name; So I had to live There. One day, I saw an ad on the squadron bulletin board that read, “16 Foot Hobie Cat, easy to sail, even easier to own; $750 bucks”.

I just happened to have just that much cash on hand, and rather than waste this lucre on a couple of visits to the local taverns, I thought, "Hey, I could actually start off on the sailing dream."

So I called my new girlfriend, the prospective 'She Who Will Be Obeyed', and told her that I was buying a boat. We were going to start down the pathway to ocean cruising by starting out with a small beach boat. Also, I had someone who was willing to teach me how to get this Hobie moving.

She was enthusiastic and mentioned that she enjoyed sailing, too. Did I mention that she just liked me, didn't matter if I was accomplishing a thing.

A squadron mate acquired a Prindle 16 at the same time and naturally, (the way we bragged) we became the real “sailors” in our helicopter squadron. Anytime there was a beach gathering, we were there with our catamarans. Two beer goggled buffoon’s careening in such close proximity, it’s a wonder we didn’t get hurt. 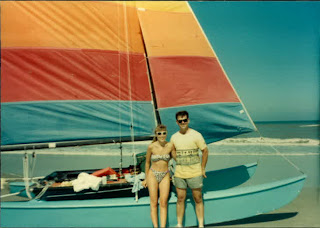