We entered the next portion of the St Johns River at the Volusia Bank, which the Army Corps Of Engineers have kindly added in pilings set up as a sort of cattle run. It's ok with me, since I really detest having the bottom of our hull have much direct interface with the mud.

Don't forget to not leave a wake!

This was getting exciting, since there were now a few more boats lurking about, going as slow as possible. Of course, the State Fish and Wildlife enforcement officer waiting at the other side, looking lonely and bored may have had more of an influence with all of the good behavior being demonstrated by the zippy power boats.

A typical zippy power boat with a nice family. 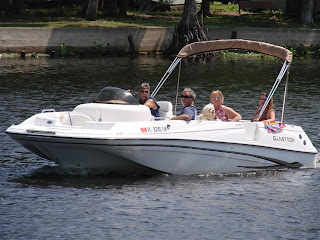 An Airboat. These things enable people to rapidly traverse shallow and grassy waters. 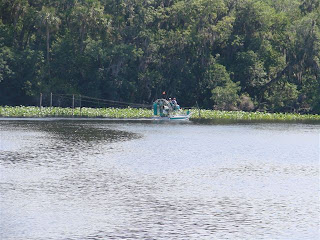 We entered the main channel and immediately noticed the flora and fauna. Especially the fauna. It wasn't that we saw many alligators, more that we constantly saw them. About every clearing on the bank had one or two loafing gators, lazily relaxing in the warm Florida sunshine. 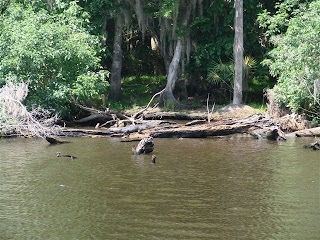 This would not be a time for swimming, no sirree!

The time was approaching noon, so we were really getting the vivid hues of spring, and all of the vegetation exploded in greenness. The river was probably at its best viewing condition and we were feeling the excitement that visitors from a hundred twenty years ago would have described in better prose. Plus, the air temp was a sultry eighty degrees. 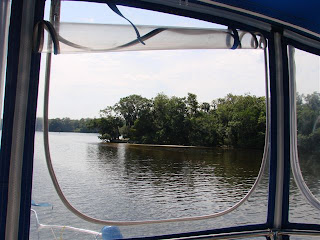 Our journey up (note I say UP river and not DOWN, we are actually heading towards the beginning of the St Johns) river is slowly taking us to a little town called "Astor". It is now a retirement resort community of trailers, small cottages and encampments mainly occupied by refugees from the northern, snowy parts of North America. 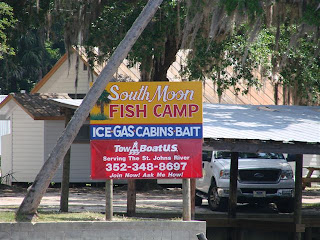 Astor was the place to be, back around the nineties. Eighteen
nineties.
A little taste of history from astorflorida.com:
In 1763, James Spalding and Roger Kelsell established two trading posts on the St. Johns River. Their "upper store" was located in Astor, with the "lower store" south of Palatka. Spalding chose the Astor site because it was at the crossing of three Indian trails coming here from the southwest, west and northwest. The location was also used by several Indian villages for launching their canoes when fishing or hunting parties wanted to explore the river. In 1769, Gov. James Grant promised Spalding to make a town out of his upper store. He didn't keep that promise. In 1774, Indians ransacked the store and the storekeepers fled to Shell Isle. When Spalding closed the store, the chiefs agreed to pay for the damage. By 1776, William Panton was in business with Spalding.
Later, Mr. Forbes succeeded Panton and Mr. Leslie succeeded Spalding in the business. The site was later the location of Fort Butler, a crude log stockade and barracks erected in 1838. It was designed to protect the river. A post office was established at the fort in 1839. The fort was abandoned in 1843 for health reasons.

William Astor, the grandson of John Jacob Astor, bought 12,905.93 acres on the river from the Moses Levy estate. With his partners, William S. Boyd and Richard McLaughlin, a 12,000-acre town site was laid out and named Manhattan. Lots were 20 acres and square, surrounded by roads on all sides. The downtown section had normal size city lots. Buildings included a nondenominational church, schoolhouse, and free cemetery. William Astor built the Astor Hotel in 1878. It included a post office and Clyde Line steamship agency office. The town was renamed Astor in 1884.

We continued past the little down town and proceded to Lake Dexter and to the rest of the river. Here is a google view of the area.

Here is the final sign of Astor as we enter Lake Dexter. 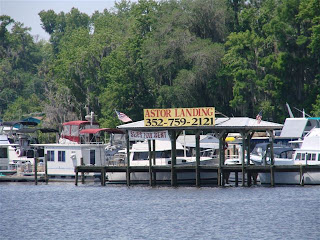 The winds began to pick up, and the little lake was choppy. We also started to see many more boats on the river who would make sure to go as fast as mechanically possible, blowing by us in a frenzy of wake and splashes.

Soon, we were back in the narrow portion of the river where the river had been straightened out to make it easy for barge traffic. But the old curvy parts, called "oxbows" are still there, deep water loaded with bass and brim, and the accompanying bass fishing boats. I could speed by at 7.5 knots and not really worry about the wake. 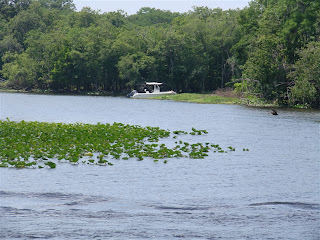 Here is a Trawler anchored in an Oxbow. 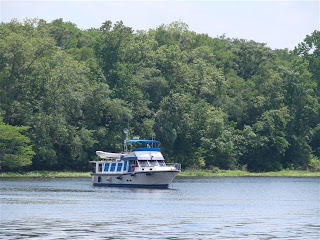 This is not me at the Helm 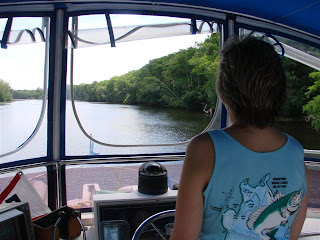 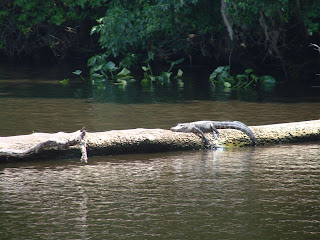 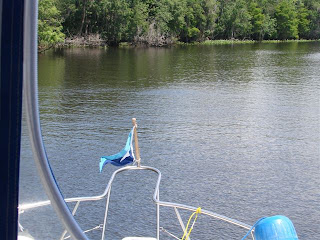 Some geek in a rented boat starts to follow us closely, so he can jump the wake and generally abuse the rental boat. 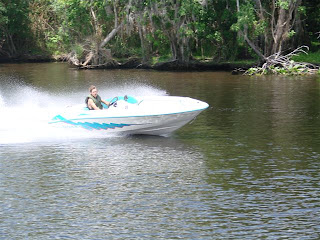 The Barco was now approaching the three and a half hours underway point, and we were rapidly approaching Deland. There was even a bridge to call and request an opening!

We slowed to three knots and dialed up channel nine on the VHF and asked the nice bridge tender for an opening. We then had to explain the spelling and meaning of the boat name (Boat Without Sail) and we motored away.

I had no idea how far we had to go, since the map chip on our GPS had run out at Palatka, and we were using a paper NOAA Chart, but not really using it by marking our position. I mean, this was such a fabulous day to be on the water, and depths were proving to be generously deep, so I didn't do a great job (ok, I only knew precisely where we were, not how far to go...) in having a precise plot. 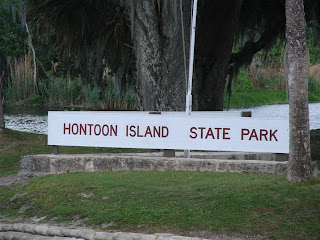 What I am trying to say is that we were suddenly at our destination! I brought the boat to a slow stop and literally backed it into a terrific berth on the end of the "T-Head".

We were tied up in minutes, plugged into two 30-Amp power receptacles and I was walking up to the Ranger Office. Seventy five bucks later, I was back on the boat and beginning a great pounding of barley pops. What a perfect day! 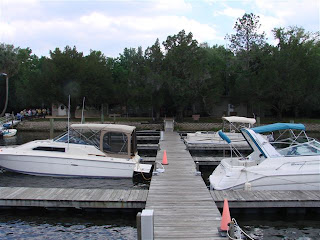 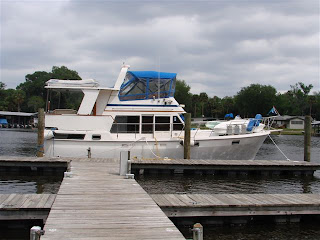 Stand by for further communications.

I should probably know this (my brother being an east coast trawler person himself as well as a marina/development consultant), BUT $75 a night for 30amp??? - well, 2, 30 amp??

But, gorgeous photos, scenery (as long as swimming not required...) and thanks for including the history! I kind of knew from my folks living in Satsuma on the St. J, but was 20 years younger and not really paying attention :)!

Looking forward to the next installment...

I was not entirely clear about the 75 bucks. Georgetown Marina charged EIGHTY bucks for a night. I find that excessive, too. St Augustine is the same.

Seventy five for the five nights we spent there.

We will be back.

That was a very relaxing trip down the river you took us on. Thank you!

Ever read Cross Creek by Marjorie Kinnan Rawlings? She took a boat trip on the St. John's long ago, the 40's I think. Good writer, she wrote the famous book The Yearling.

Hey Bob,
I read two and a half Guide Books on the St Johns River, while we were out there.

All three books mentioned the Rawlings trip and even had photo's stolen from the book. But no, haven't had a chance to read it.

Presumably, that story about the St Johns will be good, in a way that the MacDonald books still are about a Florida passed.

Another book mentioning the upper St Johns is "Alas Babylon".

My initial thoughts were the same as Ann's, but your clarification makes the fee sound most reasonable. The only time I've paid similar (read as: as cheap/reasonable) "docking fees" for the RV have been in state parks, as well.