Wasn't I just here Monday? Get on with the story!!

Great weekend, here in Jacksonville. Warm breezes and clear skies making sunburn a problem once again to the uncovered.

Delmonico steaks with Spanish wine started our weekend, followed by a Heidsieck Monopole Champagne to round out the night. The decision to stay home for Friday was easy, since we had a couple hard nights entertaining guests and were still feeling the weariness of the previous ten days.

Hyacinth Kitty was not pleased with our decision to stay home, since her habit is a boat weekend that begins at 1800, Friday. On the boat, thank you very much.

Saturday morning was a slow and unhurried one, until a call came in from one of my so-called friends; He asked if I was busy... Why, no. Just trying to come up with something for my Blog.

Could I go to the boat and bring some parts? Hmmm?

Sure, ok. (I haven't mentioned that this guy is a Diesel Technician, did I?) Oh yes, I am available. Good ol' John had helped me just a couple days ago, changing RACOR's on the Barco, it's the beginning of a underground economy relationship!

So the Spousal Unit and I bustered out to the local boat parts place on Lakeshore (Lamb's Yacht Center) and waited 20 minutes to get a couple of fuel system parts for a 6 hp OMC outboard. Then it was off to the Barco to await the sailing arrival of my friend.

An hour and a half later, they creeped slowly into Pirates Cove and I met them at the dock with the parts and burgers w/PBR. Naturally, there was a screw missing, so off to the hardware store we went. An hour and a half after that trip, my friends were off and running, like a herd of turtles.

That was my morning. Not too bad, especially since I had no where to be and the Florida sunshine was present and accounted for.

After returning to the Barco from our cross island Force March, we cracked into the afternoon refreshments and did lunch. I brought out my fish killin' stick and proceeded to drown some worms. A power boat pulled up with a couple of retired airline pilots, who seemed nice enough.

That is exactly what took us through to sunset, which was when I decided to install our new Barbecue device. (99 bucks at West Marine!) and then the real beer and wine started to flow, coinciding with the proper grilling of our beef products, after which more beer and wine were consumed. We got tired of yelling across to Bud and Ed, so we invited them aboard to quietly continue our important conversation. 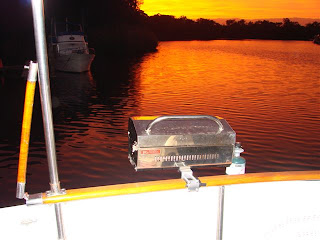 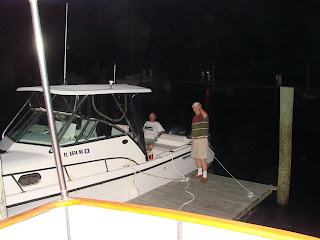 Why yes. I flew with that person from 1982 through 1985 when I was at an Alameda Helo squadron. (Look at the bottom of the page at the white helicopter, the mentioned person may have been flying that day!)

What a small world.

The next morning, we had some real bad storms passing through, there was a tornado watch and some real threatening clouds circling us. We packed the kitty into her bag and ducked out to the ranger office for cover.

This Manatee came up to say hello. 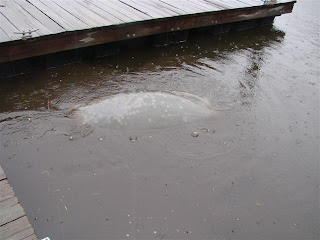 The manatee was in and out of the marina, lurking about in about two feet of water. You could see it about three or four times a day.

The next day, the weather had cleared up and we decided to take a canoe up the St Francis river. 15.00 for three hours, not a bad rate. We would normally take our kayaks, but you will see why we didn't. Foreshadowing... 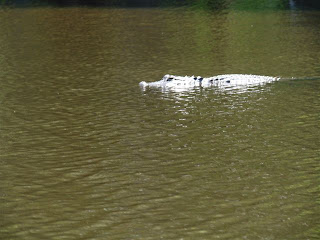 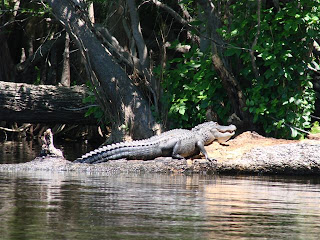 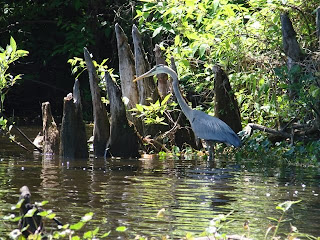 We paddled to Snake Creek, and halfway up this creek, with both paddles, we started being slowed down by the water hyacinth rafts, to the point of having to be surrounded and push our way through.

Did you know that water moccasins like to be in those patches of plants?

Maybe not, but I like mobility to avoid my friendly snakes. They can have anything they want but me.

So we made a dignified retreat to the reverse course.

There were plenty of bass fishing boats and pontoon boats, but most annoying were Yahoo's who rented party houseboats traveling up and down the creek with their favorite music blasting out, making rebel yells and drinking to excess.

Looked like good ol' fashioned fun to me, but really, turn the music down and don't try to match Jim Morrison singing, "Break on through to the other side...!" In unison. Ouch.

We paddled back and turned in the canoe. That was a workout! 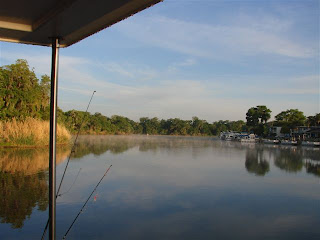 We found ourselves short of that substance that turns bitter coffee into the happy, blonde way to start the day, half and half. We were roughing it, alright. We also needed some mayonnaise and an excuse to see the booming metropolis of Deland, Florida.

I also found that I was down to about ten beers.

Most people would be able to suss out the reason for our trip to Deland. Nail clippers, right?

Off onto the trusty electric powered ferry we did go. 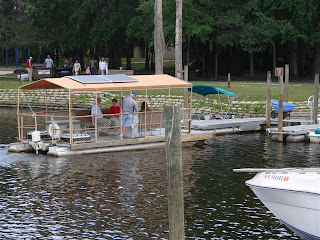 Good thing the cost of the ferry was the exact change I had in my pocket, which was "none". We went over to Hontoon Resort and Marina, where ewe too, can rent a pontoon boat for about 65 bucks!

Hontoon Landing is actually a very nice facility, not quite as rustic as the State Park. They have all the amenities like worms, t-shirts and beer. But it is gonna cost 10 bucks for a six pack of bud. Not. 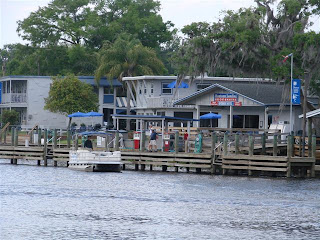 I stepped into the marina shop and asked if they had a number to a Taxi. They began to hand me a phone book when a nice gentleman offered to run us into town, since he had missed a maintenance appointment for his houseboat.

Jaii Hein is his name and Sound Productions is his game. Jaii was very, very nice to volunteer to drive us to the Main street in Deland and show us his home town.

I need to find my radio station voice over:
For quality Sound Equipment for your next concert or charity doo, call Jaii Hein Sound Productions!
Big sound at budget prices! 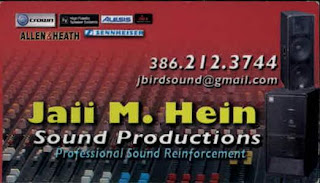 Jaii is the kind of person who may be growing older, but definitely not up. We drove into town and had lunch at a little soup/sandwich kitchen. Then, off to the record store (just like Rasputin Records, on Telegraph Ave, Berkeley), a new age shop where Jaii bought one of those "Coexist" bumper stickers and also a quick stop for a haircuts, for Yours Truly.

Jaii proudly told me that he hasn't had a haircut since he left the Navy in 1973! I on the other hand, have had the same hairdo since Jerry Garcia was still alive and jammin'.

Back to Winn Dixie for some PBR and mayo and back to the boat.

Really nice guy, we offered to have him stop by that afternoon, but it didn't work out. We did honk as we passed him the next morning. Hope we all get to meet again, as Jaii made our dull afternoon into a great event. Thanks, again.

It was time to try fishing some more; So I cast my Rapala bass lure a couple more times. On my third cast, I actually had a bass on the line. It was fighting me and I was trying to get some attention for my victory when I lost my head and gave a mighty tug to set the hook. The bass jumped out of the water and spit my miserable lure back at me. That was the only time I had even a smidgen of luck.

Oh well. I don't really like eating fish, anyhow, and all I would have done was snapped a picture and tossed it back to live a little longer.

Buck complimented my sunset picture of the grill, so I figure I better add in some other sunset photos. 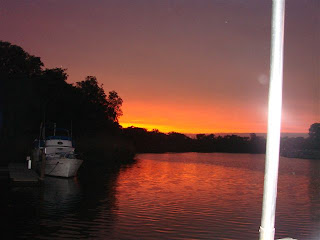 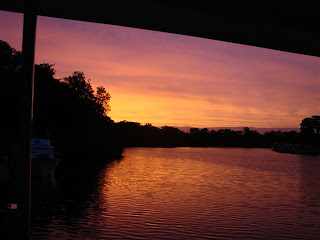 Wow.. SO much to comment on! In no particular order... The sunset pic on the water (I know: it was the grill) was/is exquisite. I've had that "small world" thingie happen to me a few times, as well, and it's *always* unexpected and a joy. The war stories seem to flow like Niagra afterwards. Gators and moccasins, oh my! Ten dollar Bud? Oh, NO! No haircut since '73? My, my! Rasputin's on Telegraph? Oh, YES! And you *know* I'm just skimming the surface.

You have a *good* life, Darryl.

What a great post! Buck sent me, and I'm glad he did! We just got back from our week's vacation in Sarasota... didn't want to come back! Love your pics.... and story, will be back again!

Thanks, Buck indeed, I know that I have a good deal to be thankful for.

Fire Fox; Welcome aboard. Glad to see that I am not the only one celebrating Florida vacations. Great pictures!

To all; I will wrap up the trip on Tuesday's post. Then it will be back to the Big Sailboat Experiences!

As Buck said, so much to comment on - WELL told adventure. And now you must sail forth (hee) on more of them so as to have more fodder for this kind of thing :)! However, the fill in from past I'm looking forward to also.

re underground economy relationship - I do this also and come to find out it is the "new" thing...I am NEVER cutting edge. It works, though! I'm currently trading photgraphy/computer work for wood cutting/splitting and carpentry.