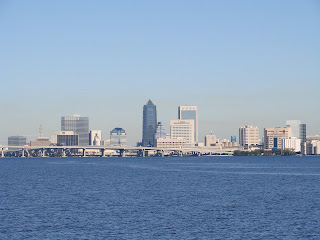 Our guests and the crew of the Barco Sin Vela took a lazy trip to downtown Jax, got bored and went to the Ortega River. Once in the river we turned left and headed towards the Timuquana Bridge, just to see if we could get under it.

Barco's air draft is about 18 feet, and it is a low bridge, so we went real slow and I stopped at the entrance of the crossing. Roger got on the Sundeck roof and watched as we inched up. There are no photo's because I never use a camera when there is any kind of dangerous evolution; Plus, I hate to have evidence of my stupidity which will get passed around by the Spousal Unit. Just to show everyone what an idiot I can be...

We were clear even to the point that the VHF antennas had about two feet clearance and the water was almost at high tide.

Victory! Another water way to be explored more fully. 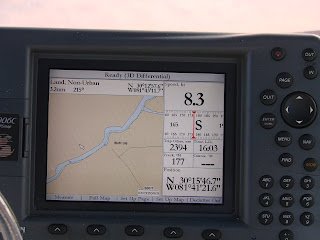 An idea of location on bigger scale:

We are on the lower left corner that is titled "Swamp" 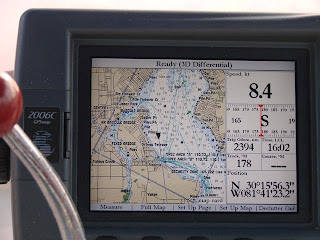 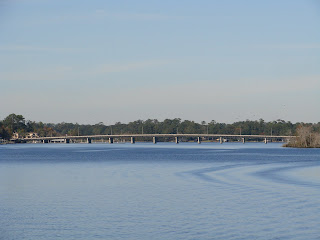 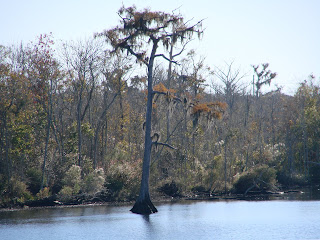 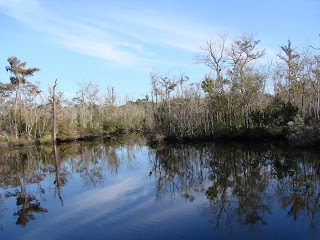 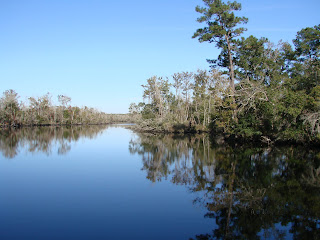 Someone has to call home to Michigan to brag about boating in late November: 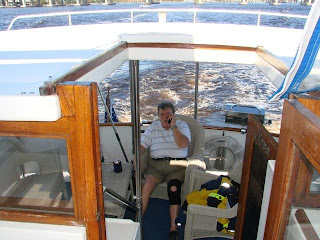 Sometimes, the girls get to drive! 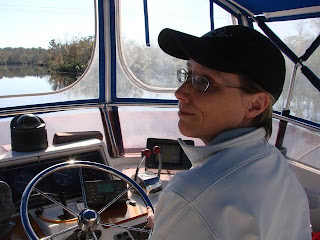 This is really a great waterway, and only about three miles from the house. Timuquana River in distance; 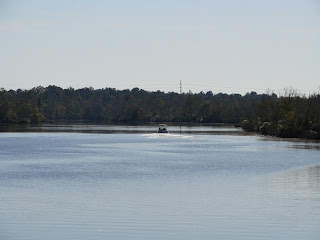 The Naval Air Station is just a quarter mile to east. You wouldn't know it from this view. 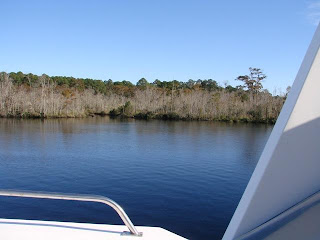 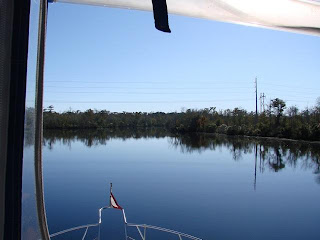 We kept heading South until the river was little more than a 23 foot deep creek; The width being about 45 feet, I was starting to get nervous. The trees were leaning over the water and I wanted to make sure we could turn the boat about 180 degrees and retrace our steps back to the real world.

I made a twenty point turn with the boat remaining in the center, I bumped a few branches, but what the heck. It was a great bit of training and I can't wait to go back and anchor for a night, maybe attempt to slay some fish.

Heading North, we soon were back at the low bridge, we cautiously passed underneath and began to make way for the Ortega River. The water was very shallow and I could see mud in our wake. Once in the Ortega, we waited for the McGirts Railroad Bridge to open (about ten minutes) and were on the right way to cross under the Ortega Bridge returning us to the St Johns River. 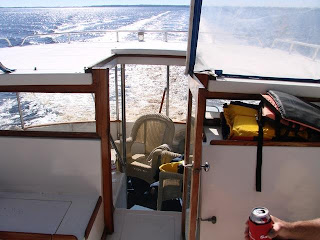 Arriving at the Barco Berth in Pirates Cove, we expertly pulled in and tied up and put away the boat in about five minutes. We have this routine down pat, I tell you. Afterwards it was a visit to the bar where we had a post river debrief before heading home for a great dinner of smoked pork tenderloin with pinot noir.

My life does not suck.

SWWBO trying out the bow with more perspective on the narrow waterway; 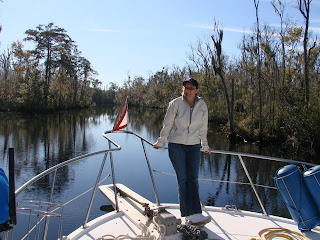 The Secret Chimp doing the driving is watching for branches and maintaining center of creek; 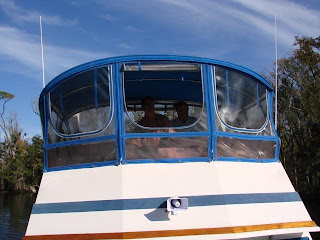 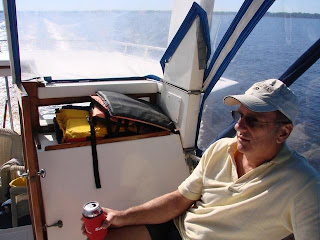 My life does not suck.

You got THAT right. OTOH... I'm sitting here sipping coffee and watching big lazy snow flakes drift down out of a leaden sky. The first snowfall of the year is always cool, and all that frozen white stuff will be gone tomorrow. I can live with that...

Thanks for the response!

Snow can be nice for a day or so, as long as you have sufficient supplies to Ride The Storm Out, like Reo Speed Wagon.

I like the smell of a coal stove heating the room while an unending closet of wine and beer keeps the thirst away!

But Florida kicks ass in wintertime!

I ran across your page searching for a foul weather jacket and noticed the picture of the Deyo at the top..that was my first duty station in the navy were I was a deck seaman brings back alot of great memories.

Thanks for coming by, Brent. I was in the Air Det in 91-92. I lived in OD berthing on the port side bulkhead.

Come on back, anytime!

WONDERFULLL! Your life does not even suck...not a bit...not usually anyway, I hope.

Jihad; My life is good because I live in the South! Gotta love the decent weather.