Getting into the routine of Two on, Four Off. We have left the routine set on Greenwich Mean Time so that the watches occur at same time for circadian rhythm and allows us to maximise rest.

An annoying leak has formed on the starboard side, looks like a stanchion (Lifeline holder) is letting water. The water pools on the countertop over the fridge.

Standing the two hour watch is tough in the middle of the night. You wake up groggy, climb into the still wet foul weather overalls, wrap the jacket on and over the jacket put on the harness.

Walk into the dimly lit cabin (don't wake Richard!), grab a couple apples and a jug of water/lemonade. Climb ladder. Get a sense of Vu ja Day as I rub my eyes and see Chris leaning tiredly over the wheel.

"Anything worth mentioning?" I ask.

"No Skipper, winds are steady, nothing to report." Is the usual reply.

I will heave myself into the cockpit seat, on the port side. I take a moment to let my eyes focus on the outside. The boat rocks from side to side, forward and back with waves crashing on the hull sides. Chris wearily slides right while passing me the bitter end of the harness clip which secures the helmsman into the boat.

The rules are that anyone in the cockpit (especially alone) shall be clipped into the tether. Also, no one leaves the cockpit for any reason at night. Period.

Emergencies will require the helmsman to call for "All Hands on Deck" alert and wait for assistance. Nothing that happens outside will move so quickly that we can't give it a few minutes to react properly.

While steering, the boat moves like a living beast; Forces try to make the stern swing right and left. The helmsman must counter with opposite force on the wheel. A quarter to half turn is constantly required as the boat slides rapidly down a wave. An eagle eye must also be on the red l.e.d. lit compass, to keep the course bouncing between 45° of course. 18.5° on each side of 270°, our prime course.

Numbers are approximate. This is what you would look at on the compass; 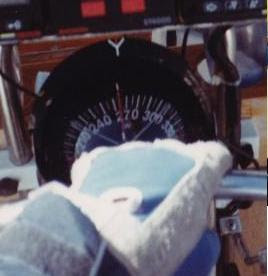 Inside my head was a mix of "what if" questions and Bob Marley music (The album "Kaya").

One cool thing was watching the stars pass over head on clear moments. We were directly under Orion's Belt which you could literally steer by, as it moves inexorably to the Western skies. This would all be a pleasure, except I was scared that some sort of emergency would come next and I would be unable to have a solution, and we would all have to be in a liferaft.

We are now two days into the trip after the sea anchor. I had been relieved from watch and was in bed trying to get some sleep. As I was dozing I got a definite whiff of wires burning. It was not my overactive imagination.

"ALL HANDS; FIRE FIRE FIRE! CLASS CHARLIE ELECTRICAL FIRE IN THE ENGINE ROOM... I AM SECURING ENTIRE ELECTRICAL POWER UNTIL I FIND SOURCE OF FIRE, I HAVE A FIRE EXTINGUISHER IN HAND..."

Always the melodrama queen, I am!

I had everyone up and ready to assist as I secured the two battery switches which controlled all power. I also shut the switches on the breaker panel for good measure.

I could see a wisp of smoke coming out of the bottom of the Newmar Phase Three battery charger (Newly installed in August!)

Seawater from that stanchion leak mentioned earlier had migrated to the charger, got inside and shorted out the electronics. So much for five hundred bucks of gear.

I disconnected the three battery connection leads and taped off the ends. Went back to bed hoping that the worst was over. Slept like a rock!


Spent the next couple days in relative harmony with an unvarying routine of Two on, Four off.

Routine is good!
Posted by Barco Sin Vela II at 9:41 AM

The Barco Crew will watch the routine beat down of the Army Kaydets. I think Navy gets bored with annual football clinic.