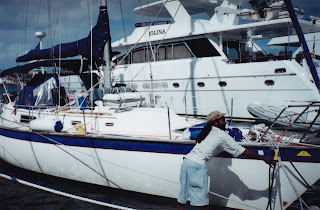 The remaining Wildebeest crew remained in St Lucia, readying the 'Beest for further travel. Rodney Bay Marina is first class in every way, including the costs. It was about $40.00 bucks a day, and after three days of partying we got to work.

Electrical system on the starboard side had completely gone out. We hired an electrician to rewire that side. The Autohelm 4000 which we hoped to use in calm conditions also was falling apart, so we replaced it with a used unit. That battery charger that failed? There goes another $600.!

So far, we had spent about $1250. in repairs and replacements, and that doesn't cover the Marina and the restaurants. Also, we needed courtesy flags and on, and on. This shows that even though we were trying to relax, there was always some work or project to do.

Digression Alert: One thing about St Lucia (And most other Caribbean islands); The begging is rampant. There are no government services other than tax collection and police, so the populace is left with crushing unemployment and inherent racism. The lighter you happen to be, the better your situation job wise. So local citizens walk the docks of the marinas where the wealthy white boat owners happen to be, seeking any kind of honest work; Cleaning your boat, your laundry, homemade flags, foods and drinks and anything else. The desperation is there and they get mad if you don't give them work or money. This is because the developers from the U.S and Europe came in, bought land cheap displacing existing farms and other local infrastructure, built ridiculous resorts, hotels, marinas and shopping centers promising a better life for all the islanders. Then, once the buildings were finished, the developers sold their interests making all the money, left the islanders to their own devices. Only the locals were no longer welcome on those resorts, hotels and Marinas. No wonder the locals hate us and consider us all selfish millionaires.

And me making a princely sum of $1300 a month. Riches if I was living in a tin hut without water or electricity.

So we faced another inner question which kind of loomed ominously, but needed an answer; What is our goal with this cruising thing? Will we drop out of society completely, or will we return home to "normalcy"?

When we arrived in St Lucia, we had about $1500.00 in credit card debt. There was no savings left and I was on half pay. At this current rate we were spending what looked like $2500.00 a month and naturally, this was unsustainable. Maybe if I was a retired officer, we could go on and on (And many retired officers do exactly this) but not as a retired "E".

My proposal to the Spousal Unit was this: Plan A; We can continue as is, have the best time of our lives, keep the spending down as much as we can without compromising quality of life. We can make our way North and pay it all back once we return to work.

Or, Plan B; We can shut down the expense by getting out of St Lucia, find an anchorage somewhere and live as frugally as possible, rice and beans and no Marinas, no bars and stay on our budget.

We pondered this for an evening over cocktails and local foods, paid by credit card.

She Who Will Be Obeyed went for plan A.

While our friends Roger and Graham were in St Lucia, they told us of another friend from London who was nearby, on the island of Bequia, running a 70 foot charter sailboat. 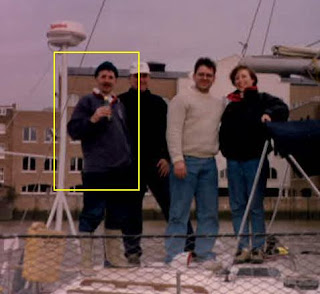 Our friend had lost his wife to his former friend, she stole his kids and kept the family home. So our friend left England and moved to Bequia and start a new life in the palm trees.

We can't have sailed 5000 miles with out seeing our old buddy, could we? Of course not. Our next stop would be Bequia, just a 14 hour sail South of Rodney Bay.

Meanwhile, we thought we would tour the island after we completed our repairs. A cab driver walking on the dock persuaded us to hire him for the day ($80.00!) Here are some photo's of that tour of the entire island:

This is Castries Harbor: 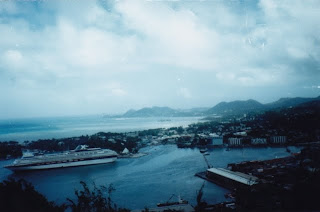 Another Rodney Bay view from the Road: 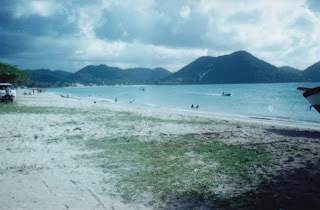 Some folks would call this "quaint", or would gush about the local "Culture". I don't and neither do these nice people doing what they must. Laundry time outside of Castries: 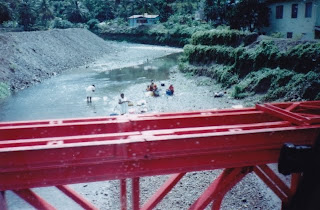 Heading South along the West coastal road, we passed Marigot Harbor. Beautiful little hurricane hole, there are cottages there renting for less than 300 bucks a week: 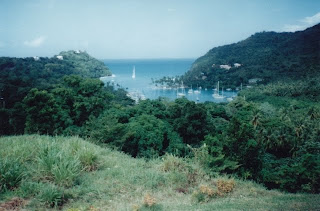 Arriving at Soufriers, you can see the Pitons closely. They look like two bullet shaped breasts rising up off the coast: 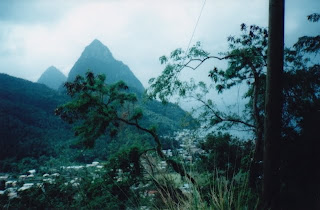 We stopped by a rainforest by the Pitons: 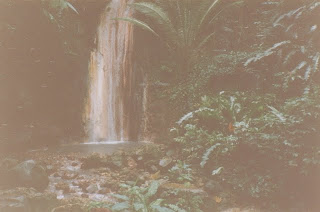 The driver kept stopping for us to get great photos, but he always stopped where there were beggars waiting to approach us to "Help". The driver knew all these folks and was trying to get us to pass some more of our wealth around. I had to explain that our whole budget for the day was going to him and there was no more for the rest of the populace, so if you could, can we just pass the stops, hmmm?

We were brought to the volcano and took the tour. The rocks and the ground were extremely hot and at times you would choke from the sulphur rising in the air. We walked into and around the caldera for a few moments, but I was choking and the stench was overpowering: 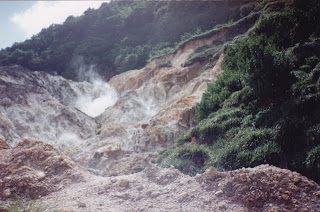 Naturally, when we returned to the van, our driver was more interested in going a bit quicker, since we didn't want to help any of his friends. We whizzed by the airport in the south island (A former U.S. Naval Airstation) and headed up the eastern coast, which is the windward side. It also started to rain. 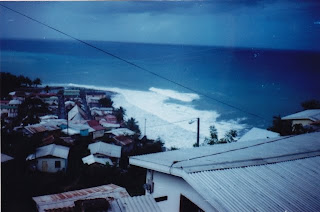 We literally circled the island in about three or four hours and we were dropped off at the marina by the nice driver. We were glad to have had the chance to see the countryside, but it pretty much wrapped up St Lucia for us.

There were a couple boats planning to leave like we were, so we thought we would go by and see how the planning was done on other boats. One boat, a 47 foot Sparkman Stevens had a crew of two, both were professors at UC Berkeley, tenured, so they were traveling on full pay. Their boat was beautiful, and we thought they were long distance sailors who had cruised to St Lucia after a Panama Canal passage.

They bought their boat in Tampa and hired a professional skipper to help them sail from Florida to the Virgin Islands. They complained that he was a "horrible alcoholic" (Whatever that is, I was chugging my third beer by this point) and they whined about what a tough passage it was doing the so-called "Thorny Path" to the Caribbean. We clucked comforting "Gee, I feel your pain... noises" while thinking of the ups and downs of 23 days in the Altantic. The "Thorny Path" has a boat island hopping (Day Cruising, no overnight passages) from Florida to the Bahamas, to Dominican Republic, Puerto Rico and finally the Virgin Islands. Afterwards, the winds are not on the nose the whole way, but rather off to the left.

The professors were wonderful hosts and we watched them plan the trip with engineering precision; They turned on the weather fax and the Single Side band, called "Herb" in Canada (by the way, Herb ROCKS! He does weather reporting for sailboaters in the Atlantic at no charge, God Bless him!)And chatted with other cruisers on the radio getting advice and commentary from boaters in the region.

When we left the professors doing their "thing" the Spouse and I shared a deep laugh about what Noob's these two were. We were sailing a hundred miles, not launching the freaking shuttle! (Not trying to be a snob, but sometime a boat will find itself on an overnight passage! Otherwise, just take an airplane to the islands and stay in a hotel)

We made our waypoint entries into the GPS, reviewed the weather at the internet cafe and bedded down for a 0430 departure.
Posted by Barco Sin Vela II at 5:43 AM

re: Plan A/Plan B. I faced a similar decision when I ran away from home in the RV, what with my expenses exceeding my income by about a grand per month. I, too, went with Plan A... but I had a 401(k) to pick up the slack. I hit that sucker Big Time until Social Security kicked in. No regrets, either!

The good Cap'n did, indeed.
re: Plan A/B or even "Plan 9"... If someone knew the actual date of their upcoming demise, the plan would be to run everything up to maximum indebtedness and leave the problem to the bank to solve!