The Weather is here, I wish you were beautiful

The Skies are so clear, but don't run away...

Line from a Jimmy Buffet song from 1979.

The skies were indeed clear, the weather was getting warmer and there was no need to wear foul weather gear in the afternoons. Night was a time for squalls, which could turn a nice evening into a roller coaster for about 15 minutes at a time.

I would come on to the 0300 watch and see the clouds looming ominously and all I could do was hang on for the sleigh ride. Winds would pick up to as much as 40 knots and rain would completely blind me except for the damn compass.

It didn't care, the LED lights would glare brightly as the heading needle would bounce about as I struggled to keep her on course.

As you can see from the map, we were a little over half way (although if you click on the map and embiggen, you can see the entire journey) each pin on the map represents the 1200 position of each day.

Monotony is a good thing, as long as the entire crew tries to keep course (You can clearly see the variations) and we keep to the safety plan.

That pesky leak was still dumping water onboard, the starboard side was completely soaked. Good thing nobody slept on that side, they'd get a head full of water!

The water was kept at bay by leaving towels on the countertops to soak up the water. The electrical system was getting sluggish, no doubt from water soaking the wires. Both heads and the stove system were affected, and the forward head light took a few seconds to start.

The Spousal Unit and myself had a little chat about this and decided that there were no Marina's with repair facilities at Barbados, we would have to anchor offshore. Wildebeest needed a yard period after this journey. I had sailed to Rodney Bay before, back in '94 when I chartered a 39 foot Beneteau. I was weakly familiar with the harbor and knew that there were fabulous facilities where we could get anything done to repair the Wildebeest. 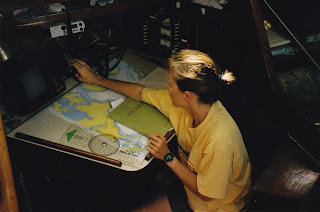 The decision was made to change destination in less time than it took to type this. We reported our decision to Richard and Chris, and naturally they reacted in a not so nice way.

They had not been consulted on this plan change, naturally, they felt slighted.

"Tough. We are going to St Lucia because we can dock properly for repairs.
It can't be helped..."

Comments;
Big squalls since 0530, had one with winds in excess of 42 knots for ten minutes.

I came on watch about 2300 and asked if there was anything going on, Chris just mumbled, "nothing", and I snapped myself to the boat and slid behind while grabbing the living wheel.

First thing I notice was that the boat seemed sluggish, handled like it was being held down. Chris was stopped before heading below for his nap, "Take the wheel, the boat seems heavy and I want to see why..."

I went below and went forward, opened up the floor boards in the guest cabin.

Water sloshing around. I reached in and closed off the seacocks which supplied water to the head and enabled drainage.

Walked swiftly back to the engine room; Sure enough, water back up to near previous record levels. A quick look to the electrical panel showed the bilge pump switch "Off", so I switched to "On".

Reminds me (and probably ewe!) of another time back in Biscay, hmmm?

I woke up Spousal Unit, told Chris to stay on the helm as I had other matters to quickly attend to.

In the middle of the night. A bumpy night.

Pulled the Four Delta battery out, slid it over to towards the chart table. My favorite girlfriend held the handle to keep the battery from smacking me in the head while I was reaching into the bilge for the pump. I am liberally cussing and cursing as I cut, clean and retrieve the errant pump.

I seriously considered pulling Richard out of his bunk and making him fix the pump, after I slap some respect into him. Instead I told him to do something anatomically impossible. Having this new event unfold was not what I needed. I wanted quiet routine, not repairs. My patience and demeanor was near the "Freaking Out" level of care.

Chris was doing as best as he could to try to keep Wildebeest from rocking too much, but he had been on watch for over three hours, so I couldn't get too mad at him. I just pushed on with the rebuild and reinstalled the pump. Then I pulled it out again to repeat the whole crazy scene. Next time I will have two spare pumps at the ready. Remove and replace. Rebuild at leisure, right?

The pump worked after the second rebuild and I was completely shot, and not a little seasick. Chris told me to go below and forget the last hour of my watch. I mentioned my gratitude to him for being part of the team, unlike another person. Snarl.

Richard had to get up for his watch in an hour, so I guessed we were even.

The water was soon pumped out and we went back to normal watches, and I got an extra hour of rest.

About 1245 on the next afternoon, I was running the motor for battery charging. We had just finished lunch when I noticed a little change in the quality of the 2000 Rpm diesel sound. I shut down the motor because I knew it was a broken fanbelt.

Located the spare in minutes and I asked Richard to replace the belt. Ten minutes later, I did not hear sounds of a triumphal completion of that small task; SO I passed control over to Chris and went in the engine compartment.

Scene of the belt failure and repair; 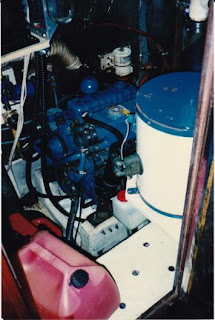 "One does, when he wants to get the motor running asap". I snidely replied.

The Wildebeest crew was getting a little testy in relations with the Skipper and his Boss. This had been building little by little until we were practically not on speaking terms. The Skipper was not helping things by responding in kind.

Can you tell it wasn't me that took this photo? 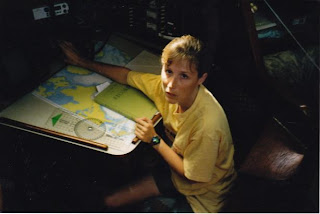 I had heard of this kind of thing happening on other boats, but surely not to us with friends we had known for over three years!

I tried to be conciliatory, but there were some tensions in the air and they were not going away soon. That itinerary change was a big part of the resentment, I could understand it, and I tried to patch things up.

One morning, I could hear the winches tightening up the headsail, I came up on deck wanting a fight because I did not want the sail abused any further.

"Do you need any help up here?" I yelled at Chris and Richard... "because it sounds like you aren't handling the winds too well!"

This is where Chris angrily replied, "You can bloody well handle this yourself! I've had it!"

Well. That told me! I could not have a mutiny on my hands, nor could I just walk away from a challenge to my authority. I yelled back a warning and went back to bed, this was not over but I was not going to lose any sleep on this.

There was a crew meeting at 1200 where we aired out all grievances, I took my criticisms, but not too personally. I gave back my concerns and we agreed to disagree, but we all pledged our intention to get through the next few days with all of us being as civil to each other as possible.

This is what happens when you have an extraordinary voyage in tough conditions, all with a crew who had never sailed out of sight of land, ever. Also, the Crew had a valid point, I wasn't communicating anything with them, since I was trying to hide my own self doubt and apprehension.

(Note: I have read through this at least three times and had the Spousal Unit review it. I want to be precise about the times and people and do not wish to badmouth anyone unnecessarily; We were all involved in a very stressful three weeks and nerves were on edge. The Spouse and Myself are still friends with our crew, and any misunderstandings of the time are definitely water under a far away bridge. My apologies to all for bringing up a description of tense moments. I would do many things differently and better with the help of experience and hindsight.)

Two rules that a Captain needs to know about sailing long distance;

2. Other than big physical damage and life threatening events; it's ALL small stuff.

Weather is getting warmer! 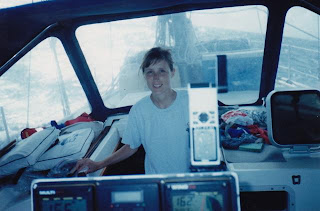 During the last few days, the temperatures were really getting warm and a sense of expectation was building. I was listening to Radio St Lucia on my shortwave. I was concerned when public service announcements were repeated that, "January is Leprosy Awareness Month...". 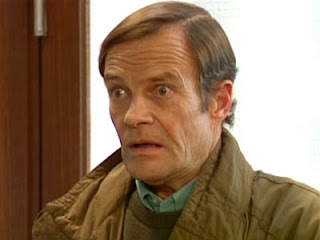 (Photo stolen from "Keeping Up With Appearances" Show website)

Heh. One of the very first things The Second Mrs. Pennington told me about her philosophy on life was to take extreme care in choosing your travel partners. She was wise beyond her years at the time, being only 19 years of age. Now why did that particular thought leap into my head? ;-)

This trip would really have been more of a piece of cake had I done a ocean crossing before. I let the crew have more influence on me than necessary and it caused indecision. Won't happen again.

I would do this trip with those guys again, and it would be much more pleasant.