What does a person do when bored? 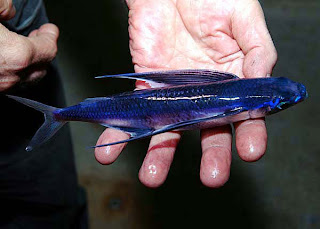 I stole that great picture from here.

Learn how to play cribbage.

One thing we did as a crew was try to come up with the longest sentence (extemporaneously. of course) describing the actions of flying fish, with particular regard to using words that started with the "eff" sound;

We did this for hours. Especially when a "flock of free flying fish freaked from fleeing, flop furiously, floundering fuzzily, finely feeding ferocious feeders.. "

You get the picture.

We were within a day or two of St Lucia, there was still enough of the journey left to mess up, so I was on pins and needles, waiting for the next foul up!

I had the Bob Marley playing on the boom box and we were all getting the island fever. The winds were still a bit strong, but knowing we were down to the last 48 hours made all of our spirits light.

There was a lively discussion between Richard and the Spousal Unit about the pro's and con's of night and day island arrivals. Richard was particularly concerned with the possible effects of coral reefs.

St Lucia is a volcanic island, literally a cone-shaped mountain rising out of the water; The water is deep all the way to near shore. (I was grateful for this because I was going to pull into port whenever we happened to arrive!)

About 1600, late afternoon, we could see the islands of St Lucia and Martinique. We still had another thirty miles to go, but boy did we have a major case of channel fever!!!

The adrenaline was building up (The same feeling when you were five years old on Christmas morning, waiting for Mom and Dad to get out of bed) and I could not get any sleep in between the last few watches. We got between Martinique and St Lucia and felt the effect of both land masses, the seas were a little more confused so I took the helm as we made the last three waypoints.

We all felt like a graduation ceremony was at hand as we changed course to South and then East-Southeast and entered Rodney Bay. I dodged a couple of anchored, unlit sailboats and all hands were on deck to help with visual navigation, looking for buoys and other Navigation Aids. Entered the little cut into the Marina itself, only seven years since my last visit as a Sailor on a chartered sailing boat. It was 0215 Local and it was the best night of my life! 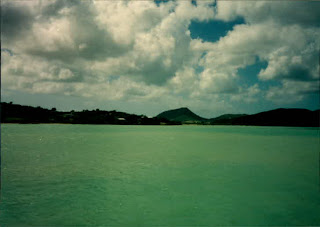 We searched nervously for an open berth, noticed a couple boats that we knew from London and a few other ports of call we had made over the previous five months. An open dock was spotted and I pulled in. We all excitedly tied up and I secured the motor ending 3100 miles of sailing.

I hopped on shore with wobbly sea legs and looked for the Customs or Marina office. I found it, but no one was home. Found the head, instead (Poet, but don't know it) and decided to make a comfortable, land style head call.

Back aboard, we had a dilemma; When a boat makes landfall, only the Skipper may disembark and conduct business. (I already did... heh heh) But I could tell that no one would be at the marina until another four hours passed. I made the decision to allow all hands to go ashore and use the facilities. Showers, head calls, all that. We issued brand new T-shirts to our crew (They had no clean clothes, neither did we!) so that everyone would look and smell sharp for our arrival picture.

An instruction was passed to all hands; "No one shall leave the Wildebeest until a complete field day had been completed, including all personal areas, heads, lockers... everything was spotless."

Then we broke out a bottle of Mumm's Champagne to toast the completion of Atlantic Crossing 1999-2000, Wildebeest III. 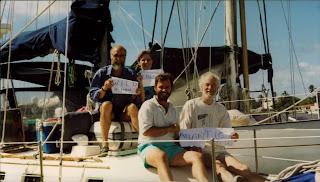 OK... a re-run of my comment above: very, very cool. No two ways about it!