Riding on the sea anchor is not the easiest thing to do. The boat groans and stretches twisting to the forces of the ocean on the hull. Three on and six off has done wonders for the rest and rejuvenation of the crew. I set quietly in the back bedroom listening to the various sounds. I worry, constantly.

Imagine your self at a beach, only you are in the surf and can't touch bottom. That is how it feels.

About 1300, I went forward to repair the Roller Furler that was broken the night before. I brought all the tools I could think of (of course, I had to go back at least three times to get the right tools!)

I cautiously crawl up to the roller furler, which is hard mounted to the forward most portion of the boat. Pointed directly into the approaching waves. I can't kneel there because the angles are too extreme for placing my hands and tools in the fittings. This means I must sit closely to the hub. My feet necessarily dangle off the front of the boat into the air/water interface.

The Wildebeest was hobby horsing, with us pointing about 30 degrees downward, feet touching water, than lifting up to about another 30 degrees up. Call it an altitude change of about twelve feet down, an elevator ride up about 15 feet, then down again.

"Hand me a allen wrench."

"Pass me the half inch."

Here is the entire assembly: 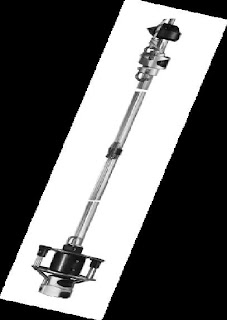 The head sail wraps around the foil above the drum. The drum is rotated by a winding line that spools and unspools around the drum. Our problem was that the line pulled out of the drum, and I have to take the drum apart (while moving up and down, rapidly) and not lose any parts.

A line drawing of the Drum: 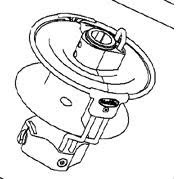 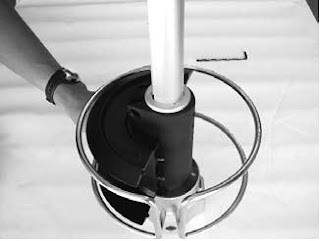 This is where I need to replace the line. So I took the OLD line and stuck it in the hole, tied it and put the assembly back together. Sounds very simple and when at a dock, it is.

I had to manually wrap the line around and around, since the sail was still bent on the furler. This took another 20 minutes, but progress was being made.

The sun was shining bright and it seemed that the winds were even coming down from a howl.

The world seemed to be going sorta my way, and I went below to get some rest after putting away the tools.

The boat continued stressing and straining to the sea anchor. After about an hour, I heard a snap and a banging on the stern; The swim platform decided to say "heck with it" and broke in two!

We couldn't just ignore it and let this go, since we now had teak banging the fiberglass hull and would soon put a hole which would let in water. Better move fast!

So I grabbed a bag of tools and walked back to the stern. I needed to use a sling and lower myself to the level of the two connection points. I had a helicopter gunners belt around my chest with the bitter end secured to the boat and held/adjusted by Richard and Chris.

The tools needed were 7/8ths, half inch and vise grips. Really, I needed three hands but two would have to do. I dropped one wrench into the ocean, so there was a scramble for a replacement. Finally, I took off the upper and lower brackets and I let the teak platform go to the sea. (Hindsight: I should have tied a line to the platform and secured it onboard. I thought of that just as I saw it floating away...)

This is the platform; You can see the hardware fittings that needed to be removed on four points. I was hanging by my toenails! 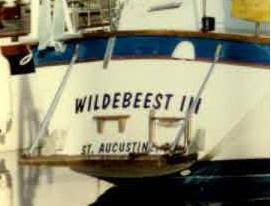 I was so relieved for having crossed off another emergent task that I climbed back aboard and headed back to bed. Whew!

Dinner was served about 1800, and a nervous but rested crew maintained our sea anchor watch.

Richard T. is in a bunk with chest pains. Color is good, pulse 60 temp 36C. Giving fluids orally will check vitals again at 0630.

The door on my cabin erupted with a knock at about 0550. My snooze was interrupted by Chris saying, "Skipper, we need you on deck... Medical Emergency, Richard is possibly having a heart attack. Please come, we need to get him below..."

This can't be happening. The Spousal Unit hurries out of the cabin while I put on my foul weather gear (Which I just took off an hour ago...) to go help Richard.

We found Richard slumped over by the helm and looking quite ill. The Spousal Unit pulled out her Ships Medical book while Chris and I pulled Richard to the hatchway and attempted to maneuver him down the ladder. He was made comfortable on the cabin settee while his vitals were being checked.

Chris offers this, "Skipper, we may need to consider turning to the Cape Verde Islands, so we can get medical help."

"Let's just wait until we can identify what is going on... please take the anchor watch while we do this."

Richard seemed to be a little weak, so I gave him liter of orange juice, opened it and told him to drink it.

I asked him what was the last thing he had eaten.

I asked how much water he had consumed?

"Just this," as he shows me a liter plastic bottle.

This is where the frustration I had simmering came forth in a massive ass-chewing of our crew.

Richard had not eaten enough nor drank enough liquids! The boat was flush with food and drink and these two guys couldn't think to ask or take what they needed!

What the situation had been that the crew would not get any food unless we served it. Since I had snarled about them cooking food the other day, they took that as don't eat anything unless they had permission.

There needed to be a clarification. I showed them how to open a can of beans, and showed them that you could eat canned food without cooking it first. Then I explained the dangers of dehydration, how we all need at least three liters a day of water and we needed to drink a liter per watch.

"Further more, if you are hungry, eat! If you cook, make enough for everyone!

"Finally," I pointed out, "that we were NOT going to Cape Verde. Put that out of your minds, now. We were all going to Barbados, and if anyone dies, I will strap their dead asses to the mast to show the authorities!"

It seems that the crew were kind of hoping we would pull into the nearest islands where they could bail out and leave us hanging. Heh!

We made a really nice breakfast for everyone and made some apologies for the cruise being a bit more interesting than we intended. I let the crew sleep for the next four hours while I came up with our new plan;

1. The Wildebeest is at a turning point; We are in trouble and we need to get moving.

We checked the charts and saw there was two more weeks to go. The winds were now about 20-24 knots, the skies were clear and we better pull up the anchor (if possible) and go.

2. The Watch system is unsatisfactory and is fatiguing crew.

I made the decision that we would go to a Two on Four off rotation, 24-7. This would leave one person free for cooking duties and navigation. The two person watch would be superseded by single manning.

3. The Crew shall understand that we want their time onboard to be as pleasant as possible, please alert the skipper to ANY needs or desires.

There's no reason for anyone to go hungry or thirsty. This ain't a life raft.

At 1030, we roused the crew to get underway. I stationed Richard and Chris up front to pull in the anchor line, the motor was started and we moved forward slowly as the slack was picked up. There was 400 feet of line so the going was slow.

There was a large red float attached to the canopy of the chute, so we weren't in danger of watching the chute sinking as pressure was taken off.

We finally got to the chain and I maneuvered the boat to the trip float which collapsed the canopy. I went forward to help manhandle the chain aboard while the Spousal Unit did fine tuning on the boat handling. At 1100 we stuffed the chute in the yellow bag, wrapped the chain and anchor rode into the big sail bag and we had our sea anchor ready to be deployed at a moments notice!

Secured the assembly in back and turned the boat to a course of 270 degrees magnetic, and let out the headsail, only allowing half of the sail out so we had a reduced sail area which translated into an easier to handle boat.

Sea Anchor in and ready to deploy. Underway for Barbados. Winds and seas have calmed considerably. Still a bit bumpy.
Posted by Barco Sin Vela II at 6:01 AM

OK... I know you've said things appear much worse than they were, yet still. The fact remains that I... speaking only of me, personally... would NEVER attempt anything like this. Evah. You have my most sincere admiration.

Thanks for the compliment, Buck.

The sailing is not difficult, and with the right people it can be a breeze... er, good.

We have two weeks left and only a minimum of trouble, I promise!