Underway in the Atlantic: Day Two thru Four 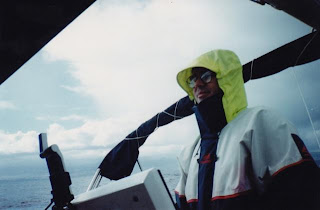 Comments: Clouds breaking up Gran Canaria is disappearing. Full moon making visibility better. Worst wind gust up to 34 Kts, hdg changed to 180*Mag to avoid storms at 0800.
We were on a four hour rotation, as mentioned before. The Spousal Unit and myself stood the 2000-2400, 0400-0800, 1200-1600. Four hours in between standing at the helm, and Richard/Chris watch did not cook or navigate. We carried quite the load when you think about the rocking and rolling, and add that to housekeeping it meant I was getting plenty tired.

Our crew was tired, too. After you got off watch you had four hours off to catch sleep, make head calls and eat. Not much time, especially when you add in the noise and fatigue that might make it tough to get to sleep in the first place.

Heh. The winds were already from an easterly direction, I just could not recognize a "Tradewind" if it was carrying a sign.

The Wildebeest kept plowing along, just a headsail up due to changing winds; I did not want a surprise jibe which could do damage to the standing rig, so I had minimum sail. No problems, we were doing about 5.5 knots and heading South/South West.

By midnight, we had settled into a southwesterly direction and the winds were steady from the East, and we were comfortably moving along, changing watches every four hours.

Comments; Need to check if Wind Hunter is actually generating electricity (Ignored)
Winds have increased over night to steady 25 knots gusting 28-30, seas have increased in size commensurate with winds.

The seas were making us bounce around and there was no way I had the energy or inclination to review whether the stupid %^&* Windhunter made any electricity. I only know that it was howling like a banshee as the boat went up and screamed down the swells. It was almost like the Wildebeest was screaming out of fear as we climbed and dove in the troughs of the swells!

But the one benefit of having the turbine towing behind was that it slowed the boat down when we were cresting a wave and began a speedy descent into the trough. If you let the boat do what it wanted, it would default to a sideways condition which would mean a condition known as a "Knock Down" where the boat is slammed on its side with the mast hitting the water, naturally another wave swamps the vessel and you are now in extremis. Extremis being in peril of losing mast and possibly flipping over.

The towed turbine was helping us stay straight and slow. Good thing, particularly when you are tired. The racket it made as it spun was scary, though.

During the day, the pace was a little more calm, though still a bit brisk compared with Coastal Europe. We were off the coast of Western Sahara (Currently a part of Morocco), about 75 miles and I was waiting for those trade winds.

Here is the first of many "Flying Fish Fatalities" we encountered. 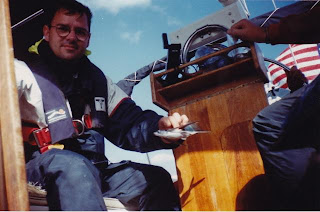 I remain amazed. And much more than amused... this is a compelling read, Darryl.

THanks, Buck. Your words mean much, to me. I feel like I am reliving all this but without worrying how it ends!

No extremis for me...