Kinji ShibuyaPassed away around the beginning of the month. 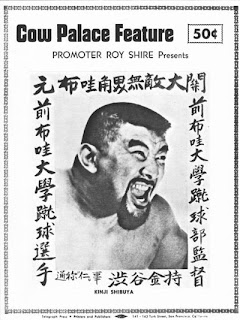 Kenji Shibuya (Shibuya family) ( CONTRIBUTED PHOTO )From San Jose Mercury
Growing up in the San Francisco Bay Area, young kids like me were glued to the T.V. on Saturday afternoon's watching the local variant of the so called Big Time Wrestling. There were heroes and villains and none more frightening than Kinji Shibuya.
When I was very young, like maybe eight, my father would joke with me about some of these wrestlers (He sold Ciclon Negro a Life Insurance policy, he always knew everyone famous, it seemed!)He would say something like, "Watch out, Kinji Shibuya and Mitsu Arakawa might pull a sneak attack on you!"
With a cool name like Kinji Shibuya, you should expect something exciting, right? Anyway, there were the villains like Mr. Saito, Mr Fuji,  Gerhardt Kaiser and the Von Brauner's (The obligatory Nazi's), Pat Patterson, (A Good Guy), Ray Stevens (Not a good guy), and others like Pepper Martin, Pepper Gomez, and the memorable Moon Dog Mayne. As a kid, it was real theater and we believed the characters and the roles they played.

As a so-called adult, I have read that after a brutal match in which blood may have been drawn, these guys would ride off in their car-pools to go have a sandwich and a beer and laugh about the evening.
If you read the linked article, look down in the comments; Some person using Slogun as their handle said, "Careful now, this could be a trick! You never want to turn your back on Kinji Shibuya!"
That is probably the best way to remember a great entertainer.


Break-Break
Ronnie James Dio made the transition from life to the next stage over the weekend. I was a fan back in the 80's of his musical talents and distinctive singing voice. At first I worried about the subjective matter of his music, but it really was all about good versus evil and the music was some stirring stuff. Later on, when his albums weren't selling so much, RJD would show his sense of humor by appearing on Pat Boone's album, "No More Mr. Nice Guy". I own a copy!

I will have to play a couple of his CD's this week, if just to annoy the Spousal Unit. She was forced to watch the film, "Rock and Roll High School" last night, so I am treading on some musical thin ice.

I wonder who will be next, since the famous seem to prefer departing in threes? Hopefully no one that is close to you...

I remember several of those wrestlers and also one named Killer Kowalski. When I was a kid, I cheered for the heroes and booed the bad guys too. Then as I got a bit older, I thought it would be more fun to be a bad guy wrestler than it would be to be the good guy. The bad guys just seemed to enjoy their work more.

"The bad guys just seemed to enjoy their work more."

I agree. It seemed to keep the fan's interest, too.

Shibuya and Kowalski had a successful career as a Tag Team.

All in great fun. Today's wrestling is much more cynical.

With a cool name like Kinji Shibuya, you should expect something exciting, right?

I gotta agree, based ONLY on the name and speaking as someone who spent many a debauched night in Shibuya. In Former Happy Days.

Wrestling is about as familiar to me as particle physics, only slightly less so. ;-)

Got distracted and forgot to mention you're the SECOND guy I've read today who mentioned RJD's passing. And it's very early for me, too.

I remember them well! My brother and I always got yelled at by my Dad for wrestling while watching wrestling on our black and white Zenith TV! Do you remember Bear Cat Wright? I loved that guy and Pepper Gomez! I sure remember hating Ray Stevens! Sorry to hear about Kinji...he was a true bad ass!!! I bet you watched roller derby back in the day too! Loved those Bay Area Bombers!!!

We watched Roller Derby on Channel 2 and I even made one of the Oakland Coliseum events.

Got one for ya Gene; Joanie Weston lived about a hundred yards away, around the corner! She had a pair of Corvette's one I think was a '53 and the other maybe a '59. Joanie was real nice to us neighborhood kids and always had a moment to chat with us.

Hayward was a great town to live in in the early 70's.