I have been wondering if there has been some questions about the three boats recognizable on this blog. Up on top and at the bottom, The Mighty Wildebeest III. We lived onboard her in Europe and Florida from 1996 through 2004, when we sold her due to living in Fort Liquordale.

Lauderdale has too many bridges on the Intracoastal, so it would take us about two hours from our berth in Coral Ridge to the Ocean.

So we acquired a Marine Trader Sundeck 40 called Barco Sin Vela in January 2004. One thing we liked was that the Barco could get under bridges. Going ten knots was a bonus, too.

We frolicked in the Southern Florida waters, making regular stops in Biscayne Bay and Elliott Key. Always in the company of our Boy Cat, Mao.

Him cries when there are no humans to serve him, and cats were a no-no at the Condominium we lived. We did not want to be ejected for not following rules, so we brought the kitty. 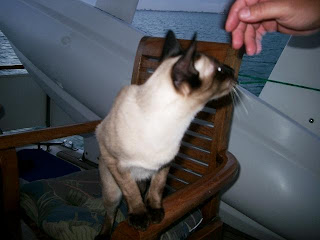 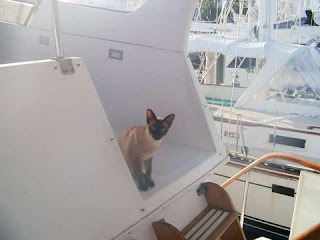 About November of 2004 we got notice that we had to move back to Jacksonville. We gathered our gear and Spousal Unit's father (The one who is very afraid of water and boats...) put him in a life jacket and we departed at midnight for Jax. It was a beautiful three night transit to Jacksonville via the Intracoastal waterway.

I know every inch of the waterway from Jacksonville to Key Largo. Did it four times. 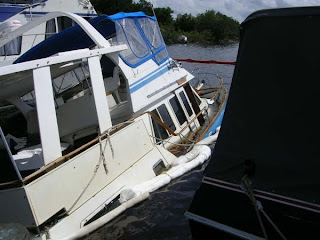 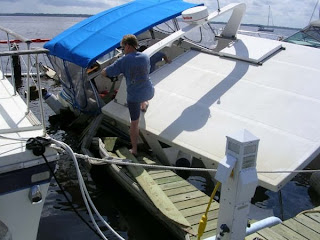 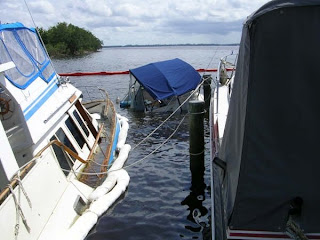 The guy stepping on the sunk Barco is the owner of the little boat in front of our trawler, his boat broke free of a mooring and took out about a half million worth of boats.

Our insurance paid for our totaled boat and we acquired the Barco Sin Vela II, a Nova Heritage East Sundeck Trawler. As seen below.

You could say that the Barco Crew was Indemnified. (When will I ever use that word again?)

Entirely too much fun is being had. Always; Look out for Number One and don't step on Number Two!
Posted by Barco Sin Vela II at 11:15 AM

Did the guy in the little boat have insurance or was he from Mexico? I'm sure that my tax dollars will help insure him in the future if he is a recent arrival from the Rio Grande.

Not from south of any border. Just an underinsured civil servant. He only had 100K in liability coverage, he wiped out a half million dollar boat on the way to sinking us.

Aiiieee. The sinking of Barco I must have been a Black Day, indeed. I can only imagine...