25-60 Multiviscosity oil, that is. From the fine people of Phillips Petroleum, poured by hand into a large funnel.

I was standing on the foothold on the port side of the engine, balancing on the wing root and pouring oil into the engine sump. The crew chief was servicing the brake system by bleeding and adding more hydraulic fluid. Bob supervised with coffee in hand as we moved quickly through the paces. After I was finished, I picked up the empties and gathered rags. I placed some spares into the gunner turret space and we locked up. "Pacific Princess" shall fly on Sunday, sometime around 1100. Afterwards we will burn meat on a grill celebrating the launch and return to flight of the Avenger.

There was a shirt waiting for me, I guess I am considered a small part of the crew. Cool! 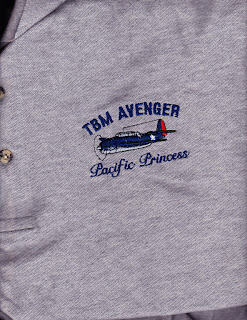 VERY cool shirt. You earned it.

The shirt is a bit big, I will try to grow into it!