Saturday was UGG-Leee and wet.

Cloudy with 30 percent chance of rain...


Indeed. We arrived at Barco at 0730 carrying sandwiches and ice. Phil scurried about releasing docklines while I unplugged the cables and fired up the Perkins 200's. All systems were 'go' as we backed out of our berth in Pirate's Cove. The Spousal Unit was set in a chair watching the stern of the boat and she gave the alarm as I closed in on a large log in the middle of the fairway. Quickly, I changed the direction of the propellers and moved forward, out and away from the hazard.

Phil moved quickly to pull up inflated fenders and secure all loose lines. There was a bit of sunshine peeking through the dense rain clouds. I called "Moondancer" on the VHF radio and we discussed meeting up by Kyser Point and forming a parade line into NAS Jax. I then received a cell phone call reiterating our plans from Moondancer's Spouse (Tina), who was unaware of the radio conversation.

About thirty minutes later we rendezvoused with "Moondancer" and the appropriately named "Warrior" off of the Kyser Point on the Northeast part of the Naval Air Station. A sailboat also approached, but I did not know who they were. Everyone's welcome to join us!

About then we saw the black storm clouds gathering over the Buckman Bridge, three miles away. And the rain began, obscuring Interstate 295 and the areas around the bridge. Navy Jax Yacht Club called on the VHF and asked us to stand off the end of the runways and wait for the heaviest weather to clear.

Heh. Like we could be anywhere else at that moment!

We started to drive our boats in a racetrack pattern to maintain space between and yet keep our boats in visual distance.

About 200 yards to our East, cruising slowly in the St Johns River Channel was three kayakers, accompanied by a North Florida Cruising Club sailboat and three open power boats formed up around the slow-moving rowers. We stayed as clear as we could while minding our wakes. It would not do to swamp the little boats out of carelessness, would it?

After 45 minutes of pacing about in the strengthening rain, I called the three boats with us and began briefing our method to approach the fuel dock, in the windy rain, located between two other heavily damaged wooden structures at the Marina. I went in first (Since I know the Mulberry Cove Marina best!) and checked the condition and direction of the river flow. I called "Moondancer" to begin making a slow approach to the Fuel Dock and I recommended that they go in Starboard side to. There were four brave and wet souls standing on the dock to receive docklines and assist the Wounded Warrior Passengers onto the vessels.

I kept the Barco doing a short orbit around the moored vessels in the area and I asked "Warrior" and sailboat "Ruack" to stand off and orbit slowly outside the mooring field.

After waiting about 30 minutes, "Moondancer" was finally off the dock with around twenty passengers, including a number of children. The Hatteras 52 headed North in heavy rain for Downtown Jacksonville...

I called "Warrior" and directed them into the Fuel Dock as number two, and alerted Sailboat "Ruack" to stand by as number three.

The rain let up slightly as the passengers alighted "Warrior". "Warrior" had some nice plastic windows and coverings, so once onboard, the passengers were warm and dry. Same for "Moondancer". I was wondering how the guests would fare on "Ruack", being a sailboat with smaller acommodations.

The "Barco" was completely saturated with rain, the water was coming straight through the flybridge bimini cover and dripping on to the miserable Crew. We continued to monitor the fuel dock, ready to jump into action if there was any mishaps. Our bimini and plastic coverings need replacing and now is not the time to notice this salient fact! I hate being wet...

"Warrior" was soon underway and we watched "Ruack" make its approach, just as the rain intensified.

After twenty more agonizingly wet minutes, we were cleared in. By that time, some of the guests had clearly decided to not endure the bad weather so there was only one last couple to take onboard Barco. I was disappointed, but they came for a show and our guests were going to have a show!

Our guests were placed into safe and almost dry seats as we tossed the lines ashore and started to leave the Marina. The other boats had an hour head start and the weather looked quite crappy to the North...

As always, click the photo to enlarge for easier viewing: I said, "Do you guys mind if we head for better weather? "I know you were told it was a downtown cruise, but this weather sucks and I would rather you were dry and comfortable!" 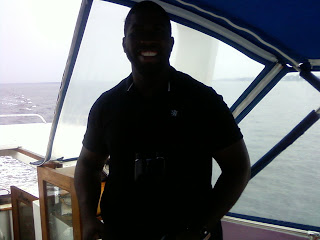 Durant, our veteran guest said, "No, we don't mind... this is great, thanks for having us on your boat!"

I'm sure there were at least six people on the dock who gasped as we turned the Barco towards the now clearing Southern sky at 10 knots! And that's with our radio turned low, since I was not in any mood to explain diverting from the established plan. Besides, I'm the Captain out here!


The boating brief was given to our passengers as we approached the Buckman Bridge, I explained the life preservers, what we would do if any sinking danger (Run the boat up on shore, failing that, the boat can sink and we would stand on the sundeck cover and await rescue...) and finally how they were welcome to any kind of snacks and beverages. Sodas and water in the cooler right there, beer and more sodas in the fridge down below. 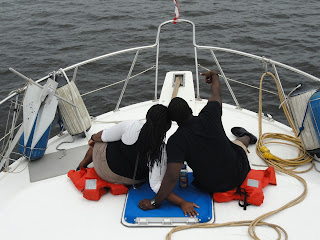 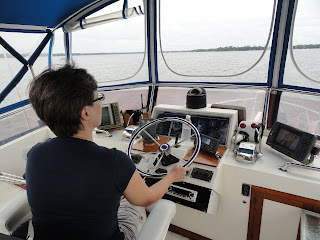 The next hour and a half were spent talking about service, getting to know our young couple. They talked about going camping with their church and how they love the outdoors.

The "Barco" headed for Doctors Lake. The air was warming and also quite dry. The trip was becoming quite pleasant for all. I passed a couple of Life Preservers to Durant and Camelia, and pointed to the bow of the Barco. I wanted them to enjoy a few moments alone in the beauty of the St Johns River.

As I was looking at the chart plotter, looking up I noticed they were putting on the class one lifejackets...

I went forward with a couple sodas and said that the jackets were to be used as cushions to sit on the wet deck! (I also took pictures of them looking silly... on their camera)

It was snack time and I served up some sandwiches and peanuts as we cruised slowly under the Highway 17 bridge.

"Mark Twain once cruised by riverboat into Doctors Lake, back in the 1880's and he wrote about the experience," I explained.

We cruised into the lake until we got as far as "Whitey's Fish Camp", Ahem...

The Spousal Unit took over the driving as we left the young couple sitting up front enjoying their spontaneous quiet moment on the bow.

Time passed and we reluctantly headed back to the Base to leave Durant and Camelia back with the rest of the Wounded Warriors. There was a big barbecue and the NAS Jax Navy band provided the background music.

Barco SIn Vela passed our passengers ashore and we headed home to our berth at Florida Yacht Club  in the warm afternoon, happy to finally be dry and also that we had been part of a big event for the Wounded Warrior Project.

After mission report; There were about 20 pax on "Moondancer". There was a balloon artist and buffet onboard, the children spent three happy hours being entertained! "Warrior" took onboard about 16 Passengers and there were great reports of the good times had by all. Sailing Vessel "Ruack" had about 8 passengers and they actually put out the sails and SAILED! Outstanding, my congratulations to that crew and my envy for them being able to sail.

The inclement weather made it that half of the Warriors did not make it as planned, and I don't blame them a bit. It was truly a major effort to get the Guests and families both into the boats and back on the shore safely. This happened as a matter of routine and fact due to the huge efforts of the Navy Jax Yacht Club (Lee and Cheryl LeDoux!) and the endurance of the Navy Jax Dock Crew  ( Bob Sharkey CAPT USCGR Ret, Steve Spickelmier SMsgt USAF Ret, Dave Bailey AOC USN Ret, and finally my old HS-85 shipmate Brian Paul AW1 USNR-TAR Ret). Those guys stood in the driving rain for four hours making sure that all the precious cargo was safely handled. That surely was the toughest duty performed that day!

As for kudos due on the Barco Sin Vela; All thanks, respects and praises to Phil (RMC USN Ret), who bravely stood on the bow handling lines while I was warm and relatively dry up in the flybridge during all aspects of docking and undocking. As a partial repayment for his performance, Phil gets to come over for slow cooked Boston Butt this afternoon, served with massive flagons of Sierra Nevada Pale Ale. 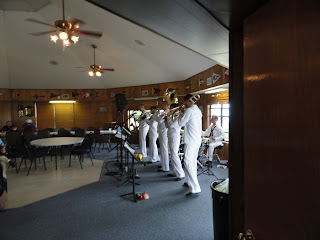 I was too wet and miserable to document the other boats while we were in the docking phase of the mission. I regret that, but when I drive a boat I try to focus on the job at hand. Besides, the camera was in a bag under the sink and I could not pause from driving to get it!

Saturday turned out just fine and I look forward to trying this all out again, but next time in better weather.

A shame about the WX, but it's good you had a fall-back position.

Great pics... and once again: Good On Ya.

Thanks, Buck. We always have a nice time, whether others are involved or not.