Yep. We did indeed make the big trip and have returned to tell the tale.


We were scheduled to leave by four o'clock Friday, but I was waiting for the UPS delivery of the Spousal Unit's Prize which did not show by five-fifteen. So we hit the road a bit later than was optimal, oh well. I didn't know that the lateness of leaving would affect us at the other end, because it was dark at the island!

The St George Island dwellers are very much in tune with the protection of the endangered sea turtles who nest throughout the area beaches. So a local ordinance makes it illegal to have outdoor lights shining in the direction of the water from April to the end of October. This meant that we would have to search for  a half hour for our beach house. You either know where it is or not. Believe me, we were lost. We drove up to the wrong house at least six times.

We finally got in at ten fifteen, a bottle of white wine and champagne were opened to ease the tension from the trip. We admired the dark beach from our balcony and finally got with the spirit of the weekend.

The next morning we were up with the sun and enjoyed brekkies on the balcony. Our neighbors commented on our previous evening's fumbling about to which I answered that I was miffed, too. But the lights have to be off for the turtles, so I understand... 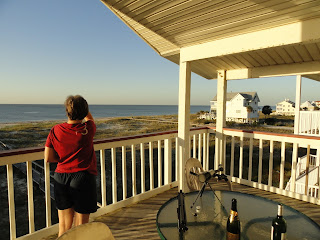 We took a careful walk on the beach (Ankles!) trudging about a half mile on the sugary sand. 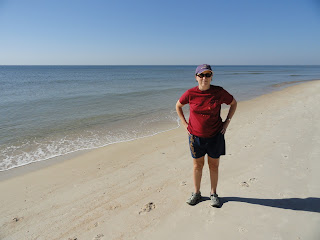 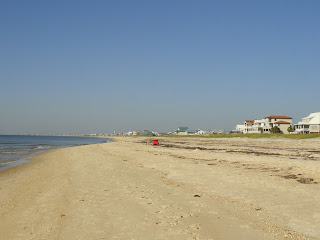 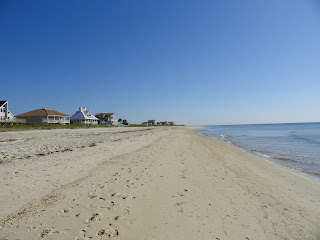 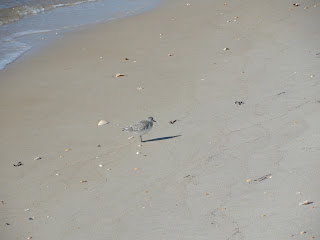 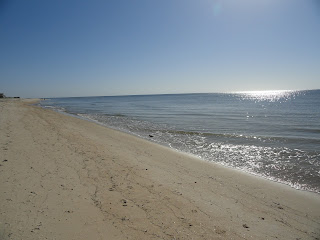 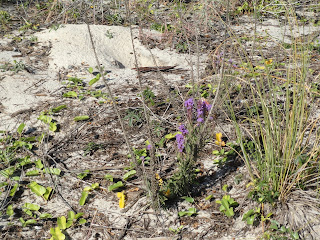 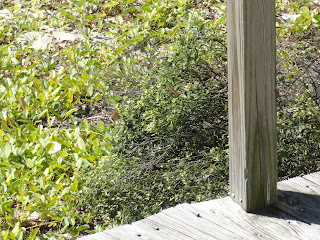 After cleaning up, we went to the center of the island to have lunch by the shore. The place was called the "Blue Parrot". I guess the name was pulled from the film, Casablanca.

The food was pretty good, we had a dozen oysters and a basket of crab claws. (My first time.) 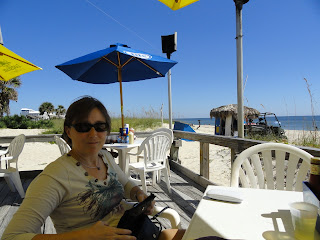 We had the house for two nights and we wanted to stay a third. Since our house was unavailable for Sunday, we went to the St George Inn and scheduled a stay for Sunday night. All business was complete, so the Barco Crew went to our beach house to relax and begin slow cooking a rib roast. (200 degrees and two hours...)

While enjoying a beer on the balcony, I spotted a shark swimming along the shore. I didn't run down to video the fish because I figured it would be gone by the time I got my gear and trotted there. Wrong. The shark cruised back and forth for about fifteen minutes.

My apologies for failing the reader on this account. That's ok, I also missed a shooting star that came down off the beach at eight o'clock the next morning, we heard it and saw it flare out in the sunlight.

Dinner was held at sunset and we had a very nice Languedoc Red with the roast beast. After relaxing over some more wine and beers, we closed the house up at around ten o'clock. 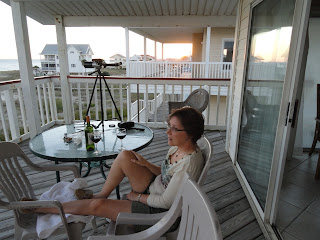 We cleaned up the house and were underway by ten on Sunday morning. We took a drive over to Apalachicola, and admired the nice Marathon runners who were all over the roadways and bridges. It was a beautiful sunshiny day, the kind that make you glad to be in Florida. It was about 75 degrees with unbelievably clear skies. Definitely a rag-top day! 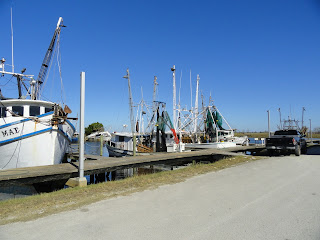 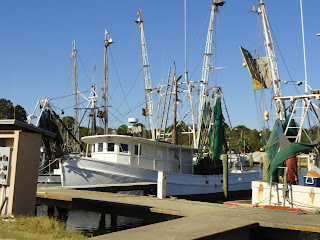 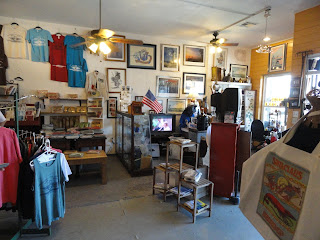 We enter an old tourist shop in downtown Apalachicola. The gregarious shop keeper sold us a couple of t-shirts and showed us a film starring John Hurt, which had the shop keeper (John Lee) played a small part as a local Southern Sheriff. Cool story and fun to watch the film bit! We then went into the "Bowery" and had lunch on the waterfront. 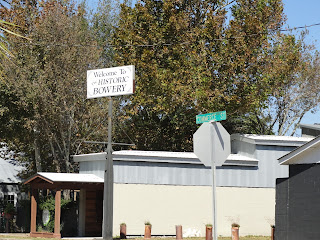 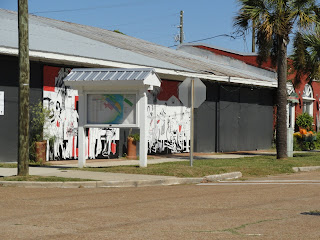 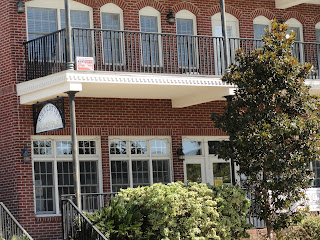 We planned to stay at the Inn and finally go out to the club across the street called, "Eddy Teach's".
It was a fun evening of music and meeting some very interesting people.

We met an Air Force Retired guy at the bar, who was chatting with another interesting person who was in the medical research field. So I get involved with the conversation and everything was going nicely, until the Air Force guy had to go. He was walking across the parking lot (using his cane for support) when everything went wrong... I watched our friend fall in a heap into the gravel, landing face first. I was up and running from the bar followed closely by the medical guy. We got our friend up into a chair with some ice on his face to help staunch the bleeding.

Picture the three of us, and then the owner lady comes out and we all pondered what to do... The Lady wanted to call the EMT, but the medical guy didn't want to do that... See, the EMT was allegedly off in another bar, hammered. He would not be of any use and the police would probably get involved, along with Fire and Rescue.

I asked if there was a possibility of getting a cab for this guy, I'll even pay for it... Nope. No taxis on the island!

The only solution was to pile our injured friend into his pick-up and drive him home. I will follow in my truckster and bring back the medical guy.

So that's what we did, only we then had to walk our friend up three flights of stairs. Our injured friend has limited mobility due to hip issues and a previous stroke, so we had our hands full. We got our friend upstairs and then got him undressed (he had an accident; nuff said) and left him on a comfortable chair. We refused the money we were offered, we did this because he was a veteran and we would not let him down.

Driving back, my new friend was commenting about the trouble he was going to be in with his wife. Seems he was only supposed to be out for a few minutes and not the hour we spent.

I said, "Yeah, but we had to do this good deed. Just explain that to the Missus".

When we got back to the bar, the owner greeted me and I told her she owed us a couple beers, which I did receive later on. My tab was adjusted for $20 bucks, which I gave as a tip to the hard working bar staff.

Eddy Teach is the Go-To place on St George Island!

They even had a Led Zeppelin tribute band playing in the parking lot. Too. Much. Fun!!! 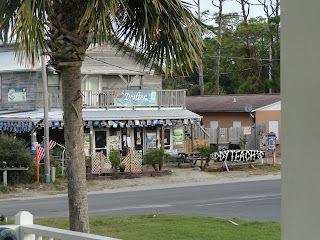 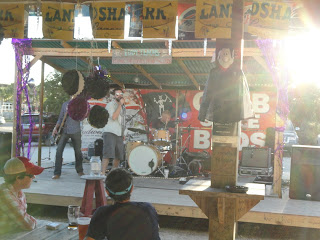 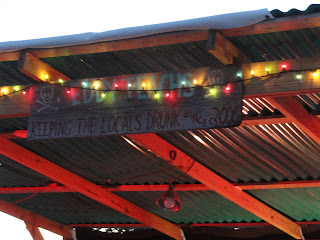 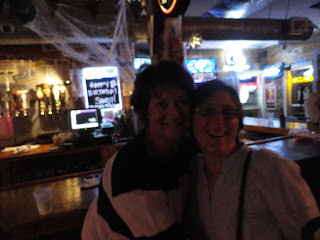 We left the bar at about nine o'clock, and stumbled our way across the street back to our outside sitting area where we could observe the crowd and listen to the music in a cheaper style. With wine and cheese for a night cap.

Monday morning we were up early, as usual. The decision to drive home via two lane highways was made and we departed St George Island. We turned on to Hwy 98 heading East along the Florida Shore. 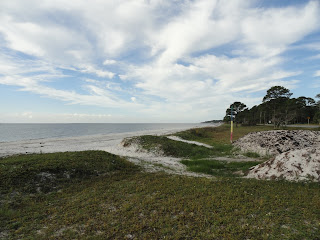 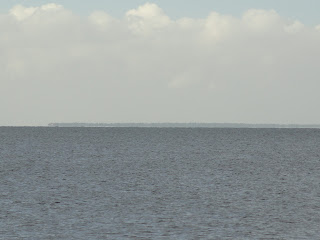 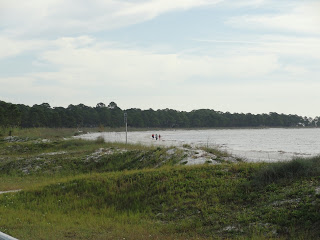 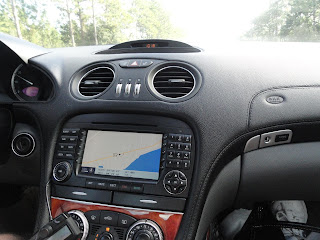 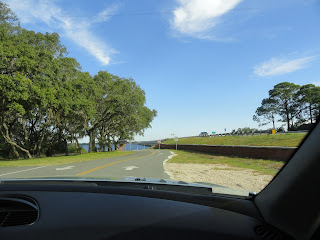 We were glad to get the chance to be off of the Interstate, the speeds were usually about 60 and there were hardly any other cars with us for most of the trip. Interesting factoid, we were able to see four prisons while on the old roads. I thought of the Gulag Archipelago, a chain of prison islands surrounded by razor wire coral reefs, in a sea of pine trees.

We stopped in Mayo Florida for a barbecue sandwich and a break. We turned left onto highway 27 and then connected with highway 90 which brought us back to Jacksonville.

I think that you are having far more fun than is healthy ;^)

LL; Thanks for coming by. We are having as much fun as we can in honor of those who cannot. We have a friend deployed to AFG and he reads this blog... know that we drank all the wine and beer!

Looks like a great time ... and gorgeous weather! Love those Tahitian pearls too!

K&C; The weather in Florida was top notch! Wish we were sailing...

What a great good time, and such marvelous pics... thanks for sharing them.

Were those crab claws of the Stone Crab variety? If there's ever anything that would make me move to FLA it would be Stone Crabs... Gawd, but I LURVE those thangs.

Buck; About the claws, they are the Blue Crab variety, dipped in corn meal and fried. It was my first taste of that variety, too. I like the stone crab claws a bit more because there is more to eat and it's a bit more healthier, fat wise.

Come on out to Florida! The weather is here, I wish I was beautiful...