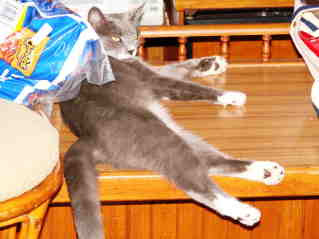 She is a stray who chose to live at our home. Like we needed another cat.

Big problem; the Siamese girls, Mali and Saffy, are kinda feral. And they hate Non-Siamese cats. It has been a year, no mercy, no quarter.

Hyacinth is a "British Street Cat". She is HUGE, and should have no problem sorting out the Meezers.

Nope, she cowers and cries when they attack. They cut her up when they can. So Hyacinth has to live separate from the two girls. Major pain in the backsides. 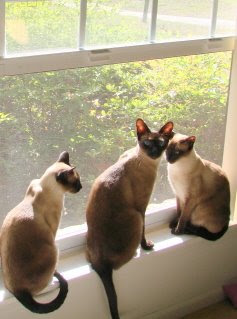 Mao is bookended by his Girls.


The small Siamese girls look so loving, so precious. But they aren't. In fact, they are feral and vicious!

So today, Hyacinth is on the boat, at the moment. (We went to the club last night, and instead of driving home, we stayed aboard Barco). We bring the cat because she really likes the boat. It is incredible, the pleasure she has just lounging around the boat.

Just like her humans. Dogs have owners, Cat's have Staff.

So Hyacinth has to live separate from the two girls.