Saturday View out back and Beer testing 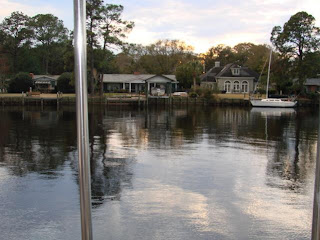 We had adequate weather, last weekend onboard Barco. Maybe about 65 degrees, and there was rain in the evening.

The above picture is a view of Pirate's Cove, looking from the Sundeck. Not too shabby.

The next picture is the view to our Port, but really it is to the right as you look to the stern. 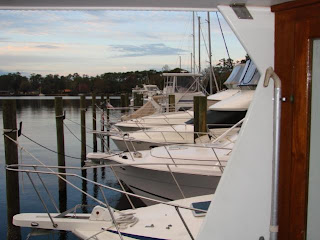 Saturday was quiet, we sat out back with Hyacinth while nibbling on chips and cheese. Went over to the club for some better victuals, but all we could get were wings that came off of a Cornish Hen. The wings were tiny.

While snacking, we watched the "tennis" crowd came in and ordered drinkies to go, and laughed as the Bartender tried to offer free tastes of "Bold City White Ale".
http://www.boldcitybrewery.com/ 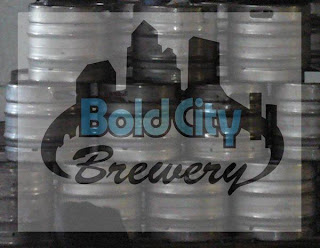 I have never seen people pass a glass of free beer back, unfinished. The White Ale purports to be (this ripped off from their website): .."

Our lightest beer; is a Belgian White Ale. Brewed with white wheat malt, Coriander and Bitter Orange peel. This refreshing Ale is pleasant on a hot summer day or a fall afternoon. Try it with a wedge of Orange.

I thought Burt Reynolds and the rest of the Miller Lite Man-Law crew have already made it a Man-Crime to fruit the beer.

Try it with a wedge of orange??? Whiskey Tango Foxtrot????? I supppose some snob will claim that there is a "Licorice finish, with a hint of Elderberry.."

I watched at least six people refuse this beer. Even the bartender said that the Ale tasted different each time she tried it this week! (Of course, I found this simply Hi-Larious) I really want to like this beer brewer, SO I will try out their India Pale Ale, the English Ale and the rest of their offerings. Also just to set something else straight, I have never liked Belgian Beers, or for that matter Weiss Beers. But the Belgian beers like Hefeweizen were drinkable, even for me.

Of course, if you are buying, I'm drinking! Just not the Bold City White Ale.

One has to have standards!

The rain started coming down, and my jokes were falling flat on the Spouse and on the Staff. Time to go home to the Barco, and kick on some good tunes and break out the snacks and more reasonably priced refreshments.

Our lightest beer; is a Belgian White Ale.

I think that's the problem: losing focus. One can make a passable light beer (it IS possible: Labatts Blue Light), or one can brew a Hefewiezen... I submit it's hard if not impossible to do both.

I commented on the Miller Lite (ptui!) ad before I read this post... obviously. Here's hoping Bold City's IPA and such are better than their "lite" Hefewiezen...