Back in on Monday. Spent the weekend on the Barco, enjoying the clear skies on the water. Took a little trip south of the Buckman and enjoyed a boat-free river. As far as the Barco crew was concerned, we OWNED the river!

I am waiting for my copy of "Deep Water", a Documentary made in 2006 about the Golden Globe round the world sailing challenge of 1968. I ordered from Amazon and it should be here today. Our sailing buddy is in the film as he won the race by outlasting most of the fleet and made it back to England in eight or nine months.

I read the story by Robin Knox Johnston, "A World of my Own", probably around 1974 or 1975. I never really forgot the story and naturally, when the sailing bug bit, I reread it. When Spousal Unit and myself moved to London, we went to the London boat show and met with the folks from the Little Ship's Club and immediately joined.

About that seemingly disconnected paragraph above; RK-J's "A World of my Own" is the author's version of what happened during that lengthy race. There was an unanswered question at the end of the book, concerning the state of the Author's marriage.

Moving ahead to 1996, I was at the Little Ships Club, where the President of the club was doing a meet and greet with new members. Spousal Unit and I did the routine Hi-how-are-ewe, brief bio and decided to dash out before we became boring.

Note: When ever you meet someone famous, like a rock star or personality, know full well that they really are quite bored with the normal banality, "Oh, urr sooo great, I have all your books, seen all your movies, blah blah blah..."

They don't care. Really. In fact, all they want to do is go off and get out of the crowd and hide in some quiet place.

That said, Spousal Unit and myself were trying to slip out the door to beat the Famous Couple outside, and decide which pub dinner would be best to dine. This is when Mrs. Knox-Johnston approached us near the door and as if reading our minds, "You're not leaving... are you? Robin would like the honor of your company at dinner with us both."

Well, what the heck... I was surprised, to say the least. In fact, some of the more prominent Club members, hoping for a place at the table... themselves, were completely surprised.

So we sat for the dinner. We made small talk about what I did in the Navy (Search and Rescue and Anti-Submarine Warfare), duty onboard Frigates and Destroyers. Robin talked of his own Naval Service, and the fact that he was friends with the C.O.'s of the Missouri and Iowa. It was a great dinner, with a great teller of tales, and the beginning of a four year running acquaintance. (We would share drinks after eleven o'clock, Club closing time, after the crowd went home--then he would tell Lynne and I how to plan and execute our own Trans-Atlantic cruise).

He asked if I had any questions about his book, and I think he was quite pleased with my cleverness; "In the final chapter, you leave the reader hanging, concerning the pending divorce. "What ever happened?"

Tuesday: I couldn't find the actual pictures of 1996 with Robin and his Lady, but I have some from a year and a half later:

This is Sir Robin Knox-Johnston after giving us the "Alderney Tankard" award for publishing the best sailing story for 1997 in "Little Ship" magazine. 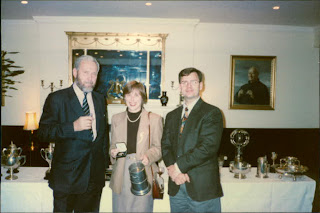 Sir Robin is the President of the Little Ship Club.

One cool thing: That man has an unstoppable memory. Spousal Unit ran into him on the streets of the City of London. He not only remembered her name, but her father's name, whom he had met a year before!

History:
The Little Ship Club was founded as a private members club in 1926 to bring together yachtsmen and women working in the City of London who wanted to meet and exchange ideas during the long winter months. It rapidly became renowned for its classes in navigation and seamanship. In 1937, the club was awarded the right to fly the defaced Blue Ensign for its contribution to training the Royal Naval Volunteer Supplementary Reserve. 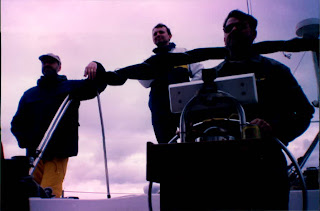 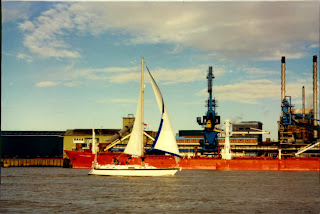 I dumped the nice comments because I basically stepped all over the original post.

I was wondering how I missed all this goodness, and was going to say as much. Now I see...

This is a GREAT post, DC. I'm most impressed.