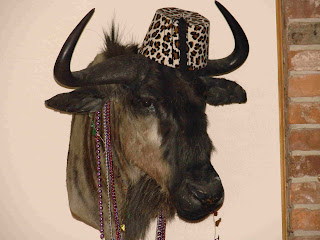 Wilbur J Wildebeest wears a Fez because he can. He is a swingin' hipster who lives in the billiards room of the Serengetti Spa and Veldt Lounge

I loved that line in an old Cheech and Chong album. How funny it was in the seventies, and I always wanted to say it. Done.

Today's screed is brought to you nice people by the letter "P".

I mentioned a few posts ago, the need for all to be ready to deploy to far off lands for testing beers and wine from other climes. Today we review October's trip to Cooloongalook.

The deployment order was received from COMNAVHOMEFRONT in June. She who will be obeyed instructed yours truly to comply with the invitation for a housewarming party, and make reservations on United. Four months early.

Now, I never do anything that far in advance. To be honest, I was trying to passive/aggressive my way out of actually going. I do it all of the time; it gets me out of doing something the Spousal Unit wants me to do. You know, like yard work. (That is definitely something for others to do...)

Anyway, so I book the 5000 buck round trip tickets (didn't I say I was trying to get out of this duty?) and all is harmonious at the Serengetti Spa and Veldt Lounge.

By the way, we couldn't afford all of this. But has no bearing on the mission, right?

We take off from Jax at @1300 and make way for Chicago. There at O'hare, we have a four hour layover. So we go to a roosting spot and do some roosting. There was a Marine standing by the bar looking lost. So we offer him a drink as thanks for his service and have him sit with us and chat. He has two, and actually tried to pay for his drinks!

Meanwhile, the bartender has been keeping track of our many drinks and brings us our tab; 31 bucks for three and a half hours of constant drinking! I was stunned, since I had consumed at least eight beers and She who will be obeyed had at least five wines. Not to mention the young Marine's drinks. I mentioned that the tab was looking a little "light", and she should recalculate.

"Since you were so kind to that Marine, I could see that you were both fine people who might appreciate a break in your bill as a 'thanks'", she said.

That young lady got a 25 dollar tip.

So we stumble to our flight, with happy vibes coursing through our heads. We shared a session of giggling while on the takeoff roll. Snoozing became our routine for the next three hours.

We arrived in SFO with the beginnings of a well earned hangover. We shuffled through the international waiting area and were shoehorned onto a 747. Good thing we paid for the "Economy Plus". This gave us decent seats on the wing area with adequate leg room for my short legs. We spent the next 14 hours in various states of grogginess/snoozing/stiffness and finally gaseous pain from "Boyles Law" taking over in our bellies.

Note to self: Be sure to take Beano on flight home. 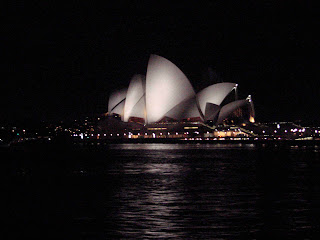 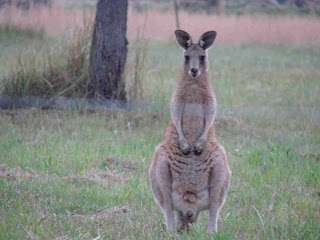 It was a three hour drive up highway 1 to Cooloongalook. 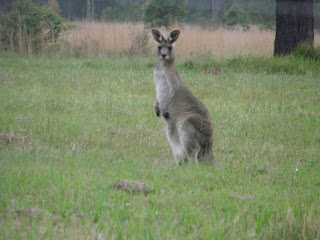 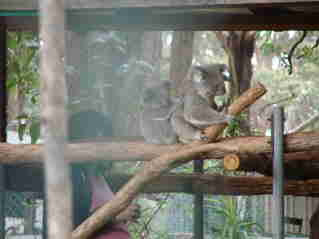 The wildlife above were everywhere to be found. The kookaburra's are hilarious, waking us up with that oo-oo-oo ahh-ahh-ahh oo-oo. Like they were laughing at us.

I couldn't get any pics of the stars due to my ham handed photo skills. Very bright and very foreign. Kinda scary, since nothing was familiar about the constellations.

The beer? Horrible. I tried to choke down as much as possible so I could at least be sociable. I never saw "Foster's". The locals say that Foster's is crap that has to be exported to the Yanks.

Well, I choked down a few 12 packs of "Victoria Bitters". Nothing like "bitters" in the UK. Kinda resembles "Meisterbrau" of the mid eighties, only more bitter tasting. Beer is VERY expensive, about 14 bucks a twelve pack.

I may not have appreciated the finer beers in Australia, but I made a real Navy try at keeping up.

The "Nelson" pub in downtown Sydney had the finest beers on tap. We ran up quite the tab in short order. I will make my way back to that pub in the near future.

We wrapped up the ten day visit with a proper Indian dinner in the dining district. Very affordable, we fed eleven New Zealanders, South Africans, Scot's, and Welsh (Is no one from Australia???) for about $160 U.S. Very, very nice, we left stuffed.

The trip home was relatively uneventful, excepting that a fine Flight Attendant gave us a bottle of Bubbly to celebrate! (I told him that I wanted to purchase some champagne to celebrate my wife deciding to stay with me...)

Have a fine Navy day.