Over the weekend, maybe not enough. Definitely too much beer drinking, I had enough on Saturday to last me a week.

Sunday morning was a bit cloudy and storms were predicted for the afternoon, so underway we were at the crack of 1030. As we passed the sailboaters, we made sure to get some action photos of them under sail. 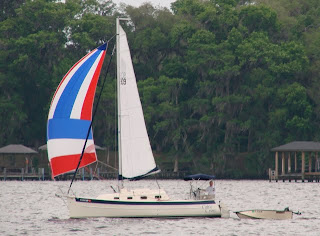 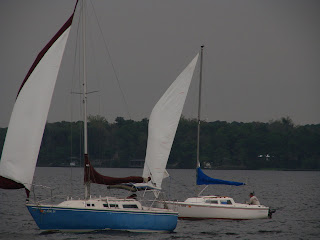 We had our Navy Jack up (Thanks, Gary G!) and headed north to dodge the weather front. Winds were southwest at about 20 knots. Uncomfortable until we passed the Shands Bridge.

Celtic Cross was at Black Creek and the other two boats were about five miles past them.

Very nasty day to be sailing.

We arrived at the base at 1330, just as the first thunderstorm arrived. Winds picked up to about 30 and lightning began it's noisy show. We decided not to stop at the base to drop off Phil, the wind and waves would have dashed us against the F-Pier so we smartly turned east and north to the Yacht Club,

Pirates Cove was getting slightly squirrelly in the thunderstorm, but we expertly placed the Barco between the uprights and docked just as the heavy stuff arrived.

After the tie up was complete and the packing of trash was ready, I turned down the offer of the post boat-trip beer.

That's how fragile I was feeling.

Dropped Phil off at the base via truck and returned for the Spousal Unit and we departed for home.

At least the Kitteh's were glad to see us, I have a Mali cat watching me as I type!

Our friends on "Beaujolais", Roger and Janice, have arrived at Hiva Oa, Marquesas! I think it was a 22 day trip from Galapagos to the Marquesas, I look forward to reading about the journey.
Posted by Barco Sin Vela II at 5:13 PM