We are back, finally 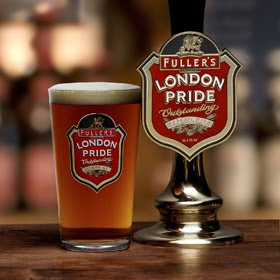 After our nice guests left last week, there was some hustle and bustle to get household business back on regular track. A new keg of Fuller's "London Pride" was acquired on Friday, and everything slid down hill from there.(Here is a discussion on brewing London Pride)

A nice Prime Rib was roasted on the Weber Grill which was served with green veggies and a fine bottle of Cabernet from Napa. While figuring on a dessert, a phone call from my good buddy Phil was received.

I guess Phil could tell that new beer was presently available.

Phil was given the "ok" signal to approach the Serengetti Spa for replenishment, and Phil phoned El-Mer, another one of our ne'er-do-well crew of good time seekin' fellow Navy retiree's.

Fifteen minutes later, there was a great hub-bub as we all went out back by the pool for night time beer swillin' and for some, cigar smokin'.

I insisted that all reveler's stay the night so as to prevent any unsafe situations on night time roadways. Besides, we have two spare bedrooms. Taps was called at 0100 and all good Barco Crew were sent to their bunks for much needed rest.

My physical situation was quite deteriorated by 0800 the next morning. I think I contracted some kind of flu, and had it been Monday, I would have had to phone in sick. So I got up and cooked a package of bacon which was served with a large bowl of red potatoes that had spent time with hot oil. And eggs. Flu has to be treated properly with greasy diner-like brekky. That's what I always say.

After the last guest standing (Phil) had departed at 1130, I retreated for an extended session of inspecting my eyelids for light leaks. After a tough night of trying to empty that keg of it's contents, I was sure that the collateral damage would surely be ocular.

None were noted despite three hours of very intense, careful inspection, with the sure and everpresent help of the Mao and Mali Cats. Them care, ya' know?

Absolutely nothing was accomplished for that Saturday. Or Sunday, for that matter. My new moniker could be "Johnny Sloth", alright.

This week has been another futile five days of trying to pay taxes and sell quality Auto and Life insurance. Hardly anyone buys, they just rebuff my offers by claiming penury. Just can't afford to protect my family after I'm gone, that twenty bucks can be better spent on something else. This is always a big frustration on my part since many of my customers really do need a small term policy in case they check out of life early, leaving children and spouses to make it without the passed on person's presence or paycheck.

We all have so many unwanted bills that seem to keep piling up and when there is a chance to say "no" to a new bill, they do it. Since none of us likes to consider that life may indeed be finite, it is easiest to just ignore contingency planning.

Maybe it's me not selling properly. If I could sell four life policies a week, I would be doing much better in doing a bit more for the household budget. Plus I like to think that my customers would really benefit from protection. We lose about two customers a quarter who successfully attain room temperature/forgot to wake up.

I really hate getting that phone call from a grieving family member, usually at 0900 in the morning enquiring if there is any other insurance besides auto or home? My regretful reply is almost always to the negative. I never say this, but usually the deceased thought it was too expensive... Especially when that person was 27, or 32.

Ugh. Sorry about whining, this blog is supposed to be about more positive subjects.

There is six and a half hours to go until I yabba-dabba-do my happy self out into the Florida sunshine for the big weekend. I think there will be some boating tomorrow on the St Johns river. No destination in mind, just buzz over to the base to see my no-account good time friends and spend some time in the sun.
Posted by Barco Sin Vela II at 5:44 AM

The economy is getting worse and people are cutting corners in the hope of making it another week.

I was called to jury duty (of course I was not selected for the panel due to my background) and fully 75% of the people there reported that they were unemployed. Southern California has been especially hard hit by the recession. There are a LOT of closed businesses where I live and it's not improving here. I'm not whining because I'm fine - but it's depressing watching so many other people struggling.

My point: Jumping on the boat and leaving the veil of tears is a welcome relief.

Thanks for coming by, LL. I never get the chance to serve on a jury...

Florida is still doing better than I make it sound. Could be because we don't have a state income tax, for now.

I would rather hop on a boat and leave for a cruise until Nov 2012.

Ah. London Pride. It has gotten the better of me on numerous occasions, as well. Yet I kept going back for the re-match. We never learn.

Your tales make me wanna re-locate to a place that is better served as far as beer choice goes. As a matter of fact, I saw a News Hour episode about the massive hit real estate prices have taken in the Tampa/St. Pete area... and I would not be above taking advantage of other peoples' misfortune where newly-affordable housing is concerned. But inertia is the second only to gravity in the pantheon of Strong Forces. In geezers, anyhoo.

Hey Buck;
Check out the low prices in the Northeast Florida area. Very affordable and close to all the important stuff, Commissary, Hospital. Plus you can still get Homeowners insurance up here. Not so much in old folks central, Central Florida.