So I'm back on the early days kick, this because I saw some of the early photos.

The Spousal Unit and I really had some good times. This was from a sense of urgency that Military folks and their families regularly feel. You may only see your loved ones a day or week at a time. Navy folks will remember that we deploy at pleasure of those we serve.

My point is that out of the first five years of marriage, I was usually gone. Every day at home was to be lived to the fullest. As an aircrewman in a Navy helicopter squadron, there was a better chance than none that we would either be going or coming to some far off place. Some of my peers did not come home at all, so One just never knows so live it up when you can.

Live it up we did. A bottle of Mt Gay rum, two liter bottle of coke, limes, Jimmy Buffett or Bob Marley, friends, pour all into a sailboat and shake. Life was really good, when I was home! 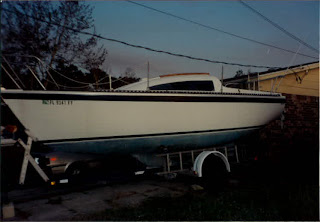 When I returned from an almost seven month deployment on the Strike Trawler Deyo, along with the best welcome a Sailor could get, my loving Spouse showed me a little boat on the way home that would start us off for real on that sailing dream.

This Sovereign 7 Meter, built in 1979, was waiting on the side of Atlantic Blvd with a "For Sale" and the $7900 scratched out. Next to that was a $6900 and $5900 scratched out. $4900 American Beer Conversion Units could make this boat ours. We literally counted change from our large coke bottle (over 400 bucks!) and I had a paycheck or two on hand. 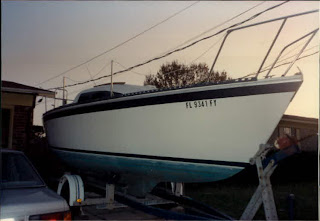 The deal was made for $4300.00 and I towed the boat home. It was like being a new father! I brought over a couple guys from the Detachment to show off the new boat. I reveled in the envy. Only problem was that I had to go back to sea the next week.

During the previous seven moths, I flew with a LCDR and a LT (usually on a Air Detachment, we had two complete aircrews and we would fly with the same three people routinely. Sometimes it was because of convenience or personalities meshing. The Officer in Charge was a "Born Again" type, and he preferred to fly with the other aircrewman, leaving me with my two buddies Steve and Lee flying, with me in the back.

Instead of constantly talking about girls, port visits, beer and the usual, we talked incessantly of boats and sailing. I had a video tape from MacGregor Boats, and we would come back from liberty beered up and would slap that puppy into the t.v. Once, we measured out the 26 feet of the MacGregor and taped the flight deck in the shape of a sailboat. We were jazzed on the idea of being on our own boat vice the Navy kind. I couldn't afford a new MacGregor 26, so I had to wing it.

Lee came back from that cruise and bought a 26 footer and I got the 23. Steve never did get a boat, his loving wife wouldn't let him. SO much for being a Lieutenant Commander with all of those priveleges and authority. 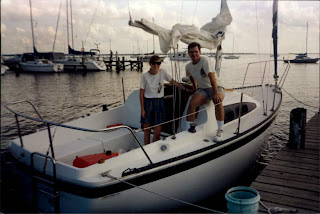 That was the first day in the water and was it was intoxicating, to actually have my own boat in the water. Life was exceedingly good! 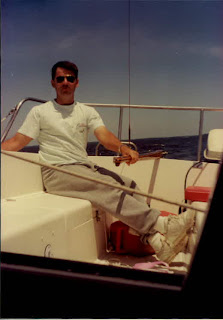 Check out the torque on that tiller. I seriously had no idea how to trim sails or balance the helm. That, there is called "weather helm". But I looked really cool driving.

A few moments after after the previous picture, we learned about rounding up involuntarily. On minute heading north pulling a lot of strain keeping course, the boat tilted a little too far and VOILA! We were now heading on a sort of westerly course! So I had to look cool to my new bride, I snapped of a quick, "This thing tacks like a Yak"

What happened was the rudder had left the water and no longer was providing stabilization and a straight course so the boat turned into the wind that was driving us. Kind of a safety feature. Sorta not. But the Lord watches out for fools and drunks and I was the former.

She who will be obeyed coined the new name, "Wildebeest" which is in honor of the National Geographic films showing herds of Wildebeest' suddenly making 90 degree turns while in full gallop. Quite exciting...

That name was judged to be right and correct. And the Wildebeest promptly ran into a piling when I lost directional control while traversing the Doctors Inlet bridge. You can see the new custom bend in the bow pulpit in the next picture! 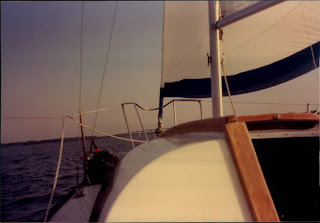 My buddy from home, Rich, in his natural environment, usually towards front of boat with a smoke in hand. 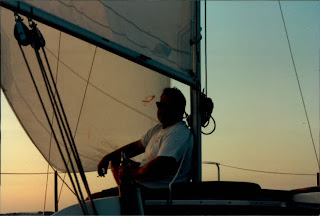 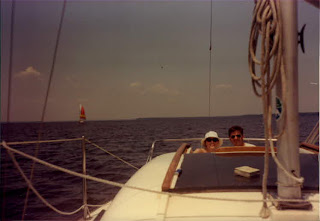 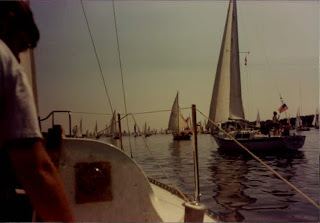 Great memories. This boat got me through five years of sea duty because each time I got out on the water, it was like a real holiday trip.

If you can, try out sailing. If you happen by Jacksonville, I can arrange it for you. 'White Lightnin' is a San Juan 28 which sail much, much better than the ol' Wildebeest. (P.S. You can buy 'White Lightnin' for 6K!)

But you have to buy the beer and snacks for the trip!

Sometimes, when a couple of boats are near each other, either a race or party begins. This photo shows our buddy Dave and his boat "Niagara", on a typical Saturday night. I took the photo and She who will be obeyed is the good looking one. 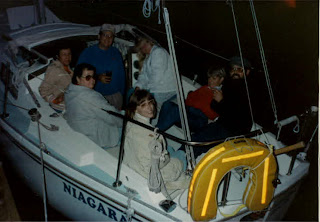 Have a great Navy day!
Posted by Barco Sin Vela II at 7:44 AM

If you can, try out sailing.

I love being a passenger. And sailors throw the BEST parties! (REAL sailors, as in SAIL boats, not power boats... the difference being constantly hammered into my thick head) I know this because my one of ex-'s cousins was a life-long (competitive) sailor on the Great Lakes until his untimely death a few years back. Every year while I was living in Detroit he and his sailing buds (read: crew) would come visit and stay with us while the DYC's regatta was in progress. I may have been to wilder parties in my life, but I can't remember when... ;-)

I never was bitten by The Bug, tho. And that may have been a Good Thing, judging from the money my sailing friends threw into those sink holes they called "boats." But... Hey! Whatever floats yer... (Oh NO! Did I really begin to say THAT?)

But I am a sailor who is learning to like the stink pot! We have more room to spread out, onboard Barco Sin Vela.

Grab a hop to Jax. As the Droogies say, "Initiative comes to those who wait!"