We put the little boat in the water and headed across the river for the first Card station. It was bumpy, and our little boat could barely go fifteen knots into the wind and waves. It was quite brutal, our kidneys aren't too happy with the abuse and the pounding was getting a little unnerving.

The second station was in the Ortega river which was smooth and we managed to make some time. There was a third stop at some one's home where we all had refreshments before heading across the St Johns a second and third time.

On the third crossing, which was the worst, we noticed the boat trying to lean right. We motored on and soon were reentering Pirates Cove for the fifth and final card. We taxied up to the dock and tied up.

Upon stopping, we noticed that the boat had about six inches of water, which annoyed the heck out of me, since I had repaired the bilge pump yesterday, and it should have kept the boat dry. This was something that should have been working, obviously the pounding had dislodged the pump.

We started to bail with a bucket, when I spied a stream of water coming out of the bilge pump drain hole. And the water level was increasing instead of receding.

I hopped out of the boat to get the truck and trailer, got halfway to the trailer when I noticed that the trailer lock key was still hooked to the ignition on the boat!

The chain was on the trailer so I tied it to the bumper and brought the truck around to the ramp. I hustled over to the boat and got the key and asked that the motor get started so we can get the boat moved before it goes under.

Bill and his son Ryan were there giving help to the Spousal Unit and Bill climbed in and drove the Bateau to the ramp. I backed the trailer into the water and got out to help pull the boat on the trailer, all the while there was furious bailing of water.

Bill hooked the wire cable to the loop on the bow while I pulled the engine into the stowed position. I hopped off the boat and got in the truck and pulled the boat to safety.

You should have seen all the water flowing out, it ran for at least three minutes.

While the boat was taking a pounding from following seas, the motor slammed forward and knocked the plug from its hole, allowing the water to flow unfettered into the boat. The only thing keeping us afloat was our moving forward. Once we stopped we resumed sinking.

Here is the offending plug hole and you can see the damage caused when the motor ripped out the plug: 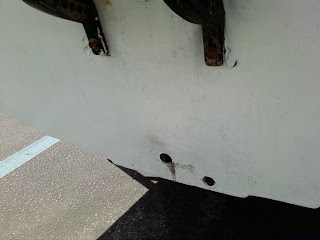 These are a couple of plugs that I still have, not the bent pin, so this means the motor has done this before. 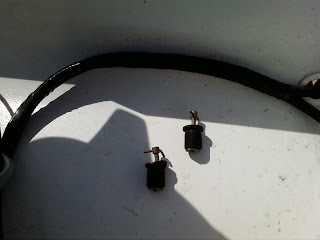 We parked the truck and trailer and headed to the club for a beer.

Thanks Bill and Ryan!

Yow! I'm glad you got her out of the water before worse came to worst! All's well that ends well...

oooh, too funny...I was going to comment "All's well that ends reaonably well"... Buck kinda beat me to it :)!